It's not made of poop. It's made from the remnants, that is duck egg whites from the eggs made into jala mas. Tahi can also mean remnants instead of poop. But is usually understood as the latter.

My Kelantanese friends never introduced this to me. Instead I got to know of its existence through Raykinzoku's site. After thoroughly reading the site, I found out that he is the brother of my colleague in Selancar. I noticed the relation because of one post.. the one regarding the earthquake and so I called up Sofia. The funny thing is that Sofia doesn't know her brother has a blog until I told her The world is kind of small. It's been years since I last heard from this dear friend.

Ok ok, It was through this site that I found a family who made very delicious Kelantanese fare, so good that they supply to the palace for royal occasions. Raykinzoku knew because he is one  :) I was so glad that the royal kuih maker resided not far from town, quite near the hotel where I stayed when I visited Kota Bahru. But I did need to ask around to make sure I got the right house. Even my fluent Malay can't get me around town much as I can't understand them, but they can surely understand me.
The Kelantanese speak in a special dialect that is indigenous only to the Kelantanese that outsiders may barely understand. 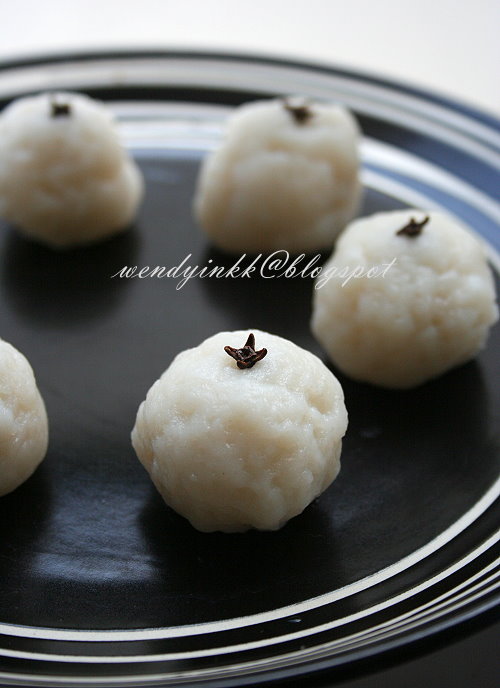 When I got in Nik Yam's house, (they prepare and sell their fare from their home), I saw this pile of white thing with pandan shreds on top of the counter. I asked for Akok and jala mas. But they asked me if I wanted some tahi itik to go along. I asked how do they sell it, they said as much as I want. Now that's tricky. LOL. They don't roll into balls like how I see it on the internet, but in one big pile.

I asked for RM 2 and they gave me sooo much. Then as I see her piling it on, I quickly asked if I can reduce it, she removed it until I said ok. Then the lady gave it to me for free. I wasn't feeling right when not charged (because I wanted too little, my fault), and insisted on paying. They said, it's their treat for me because they know I only want to taste it. In the end, I accepted it. So nice of them.

I went back another day (after spending a night on Beach of Intimate Love, nothing raunchy about the beach) and bought a lot more akok.. and regretted not buying even more when I got home to Perak. Everybody liked the akoks a lot, but I didn't have any tahi itik to spare cos I ate them all up. 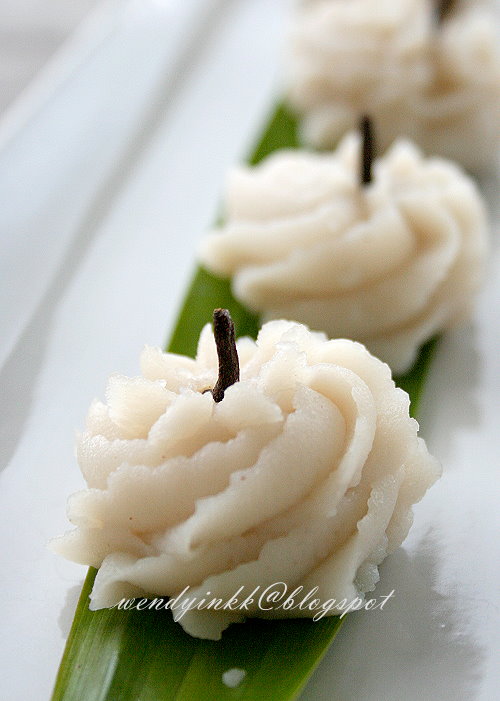 Here is a recipe that I tried to copycat Nik Yam's  version of Tahi Itik. Her version is not very chewy, soft and custardy, but yet has a soft bounce to it. I tried to make it 3 times and finally got something similar.. I didn't make it as sweet as hers though, and also not as good as hers.

The first attempt's softer because I didn't add in glutinous rice flour and it could be piped, but it didn't have that bounciness
The second was discarded and the third, I'm quite satisfied, but it is not pipable, so I just rolled it like how it's usually done in Kelantan, and stuck a clove in to decorate. It's also easier to photograph when it's not all white.
Because the amount I made was very little (compared to the kuih sellers), it got too thick before it even cooked, so thick that I can't even stir it. So, I cooked it further in the microwave. 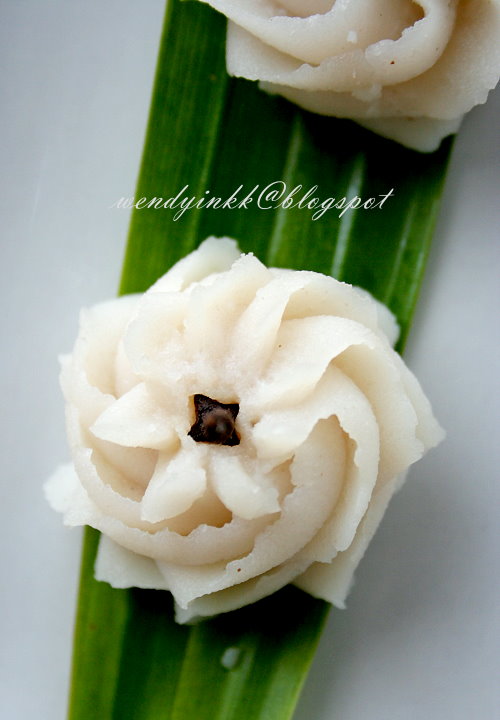 1. Combine everything, stir with a whisk until smooth.
2. Cook on medium low heat until it turns very thick.
3. Transfer everything to a microwavable bowl and zap it on high with 30 second intervals. Stop zapping when it looks lumpy
4. Let it cool down to a manageable temperature (still very warm). Discard pandan shreds and roll them into golf sized balls. 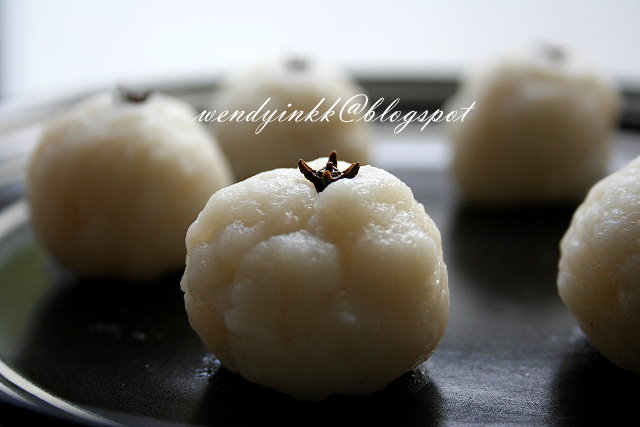