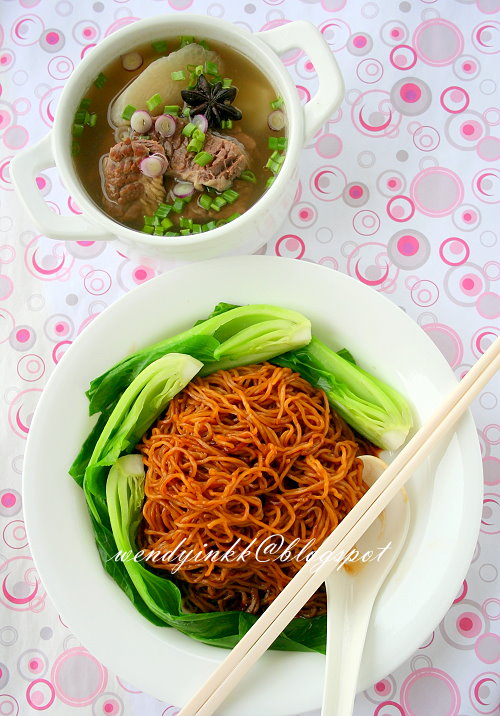 Onn Kee Beef noodles..... It has been around town for 3 generations, minimum.Probably more than 80 years as the 3rd generation are my school mates.

In those days.. way before the 90's... Onn Kee was situated infront of Gospel Hall, at the foothills of Golden Dragon Garden. The stall operates from late afternoon up to past midnight catering to all those supper folks.
Each time one passes by that junction, the smell of the beef brisket just permeates the air. Intoxicating.. in a good way.

And I heard, some purposely ask for the leftovers from yesterday, as those taste even better! 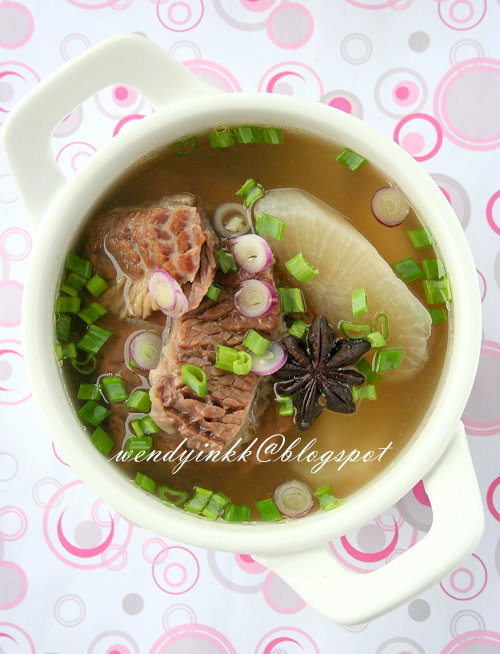 In 1993, Kampar Municipal ordered all hawkers to move to a hawker center next Kranji river, near Wah Loong Village. Onn Kee was part of the move. They are now stall no.19 at the place that we call nickname, "36 stalls".

Of late..due to family issues... Onn Kee no longer make their own noodles. Something that I really really miss because their noodles are absolutely delicious. It's nothing like those factory made noodles, nor is it like the noodles from other homemade wantan noodle stalls in town. The texture is just so so much better. Sadly.... the 3rd generation decided to let go.

I know there are many places that sells beef brisket, and most do have their own style and variations. Onn Kee serves theirs with their homemade noodles that most will usually relate the noodles as egg noodles or fresh wantan noodles. Yes, they do sell wantan too and wantan mee in Kampar doesn't come with Char Siu unless you ask for it. It's specific. 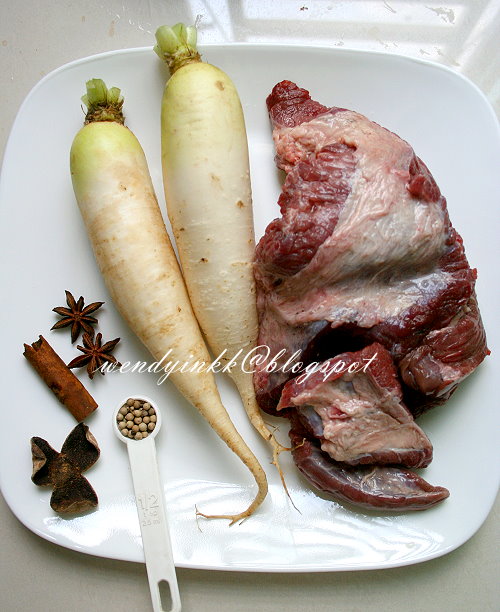 This method of cooking beef brisket is actually a Cantonese method, and my family also cooks this soup at home, but with some differences. So, it's not too hard for me to guess.

Now, I didn't peep into their kitchen to make out this recipe, but all was from observation. Of all the years I ate there, I saw things in the soup. Not eerie things but the spices they use. So, that's how I made up this recipe. If one were to observe how they prepare the noodles right at their stall, you will also know how to get the noodles right. No shallot oil, or garlic..but just plain ole Char Siu renderings. It gives a different aroma than plain lard. That's why when they narrowed their menu and removed the shredded chicken with mushroom gravy, they never removed char siu from their list. They need the renderings. 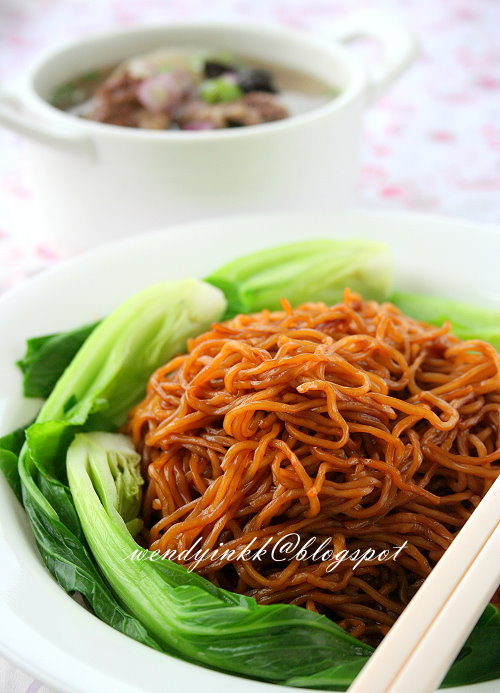 600gm beef brisket/flank cut (牛腩), plus some beef spinal cord (yummy!!) and tendons
300gm daikon (choose the long slender type, fat ones lack in flavour), peel and cut into slanting chunks
2 star anise
2 inches cinnamon stick
1 small piece of dried tangerine peel
10 pcs of white peppercorn, cracked
20gm rock sugar (it depends on the daikon whether they are sweet or not)
1/4 tsp MSG (optional, but if you're eager to be as close as possible to the real thing)
Salt to taste
Spring onion for sprinkling (I find this crucial for the final taste)

1. Bring 2.5L water to boil.
2. Put whole piece of brisket, and daikon chunks, and all the spices into the boiling water.
3. Add salt and seasonings after 3 hours and let it simmer for another hour or two (or until it is tender)
4. Fish out the brisket chunk and let it cool down. Slice it and put it back into the pot.
5. Serve the beef brisket soup with a sprinkling of spring onions. 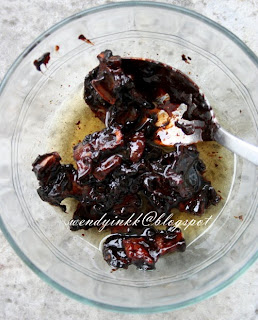 Loosen single portion fresh egg noodles/fresh wantan noodles. Put the noodles in a noodle strainer. Cook in boiling water for 15 seconds. Rinse it under running tap water. Blanch it again for another 15-30 seconds depending on the thickness of noodles. Put noodles in a plate. Top with 1 Tbsp of renderings, some dark caramel sauce (or dark soy sauce), light soy sauce according to taste. Toss the noodles. Garnish with some blanched baby bok choy or mustard green.

Slice the fat pork belly thinly. Put in into the wok with 1 Tbsp of oil and slowly fry until it is very slightly golden. Add in sugar and light soy sauce and cook the belly until it turns dry and dark. Discard the belly bits and retain the renderings. 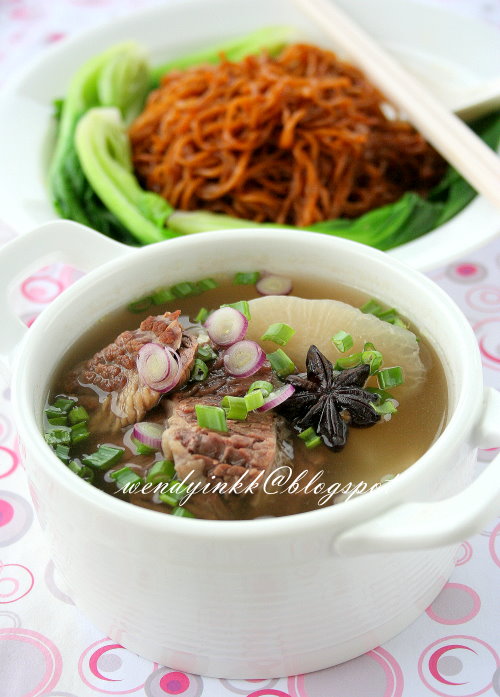