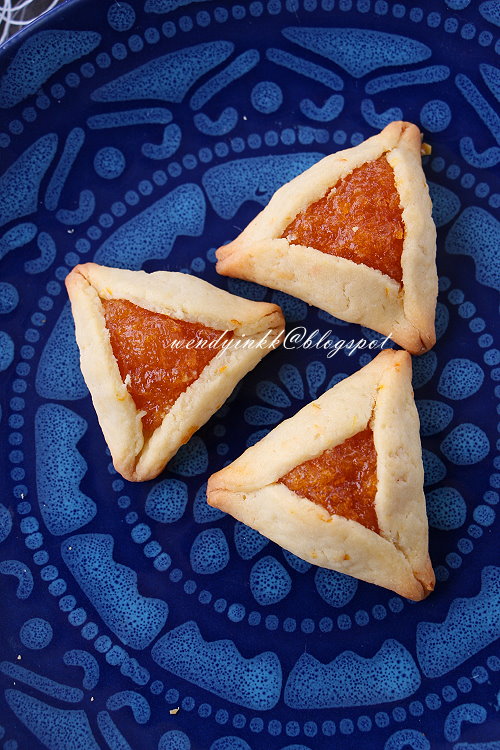 Hamantaschen means Haman's hat,  a traditional Jewish cookie that is eaten during Purim festival  to remember the defeat of their enemy named Haman. Read  story here.Haman wore a triangular hat, and so.. that was the reason for the shape of the cookie. In Israel, they are known as Oznei Haman, as in Haman's Ears. 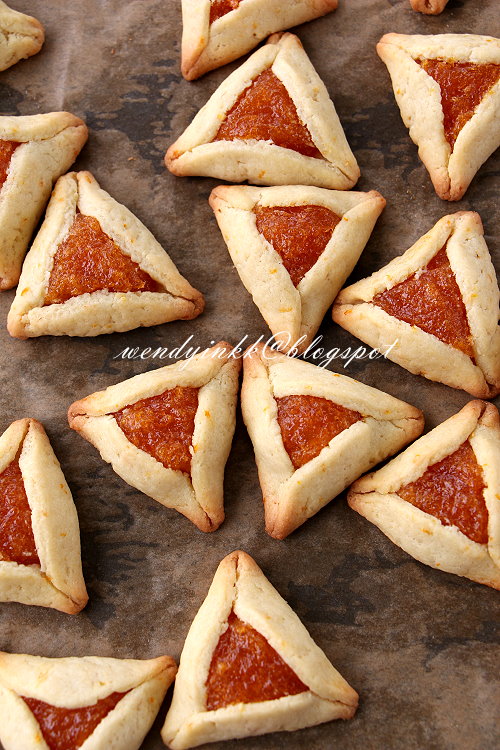 There are many variations of the dough on the internet. Some are crispy, some cakey, some  yeasty,some made with oil, some butter. Traditional fillings are like poppy seed, prune and apricot. More modern varieties like chocolate and strawberry jam are also found  nowadays. I decided to go with apricot  as I like the colour.


I altered a bit of the  recipe, because I am not very confident of moulding it in our weather to stay as a triangle in my hands, later they turn into balls, hahaha! I think I overworked the dough. It was a little bit too crunchy, as this ratio is something I have made before, but it wasn't like this.

My dried apricots weren't too fragrant, and so the apricot butter wasn't as splendid as I wished.  But it's a good alternative for a low sucrose filling. 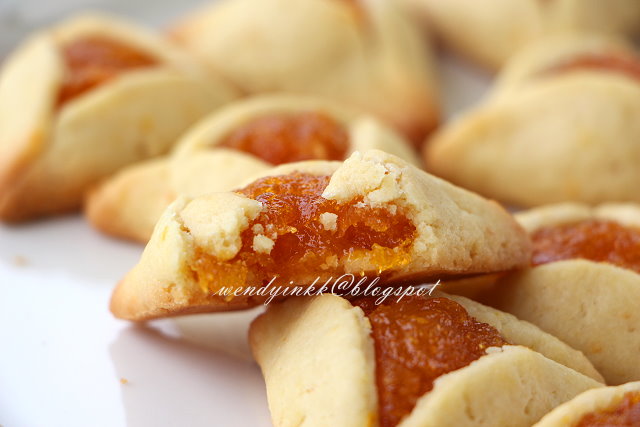 Hamantaschen
Adapted from: Shiksa in the Kitchen

Prepare filling
1. Cut apricots into small pieces.
2. Combine with all the ingredients and bring  to a boil. Lower to a simmer (lid on) until the apricots are soft and liquid is left to around 1-2 Tbsp on the base of the pot.
3. Puree or mash the apricots.
4. Keep in fridge, covered until time of use.

Prepare dough.
5. Cream butter and sugar until pale and fluffy. Add in egg and beat until smooth. Add in vanilla and orange zest and beat for a  while. Add in flour and mix until combined.
6. Wrap dough in cling wrap and keep chilled for 1hour at least. Or you can chill it overnight.

Shaping and Baking
7. Take the dough out from fridge. Unwrap dough, divide dough into 3 portions. Roll each portion into 3-4mm thick, cut with a 2.5 inch round cutter.
8. Put some  filling in the center and fold the 3 sides in, one  corner overlapping the other.(see pic)
9. Bake in a preheated oven at 180C for 17 minutes or until the corners start to turn golden.

*Filling amount was left with 1tsp when dough was used up.

I used a cut up soft drink can to cut the dough, because it was the size that I want. See here  on how to cut the can 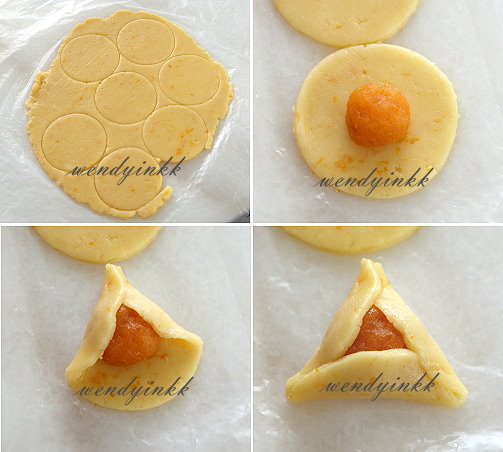 I am submitting this to Asian Food Fest West Asia Month,
hosted by Shannon of Just as Delish