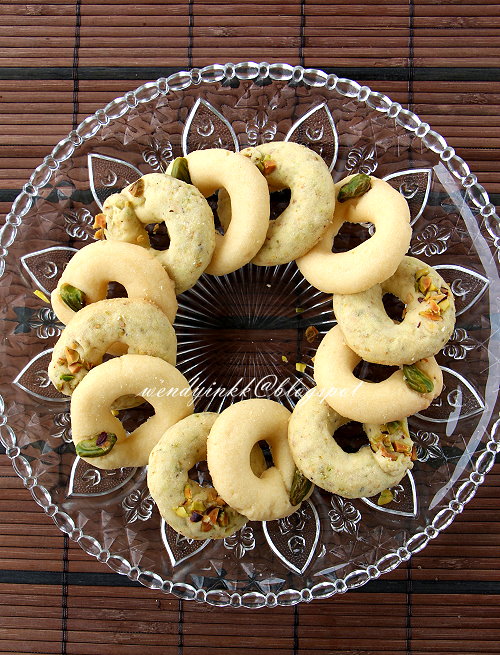 First I tried the one that I think is more traditional, with ghee and rosewater. I wasn't too happy with it and I tried another version that is more  modern I think, as it uses butter, vanilla and has cornstarch in it. 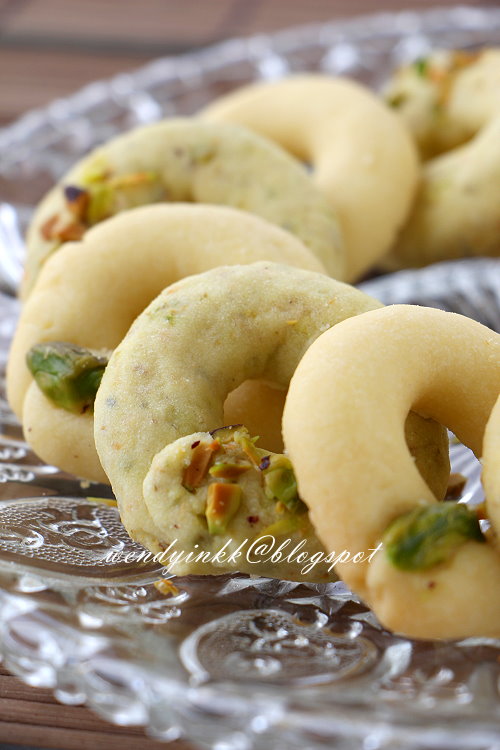 Which version did I prefer? The 2nd version :p
My girls love the first version instead. So, there's someone to eat everything.. hahaha

Take note that smaller cookies will bake faster, so, adjust timing according to the size of your cookies, as long as they don't turn golden too much. 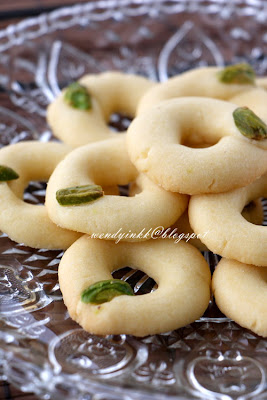 1. Put ghee in mixing bowl and put into the freezer.
2. Cut pistachio into half, some tend to break. Final amount, you need 24 pieces of pistachio halves.
3. Measure and weigh the other ingredients.
4. Remove  ghee from freezer and cream it together with icing  sugar until pale and fluffy.
5. Put in rosewater and beat until  combined.
6. Put in flour and mix until combined.
7. Preheat oven at  170C.
8. Divide the dough into 15gm pieces. Roll and form into a ring. Place a pistachio half on the connecting ends.
9. Bake for 15  minutes, do not let the cookies turn golden. 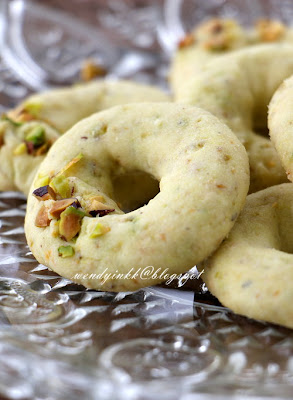 1. Combine flour, cornstarch and chopped pistachios together and mix.
2. Cream butter together with icing  sugar until pale and fluffy.
3. Put in vanilla extract and beat until  combined.
4. Put in flour mixture and mix until combined.
5. Preheat oven at  170C.
6. Divide the dough into 15gm pieces. Roll and form into a ring. Place some chopped  pistachio on the connecting ends.
7. Bake for 15  minutes, do not let the cookies turn golden.

I am submitting this to Asian Food Fest West Asia Month,
hosted by Shannon of Just as Delish
Posted by WendyinKK at 11:00 AM