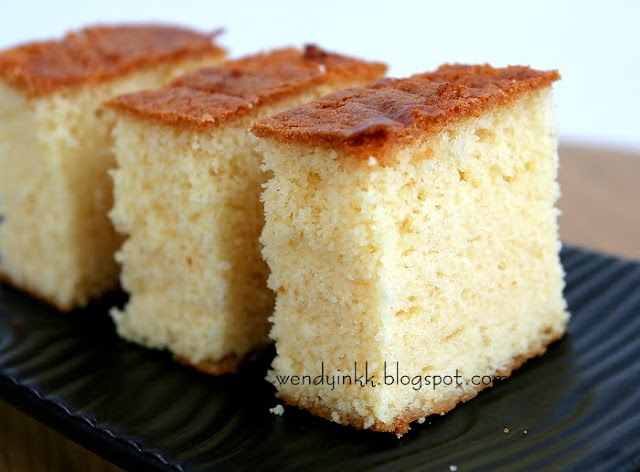 How to say how difficult... hmmm. Ever tried making a sponge that won't deflate no matter how u beat in the flour??? Yes, beat. I didn't fold.

Many many months back, when I was still learning to make sponge cakes, I beat in the flour with my mixer. The result was a denser sponge, but it was still crumbly, just that I had a very short sponge. Maybe I should do that in order to achieve that flat fine crumb.

From what u see in this video, the batter was not handled lightly... u need muscles and bicep power all the way to the end. Beat Beat Beat!!!!! Do the MJ thing, beat it. 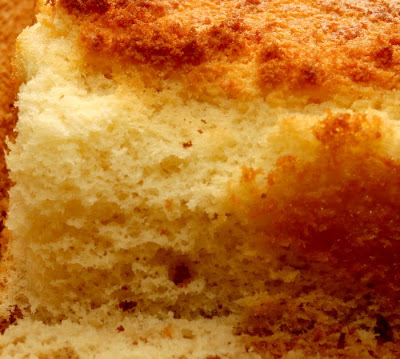 Ok, going back to the issue of it not deflating. Am I crazy??? Why do I want my batter to deflate??? Because, I'm getting so much volume and by experience I know, this cake will be so big and fluffy. Fluffy is not a good thing for castella. I want mine to look like the one on Ju's blog.No fluffiness is welcomed. (see pic on left, it's so fluffy!!!!)The original recipe called for 8 eggs, and it's supposed to fit into a 8 inch square pan, plus some cupcakes. Here, I've halved the recipe, but from the looks of my batter, mine can fit a 8 inch pan!!! U see how fluffy mine is?? Darn!!! And it won't deflate. So, I continue to beat and beat with my whisk so that it'll go down a bit, it did, a bit. So, now I put it into my 6.75 inch square pan. It's 80% full. I banged it few times, hoping it will deflate more. I thought the cake won't rise that much cos I didn't use any leavening. Boy was I wrong!!! So wrong!!!  I saw here that Ju used aluminium foil to tent her cake so that the top won't burn (stuff with honey browns much quicker, and my oven is not merciful when it comes to browning cake tops), so I tented it for the first 40 minute and left it uncovered for the last 15 minutes to brown. U know what??? Since my pan was so full, the cake rose and got stuck to the foil. When I tried to remove it, I did the cruelest thing ever to a cake, mar it's face. It looks so disfigured. I just went on to brown it.. and whew it looked just nice. I happily took it out. Quickly peeled off the side wrappers so that the cake will deflate(a little bit only). Sides look cooked, and very fluffy, but the centre felt wobbly. I stuck a tooth pick in, oh-no... uncooked. I put the whole cake back into my oven onto the microwave plate, hit "combination 4" to have it cooked throught using microwave+convection functions. I did it for 3 minutes and finally, all done!!! Cooked thoroughly!!! 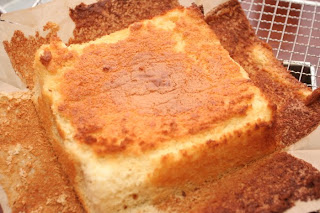 The final look of the cake. I peeled off the sides earlier before microwaving cos I was eager to taste it, and that was the only part cooked earlier on. I think w/o tenting it, it would've cooked by the end of the baking.

100gm bread flour (yes, bread flour. But I think I'll change to pau flour(not Hong Kong Flour) next time. Pau flour has the gluten level of all purpose, but it has a finer texture)
50ml milk
2 Tbsp honey, some extra for glazing the top, if u wish to.

3. Preheat oven at 150C. Line a 7 inch pan with 1 single piece of paper, folded at corners, with sides made higher
4. Beat eggs and sugar over hot water on high speed for the first 3 minutes and lowest speed for the next 12. (if u're using a stand mixer, u might not do it as long as I did. )
5. Use a hand whisk, whisk in the honey mixture until well combined.
6. Whisk in sifted flour until no lumps of flour are seen.
7. Pour batter into prepared pan and bake for 40mins. (Yes, even with a half portion, u have to bake at almost full time. I got to know this thru Shirley)
8. When cake is done, remove from pan and tear away the side liners. Cool cake thoroughly and keep cake air tight in a tupperware overnight, before cutting, so that cake will be moist.

U know what this cake taste like???? It's like... Ji Dan Gao (鸡蛋糕). Except, it has a slight honey flavour and more bounce due to the bread flour. Quite nice actually. I will attempt this cake again, with pau flour and beating with the mixer all the way. 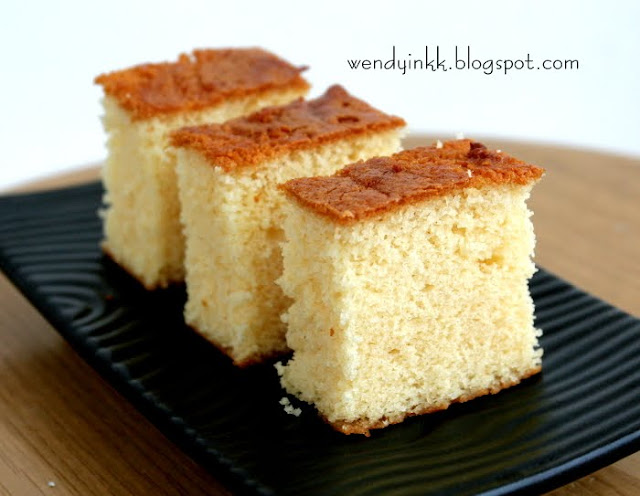 Email ThisBlogThis!Share to TwitterShare to FacebookShare to Pinterest
Labels: Cakes, cakes-chiffonsponge, From the net, Honey