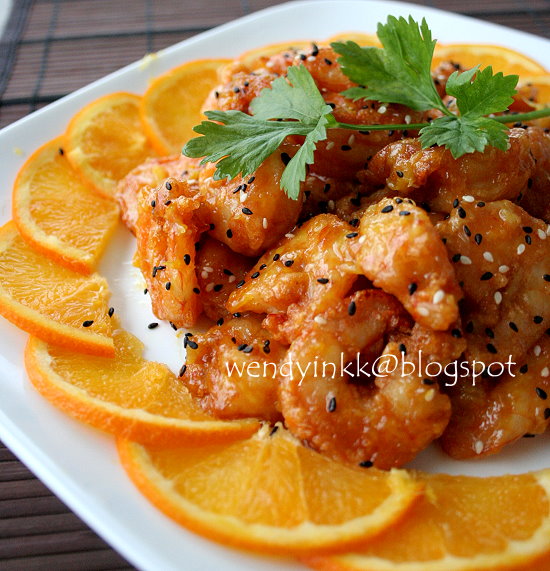 For this year's Chinese New Year, my FIL went all the way to the coastal areas to get seafood.
He bought few large fishes, 2 kg of prawns, crabmeat and lots of other stuff. We took one kg of the prawns and used it to prepare a dish for the reunion dinner. We found that the prawns to be.... not very fresh.

So, later on, in order to clean up the balance of prawns, I decided to cook them up without shells. This way, it could be easily finished up. 1 kg of pure prawn meat, it's just like eating popcorn. And you know what, this pack of prawns tasted fresh instead!!!! LOL.

We had a good laugh about it. 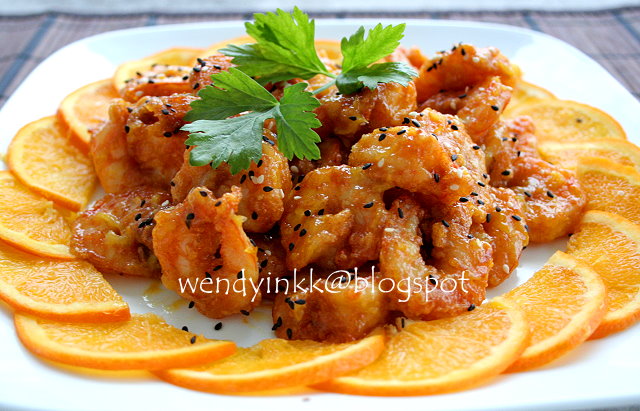 I saw this recipe on Martha Stewart's even before CNY, but I sort of forgot about it after bookmarking.
I've made orange chicken before(when I was a teen) but never eaten orange prawns before, but when I go through the recipe, I find the gravy lacking in flavour dimensions.  So I took the idea but did it my way to suit my preference.

The title's shrimp, but I refered to them in this post as prawns. Here, shrimp is mostly used for small prawns, and prawns are big shrimps, LOL, get the idea? I just used the same title as seen in Martha's recipe. 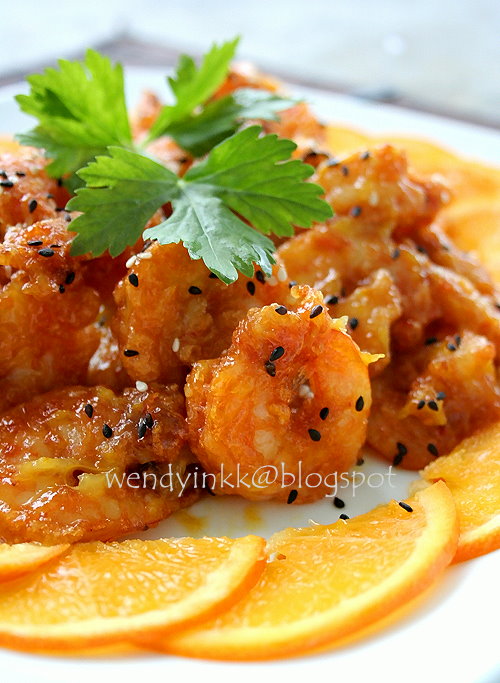 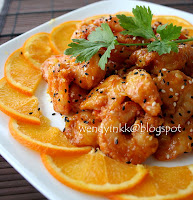 1. Peel prawns, devein, drip/pat dry and marinate with salt, pepper, egg white and potato starch. Leave for 15 minutes.
2. Deep fry prawns in small batches using the 1-2 cups of oil. Drain and set aside.
3. Combine orange juice, lemon juice, sugar and salt. Separately combine cornstarch and water.
4. Put Tbsp of oil in wok/pan on medium low heat, and cook ginger and orange zest until fragrant.
5. Pour in the juice mixture and bring to a boil. Thicken to preferred consistency with cornstarch mixture.
6. Return prawns to wok/pan and give it a quick toss to coat.
7. Sprinkle toasted sesame seeds and dish up.

*to toast small batches of sesame seeds, just cook them on medium low heat on a dry pan until they look puffed.

Email ThisBlogThis!Share to TwitterShare to FacebookShare to Pinterest
Labels: From the net, Fruits-Citrus, Seafood, seafood-prawns