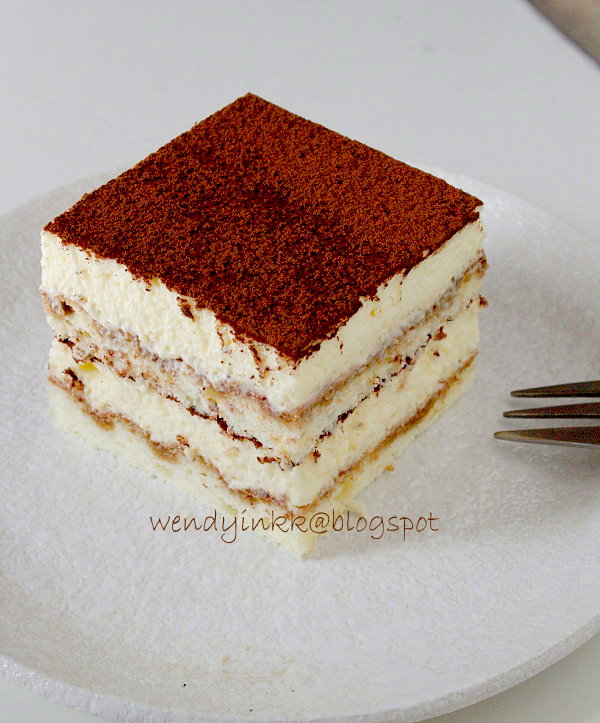 It’s so funny that all the blogging years, I’ve never never attempted a Tiramisu. Nor did I ever felt tempted to try it out. When some people I talk to know that I bake, they ask me, ever made tiramisu? I’d be dumbfounded and said no, not yet. It seems that is the first cake they ever ask me. Is that a pre requisite for someone who bakes? Must every baker make 1 tiramisu once in their life? Well, maybe a lot of people love tiramisu, but I was just so so about it. Most tiramisus I had are very bland, taste more like a coffee cream cake more than anything else. Maybe mascarpone is too bland for me, or those bakeries just didn’t use as much mascarpone to bring the flavour out? It just doesn’t appeal to me so so much that I got to add it in my baking list. Frankly, it is not. 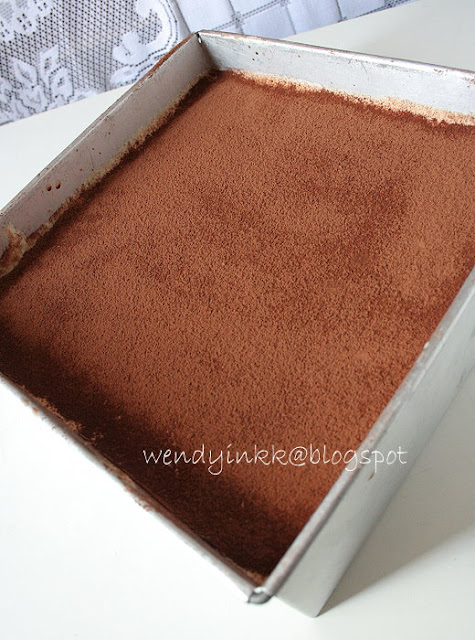 But then I got 3 pasteurized eggs left over from my mayonnaise attempt. I was chatting with Swee San about my pasteurized eggs and told her I made mayo. They are very pricey at RM5.99 for 6 eggs. Then she asked me to think of things to make with my balance of eggs. It’ll be a waste to cook them and eat. I should make something with raw eggs. At that moment, I didn’t have anything in mind, but then I thought, hmm..maybe spaghetti carbonara again. But in my heart, I also felt, why make something I’ve never made before. So then I asked Swee San to suggest to me instead since she’s the cake pro. The next day, she left an offline message to me, suggesting Tiramisu. I looked at the message, and thought, oh yeah. Maybe I should make this I’m “not so excited about” cake. And if I use uncooked eggs with it, maybe it’ll change my mind. And it’s also a good chance for me to use more of my Nescafe Gold and with a coffee theme planned, I really should try this. Just for the sake of trying. I refered to Swee San’s recipe in her blog, and developed my own filling recipe from there. Using hers as a guideline. 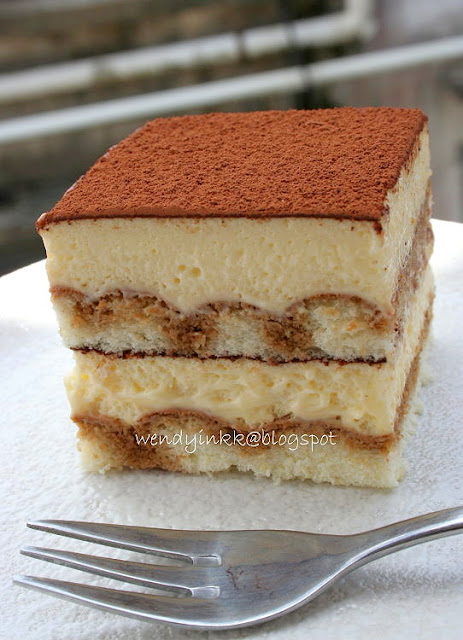 The day I went into my kitchen to weigh my stuff for the sponge, I saw… No Cornstarch!!!! Gosh!! How could I ever run out of it??? So, I looked at the recipe again, okok, I’ll just use all purpose for it.
And when I sifted the last layer of cocoa powder over the cake, I remembered, I forgot the BOOOOOZE!!!! How could I???

During my MIL’s last trip back here from the US, she called me after arrival asking do I have any liquor to buy at the duty free shop. I asked her to get me a bottle of Kahlua since I do see many bakes using that. Thinking that this will be a good debut for that new bottle of booze, I was estatic about it. But in the end, it was left out, still in the cabinet, waiting for me uncork it. Stupid, idiot!!! But then, haha, it’s more child friendly now. I did not intend to put in a lot anyway, just maybe 2 Tbsp, but even so, I totally forgot about it until I was at a stage of no return. If only I remembered before I sifted cocoa powder over it, I could still mix in some liquor on the last layer of cream, but then….. it was after sifting, and I could do nothing about it. 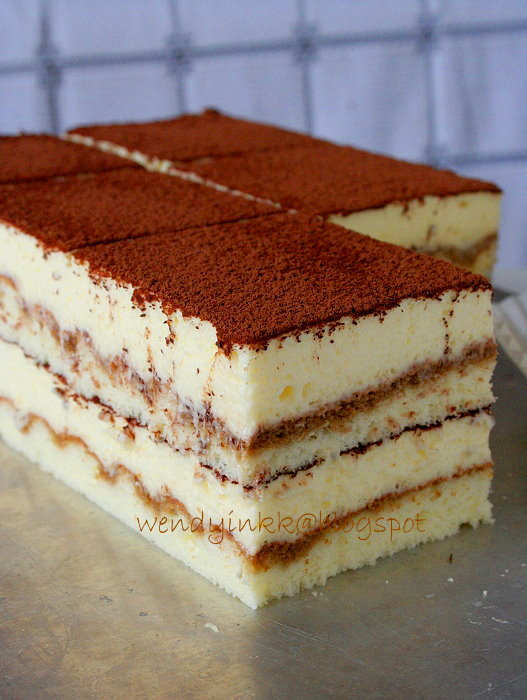 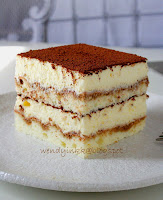 1. Prepare 2 pans (10X10 inch). Line with paper.
2. Preheat oven to 200(fan)/220C
3. Beat egg yolks with 50gm sugar until thick and pale. Set aside.
4. Wash beaters and beat egg whites until frothy. Add in cream of tartar and beat until soft peaks. Add in sugar gradually and beat until medium stiff peaks.
5. Pour beaten egg yolk into whites and sift half the flour over both type of eggs. Fold.
6. Sift remaining flour over batter and fold.
7. Put batter into piping bag with a 1cm round tip. Pipe lines of batter onto both pans.
8. Bake for 6-8 minutes.
9. Leave cake to cool totally before use.

Combine both and set aside to cool down. It’ll taste pretty bitter. Mix with liquor.

1. Place water into a heatproof bowl and sprinkle gelatin over. Let it sit for a while so that the gelatin granules will bloom. Heat bowl over hot pan of water or in the microwave to melt the gelatin. Refer to this post. Set aside to cool. Freeze a mixing bowl at this point for the cream
2. Beat egg whites in a clean bowl on high (hand mixer) for 1 minute. Put in cream of tartar and beat for another 4-5 minutes. It should have taken on form. Put in 80gm sugar gradually and beat for another 3 minutes. It should form peaks when beaters are lifted. Put in fridge while you do the next step. Take note that pasteurized egg whites needs more acid and more time to beat it up, and it yields lesser than regular egg whites.
3. Rinse the beaters and remove bowl from freezer. With that bowl, beat whipping cream until soft peaks. Transfer cream to a bowl and set aside in fridge.
4. With the same bowl, beat cream cheese until smooth, it’ll take only a minute. Put in 50gm sugar and beat for 1 minute. Put in egg yolks gradually and beat until smooth.
5. Fold the whipped cream into cheese mixture.
6. With your melted cooled gelatin in your left hand (if you’re right handed) and your hand mixer on your right, run the mixer on speed 1 or 2 (if 1 is too slow for ur machine). Drizzle in the gelatin as the mixer is on. Make sure the mixer mixes the gelatin evenly.
7. Pour cheese mixture into egg whites and fold. Use immediately to fill cake.

1. Prepare a 9 inch loose bottomed pan, or if you don’t have one, fully line a 9 inch square pan with lots of overhanging paper.
2. Trim 1 layer of cake and place it into pan, it should fit snugly, try to remember the direction the grooves are facing. Or just clip something on the pan to mark the direction.
3. Brush half the coffee solution over the cake.
4. Pour half the filling over the cake. Level surface by smoothing with a spatula and shaking it left and right gently. Sift cocoa powder over the filling with a small sieve.
5. Trim another layer of cake. Place it exactly in the same direction the previous layer was put.
6. Brush the remaining coffee over.
7. Top with balance of filling, level it and sift another layer of cocoa powder over it.
8. Chill for at least 5 hours before serving. Best is overnight.

Verdict:
Yummmm………. The raw eggs tasted so good. Fluffy raw egg whites added a beautiful dimension to the filling. Very light and soft. The gelatin amount is just enough to hold everything from weeping, but not so much that it firms it up. The cheese flavour is more prominent, err… cos I used cream cheese instead. Coffee flavour distinct and just nice, the cake’s not soggy not wet, but moist. The grooves on the sponge are bit shallow, but then I do hope the next time around I don’t run out of cornstarch and I can try the recipe as per Swee San’s.

Overall, I’d say, I did quite a good job here : p , but then taste is a personal matter. I do find my version better than those I ate out there, but then I won’t say all the versions out there. I have never ever eaten all the tiramisus out there, just comparing to those that I ate before. I won’t mind making another one..but I’ll make sure I won’t forget the booze.

﻿
﻿
And I did make a 2nd one weeks later and I also forgot about the cornstarch and almost the booze too! I only added in the booze on the 2nd layer of brushing, LOL. I am getting old, admit it.

Email ThisBlogThis!Share to TwitterShare to FacebookShare to Pinterest
Labels: Cakes, cakes-cheesecake, Coffee, Eggs-Pasteurized, From the net