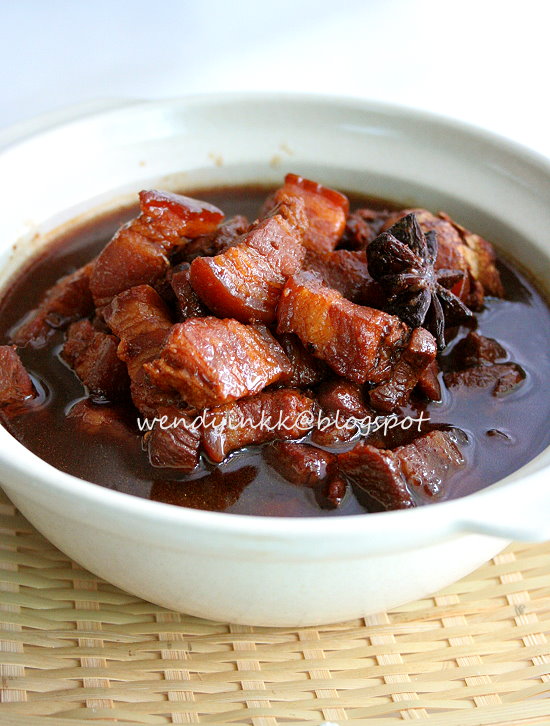 This is a popular home cooked dish. After blogging I got to know that Hokkiens call this Tau Yew Bak, but my family being Cantonese, calls this Lou Chu Yoke 卤猪肉. As in Pork Stew.
My mom cooks this so often that I almost got sick of it when I was in my teens. Being her, using just one pot and being able to cook this in advance makes this one of her favs. So often that we eat this almost weekly.
Sometimes she'll throw in some dried chilli, sometimes none. But basically she goes with the same few ingredients. My mom will saute the aromatics in the clay pot and then throw in the pork and seasonings, cook it for a while and then pour in the water to simmer. I on the other hand, prefers to cook the pork with seasonings until the meat is browned and oil starts to ooze out. Then only I put in the water. I don't own a clay pot, so I just cook this either in the wok or in a small pot. 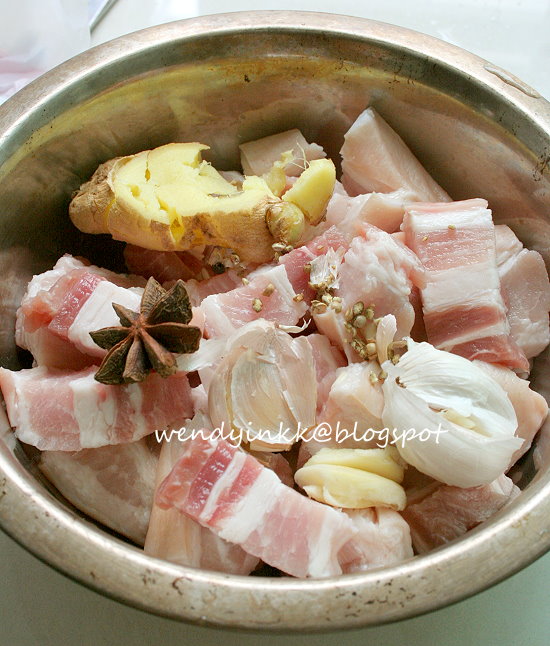 If you are lazy to cook more dishes but want variety, throw in some deep fried tofu and hard boiled eggs and fish them out before serving on a separate plate, and you'll have 3 dishes from that one pot, LOL. Talk about being convenient, mom, I'm learning from you.

My mom's version is sweeter and more robust, compared to some other versions, cooked by other people that I've eaten before. I'm just describing her version, and not saying hers is better than yours. Each family will have their own versions. 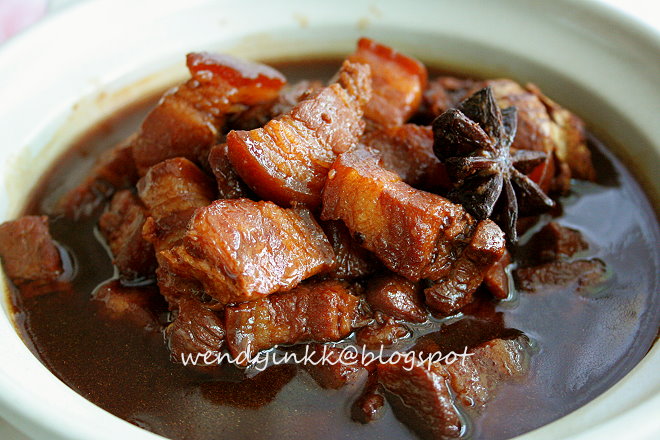 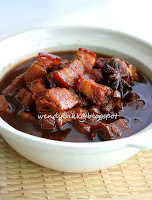 
1. In a small pot, put in 1-2 Tbsp of oil. Saute ginger, garlic, peppercorns and star anise until fragrant and garlic looks slightly golden.
2. Put in pork belly and fry until meat looks opaque.
3. Put in seasonings and cook until the neat dries up and you can see more oil in the pot. It will smell awesome at this point.
4. Put in water, enough to cover the pork. Bring to a boil and lower to a simmer for 1 hour, or until meat is tender.
5. Thicken gravy with cornstarch mixture until preferred consistency.