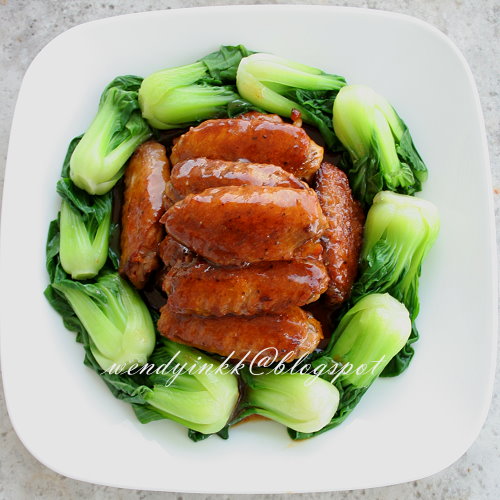 A lot of people asked me, how did I know so many things about cooking at a young age (back then in my early teens). It was through reading the only cookbook that my mom has, the Wei Chuan cookbook. This book provided basic Chinese cuisine knowledge explaining all the cooking terms and the name of the ingredients in English. I can't read much Chinese so, this book was good for me.

As a kid, I loved flipping through the pages and during that time, my favourite part of the chicken is the wing, the middle wing to be exact. Because it has lots of skin and the texture is soft and nice. The picture of this dish is one of my favorites from the book. Glimmering wings.... beautiful. Took me almost 28 years to finally cook it. 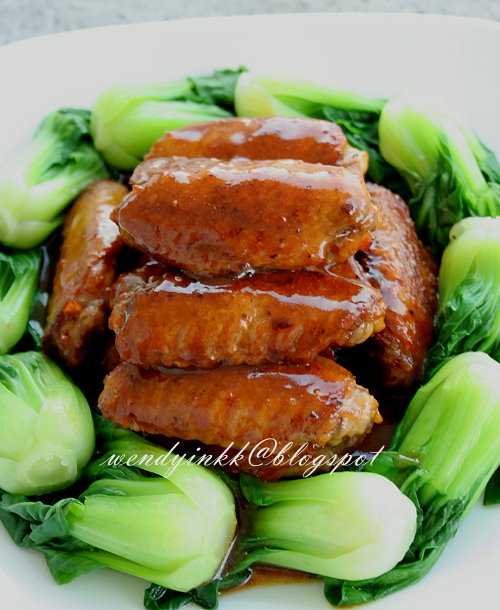 When I cooked this dish more than a year back, I made a huge mistake. Just before cooking, while I was preparing the gravy, only did I realize, the amount of seasoning was quite a lot. I looked carefully at the picture again, counted the middle wings that I could see, then it hit me that the drummets were actually hiding under the pile of middle wings. I had interpreted the recipe wrongly. I used too little chicken! As this book has always been quite accurate, I was deceived by the picture seeing only the middle wing. I have cut off the drummets to make ayam pentul and used the middle wing for this.

Gosh! I felt so stupid.

So, in the end I reduced the seasoning by half. Still feeling stupid, ahaha!

Now... after being enchanted by its looks in the book for 28 years..... how was the verdict.
Not very special only la! But easy enough for new cooks and looks good for entertaining. 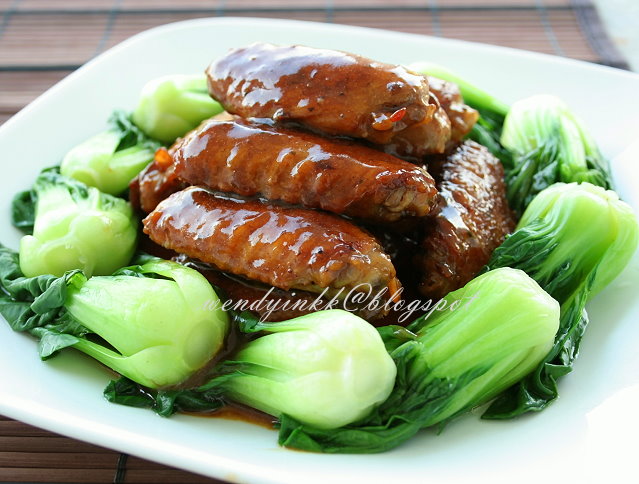 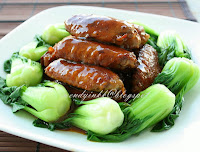 1. Marinade chicken wings with light soy sauce for 15 minutes. Deep fry the wings until lightly golden. Dish up and drain.
2. Heat wok and put in 1 Tbsp of oil and put in spring onions and ginger. Stir fry until fragrant. Pour in the prepared gravy and bring back to a boil. Put in chicken wings and let it braise until almost dry. Thicken the gravy with the corn starch mixture (may not need all).
3. Dish up and serve with blanched vegetable as garnish. 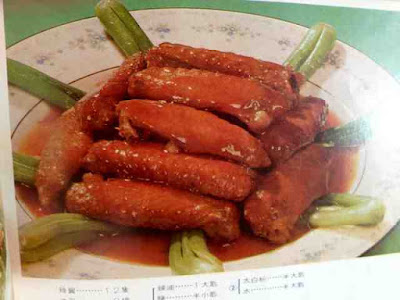 The picture I ogled when I was a kid and got deceived :)

Email ThisBlogThis!Share to TwitterShare to FacebookShare to Pinterest
Labels: Chicken, chicken-stewsbraisedstirfry, From books