Satay is skewered thin pieces of meat that is grilled. Commonly found in South East Asia and usually made with either chicken or beef, but non Muslims have the pork version as well. You can also find pork satay in Bali. The Hainanese migrants that arrived on Penang's shores have made a version to call their own.

Hainanese Pork Satay is found in a few places in Malaysia, and Singapore as well. But Penang's version is something different.
I came to know of this dish via surfing the internet. I have never eaten this before. 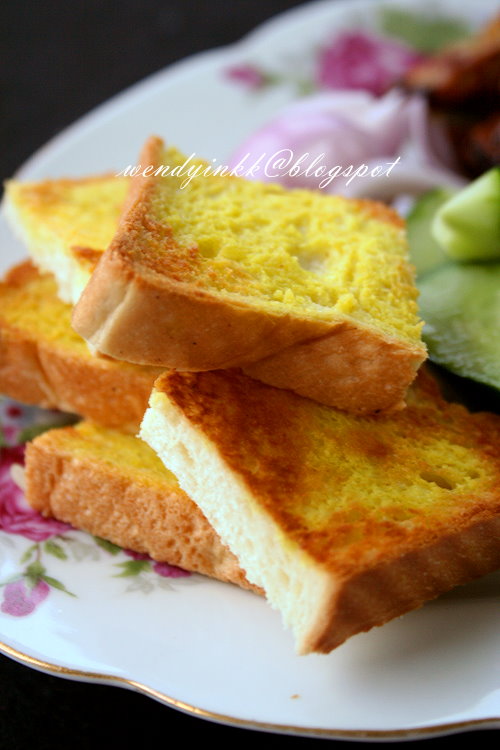 Penang Hainanese Pork Satay is marinated heavily with turmeric and coriander powder. Other versions (no matter what kind of meat) in Malaysia generally do no use coriander, and is basted with coconut milk for grilling instead of ghee or oil.

The satay sticks are served with a special sauce, made with sweet potatoes and not the usual peanut sauce.
Toast is served alongside instead of the ketupat (rice in coconut leaf parcels).

It is no longer a common fare. In Penang, there is only 2 stalls left selling these. Read about it here
In Singapore, the Hainanese satays are served in peanut sauce together with grated pineapple, and in Seremban, it is served with the regular peanut sauce, but pig intestines are available as well. The yellowish toast is non existent in both places.

The recipe given to me through Alan from the book sounded a bit funny for the toast. It says, brush the basting sauce on the bread and it'll turn yellow, but there's no turmeric in the sauce. I wonder how can it turn yellow. So, in the end, after brushing the bread with basting sauce, I brushed on some of the turmeric stained renderings in the pan to make the toast yellow, and they turn out really crispy, LOL.

I didn't use separate pieces of lean pork and pork fat, instead I used the belly of which has natural layers of meat and fat. Hawkers usually won't use this cut because of the price factor, but for us homemakers, it's the more convenient way especially if we don't make a lot.

I forgot to soak my skewers in advance, but just for 10 minutes, hence they darkened in the oven.

My husband commented the satay tasted a bit on the dry side, probably due to the long grilling time, but the fat layers had some crispy bits to it. You might want to use a higher temperature to shorten the cooking time, or do it over open flame. Shorter cooking time might not cause the fatty bits to render that well. If you have a grill pan, you can use that too, but nothing eats the smell of the coconut milk grilling over open flame. Pros and cons.. 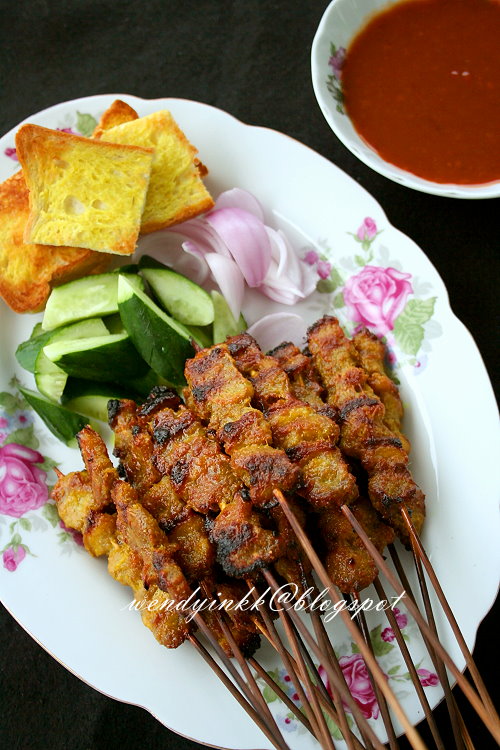 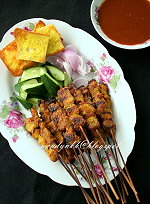 Other ingredients
Bread, cucumber and onion wedges
20-25 pcs of bamboo skewers (soaked for a few hours)

1. Cut the belly into 1 inch strips. Cut each strip into 5mm thick slices.
2. Marinate meat. Grind the lemongrass, garlic and galangal (u can mix with everything to bulk up and grind). Mix everything together and marinate for few hours or overnight. 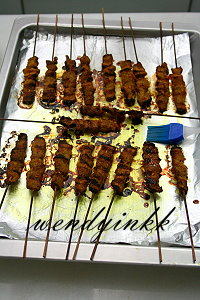 3. Prepare sauce. Strain the tamarind juice and combine everything except salt and sugar. Bring to a boil, lower to simmer for 30 minutes. When the sweet potatoes have cooked, blend everything together (I used immersion blender and didn't wait to cool down, jug blender needs the ingredients to be cooled down). Season with salt and sugar. And reduce to preferred consistency of sauce.
4. Prepare basting sauce. Combine everything together. Give the lemongrass more bashing in the liquid
5. To cook. Put onto skewer 3 to 4 slices of marinated belly. Brush them with the basting sauce.
6. Line a baking pan with foil. Arrange the skewers onto pan. Grill in oven 230C for 10 minutes for each side, 20 mins in total or until the meat starts to look very caramelized.
7. Brush the bread with some basting sauce, then brush on some of the yellow melted fat in the satay pan. Grill in oven for 3 minutes, same temperature, or until golden.
8. Serve with cucumber and onion wedges 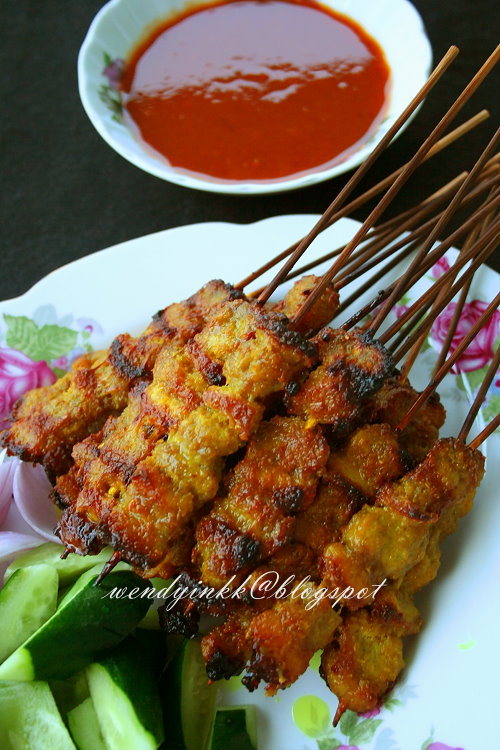 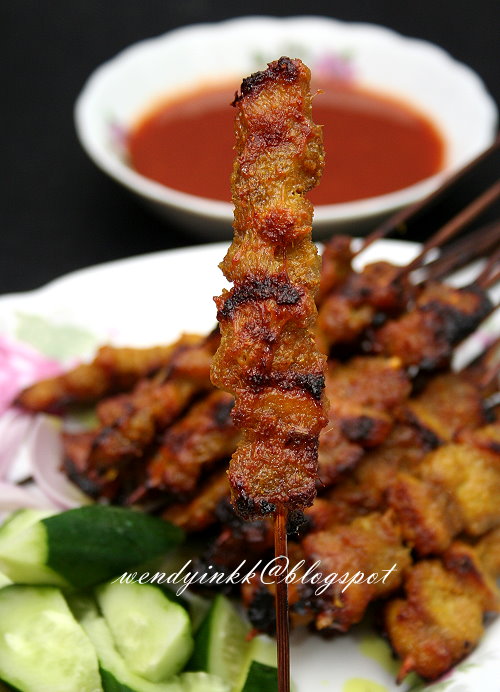