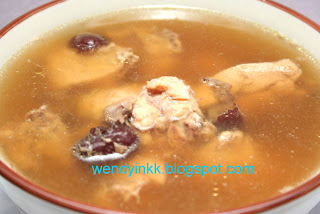 I have a grandaunt who lived til she was 96. She was the eldest sister of my paternal grandmother. My father and I were babysat by her, so were my father's siblings and my siblings. So, she was very much involved in our lives.

She cooked our daily meals until.. she was.... 90. Well, she was a healthy woman until that great power disruption of 1997. Imagine her running after us with a cane when she was 85. She could cross a busy road while on the way to church for Mother's day or Easter celebrations. Taking awards for being the oldest person in church for many many years.. **she was born on the same year Kampar Chinese Methodist Church was established, 1903.

She was a disciplinarian, taking over the role from my grandma who was busy making ends meet for the whole family. Everybody will turn up for her big birthday, her own grandchildren (lesser) and us her niece, nephews, grand nieces and grand nephews making up the majority. Her passing away brought much sorrow to our family... most of all to my small ku cheh.. hehehe.

Memories of her remain.. We miss her cooking a lot. She could cook many dishes that none of us could ever recreate.

This soup is one of it. My favourite soup from grandaunt.

I made this with a slow cooker, 4 hours on high. Heating up slow cooker, put in chicken and pitted red dates, then pour in boiling water. 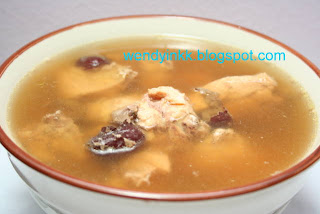 Posted by WendyinKK at 5:07 PM