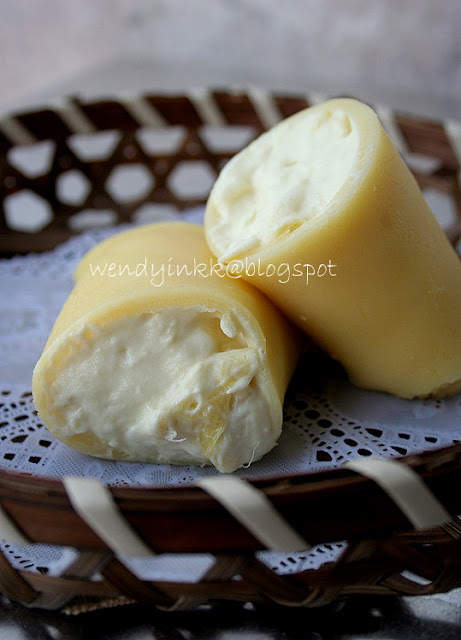 All my life, on this side of the country, durians have always been bountiful mid year and year end. Never has it been in APRIL!!!! With none during those usual times. I had been searching for durians last Dec (2010), with only a speckful of them around town and the quality isn’t there. This didn't happen only last year, but for 2 consecutive years, I haven't been seeing durians coming out the time that it should. Times have changed and it’s a wake up call to us about the changes in weather. The fruit trees are telling you to take note. 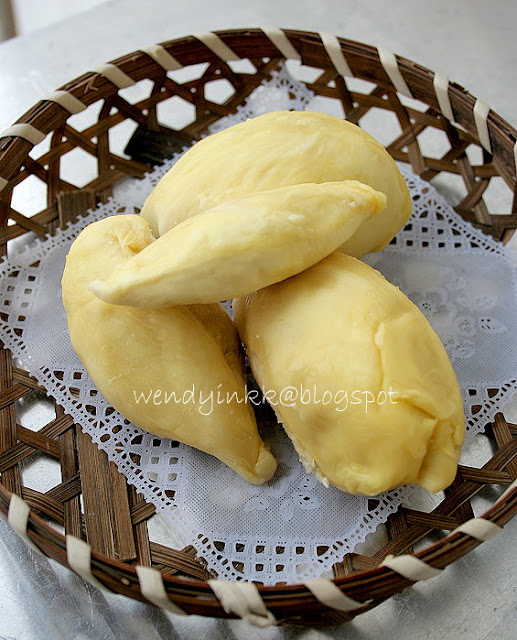 Last year’s durian harvest was rather pitiful, hardly seeing them by the truckload, my sister in laws who came back from US  during both the supposedly fruiting seasons couldn’t satisfy themselves with the king of fruits.
And mind you, even mangoes (local ones, I'm not talking about Thai ones)… with 3 huge mango trees back home when I was a kid, it was fruiting abundantly about the same time as the durians. But now… you see mangoes all around too, right? It just doesn’t seem to be at the right time.

FYI, on the east coast(Kelantan, Terengganu), I was told by my friend CTZM that durians are only available once a year around August. It is due to the difference of rainy seasons on both sides of the peninsula. She was shocked to see durians in June and early January during the one year we stayed together in Selancar.
But then again, it’s never April!!! 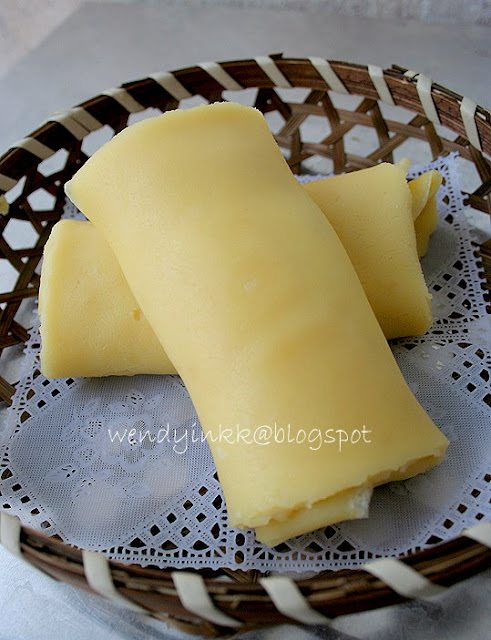 1. Melt butter in non stick frying pan over gentle heat. Turn off the heat.
2. Mix flour with cornstarch. Pour in half the milk and mix with a wire whisk until smooth.
3. Mix in sugar, yolks, melted butter and balance of milk. *Cover buttered pan until time of use.
4. Let the batter sit for 1 hour minimum. *Remember to put it somewhere away from crawling ants
5. Wipe pan with paper towel to get rid of excess butter.
6. Heat pan over medium heat, and lower to low heat (I used a very small outer ring heat and a very small middle ring heat, which is about 11o’clock on my gas knob).
7. Put in a small ladle of batter, swirl it around and cover with lid.
8. Cook until the surface looks matte and doesn’t stick to finger. There is no need to flip the pancake.
9. Lightly loosen the sides of the pancake and overturn pan over a large plate to dislodge the pancake. The pancake is too fragile to be handled with a spatula but will be more manageable when cooled.
10. Repeat frying of pancake until batter is used up (There is no need to butter the pan).

1. Freeze mixing bowl 15 minutes before use.
2. In a heat proof bowl, sprinkle gelatin over water and let it sit for 1 minute. Microwave for 20 seconds or melt over another bowl of boiling water. Set aside to cool.
3. Remove bowl from freezer and beat whipping cream until it starts to take form and put in sugar and beat until soft peaks. Put in melted gelatin and beat until stiff. Remove cream from mixing bowl and put into another container. Keep chilled.
4. Put durian flesh in the mixing bowl (after beating cream, no need to wash), and beat until flesh is disintergrated.
5. Fold in half the whipped cream until well combined and fold in balance of whipped cream.
6. You will have approximately 250gm of filling. Calculate and distribute filling evenly over cooled pancakes. Roll up and chill well before serving. 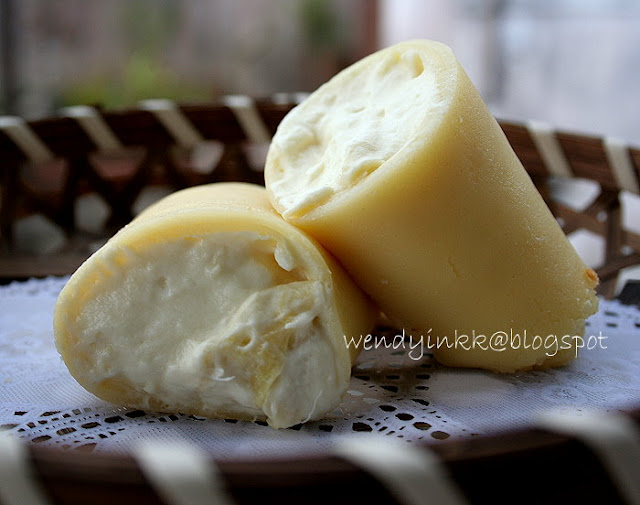