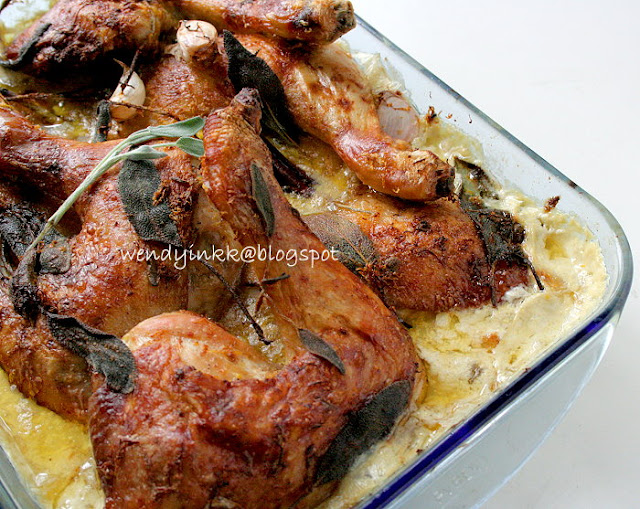 The name itself was interesting. I saw Jamie Oliver made this before on TV.

But it was when Anne of Pigpig’s Corner  made this, I was sold by the way she described it. She was more convincing that Jamie himself. LOL. Pop over to her blog and read her 'testimonial'. I actually made this dish twice.

First time. Didn't have sage but used thyme. Big mistake! The taste wasn't as good as I hoped.
I used a small pan which was just enough to fit the chicken. It didn't give enough surface area for the gravy to evaporate and the so called "melted cheese" was there, but not a lot. And the whole thing is tooooo soupy. I also find it.. hmm.. not as rich as I hoped it will be. The chicken was tender alright, and it is still a decent dish. But I told myself, I am defintely going to do this dish again, with sage and CREAM! I want this to be good, not decent.

2nd Attempt: You see, the types of herbs available in Jusco is unpredictable. There may be sage this week, but none later, you may see tarragon today but not tomorrow. When I finally got some sage, I remade the whole thing and it became very very delicious! It's the sage! The sage gives it a very special aroma that thyme couldn't give it. And cream....... what isn't nice when cream is added? LOL. This is me, the dairy lover.
The gravy was spectacular. We doused it over mash potaoes with egg and it was so good. The curds, as promised by Jamie will form, was very very nice. As if you're eating tofu, eating cream cheese, eating hmm...savoury panacotta. It's just very delicious. The added cream added a wonderful fragrance to the whole dish. It's not a must, but it's does make a huge difference, with and without.

I made this again for Reuben's Full Moon, but.. I forgot to put in garlic. LOL. It was still very delicious. So, skip the garlic if you can't take it, but frankly... the effect won't be too noticable, but off course, if you have it, it will definitely be better. My mom and brothers (and my guests too, but my brothers kept talking about it after the party) were raving about the chicken. My mom said, it still taste absolutely delicious even after 2 days in the fridge. Well, some chicken dishes taste weird after a while, especially the chicken flesh, it will have one sort of smell that shouts "stale". But she said this one was fine. 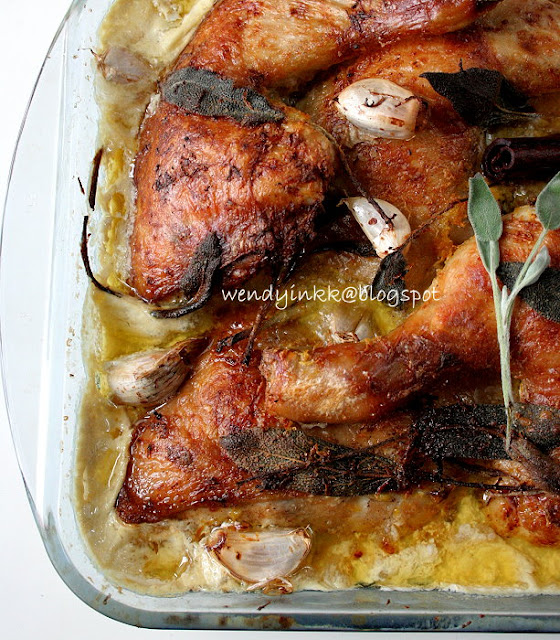 Drink the gravy like soup, drench your rice or potatoes with it. Spoon it over your mash, ladle it over your pasta. Just eat it anyway and don't waste it. It's the essence of this magical creation of Jamie. Chicken in milk... only he could think of this.


Chicken in Milk and Cream 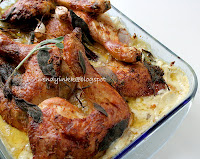 Recipe modified from : Jamie Oliver
As seen on: Pigpig’s Corner

1. Sprinkle salt and pepper over the chicken legs, and gently rub it. Let it marinate for 30 minutes.
2. Heat a pan/wok on high heat and put in few tablespoons of oil.
3. Lay chicken pieces in skin down and fry chicken until it looks golden. The wok must be hot and the searing must be quick so that you won't lose the precious juices (no need to be cooked through)
4. Remove chicken pieces into a 9X13 baking dish (some chicken parts will be higher than the dish). Do not put in the oil.
5. Combine milk, cream, cinnamon, lemon zest, and sage and pour over chicken. Stick garlic cloves between the chicken pieces. (the liquid may not cover all the chicken, but only partially, and that is fine)
6. Bake in a cold oven 180(fan)/200C for 50mins-1 hour or until the chicken turns golden and the milk looks like golden melted cheese. I brought all of these over to my inlaws to be enjoyed together
******************************************
added on 16 Nov 2011
Picture from my 1st attempt that wasn't too satisfactory.
Here's how the gravy will look like. Under the curds, this soupy gravy will form. You will see this clear broth when you pull that curd skin off. It shouldn't be too much as in, as if the chicken is bathing in the gravy, but just about half way up only or less. Nor should it be so dry that it taste like cream sauce. This attempt produced too much, the chicken was literally bathing in it. See the whitish thing like soft tofu, those are the curds. 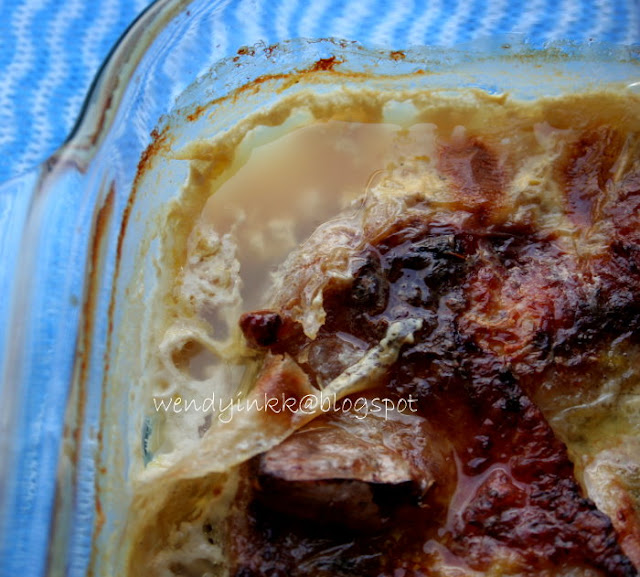