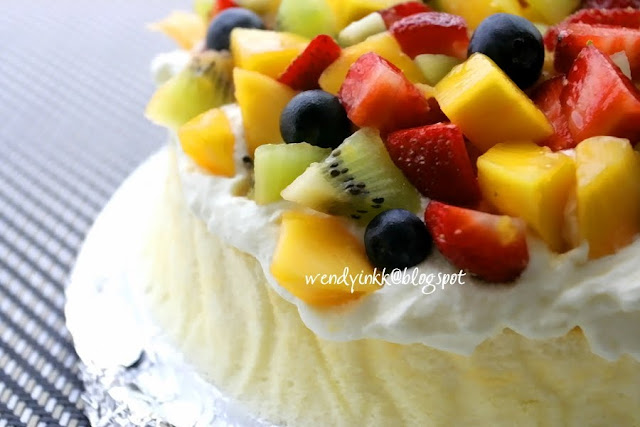 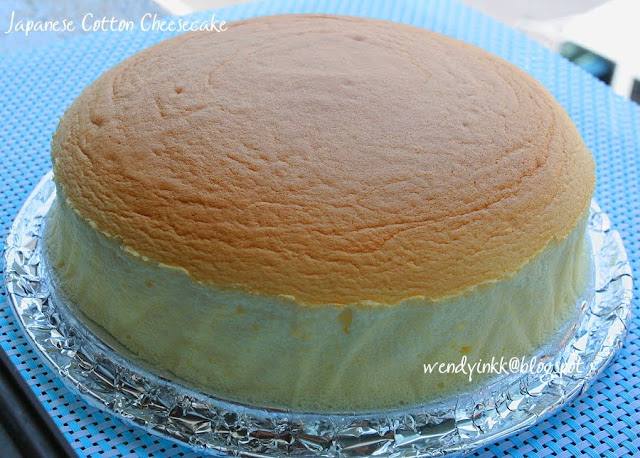 My mother in law is back to the States... just few days back. Can't wait for her return, so that I can get more stuff :)
And the night before she left, we had a simple Mother's Day celebration at PhongMun Restaurant Sg. Siput.
Ate 6 dishes and a cheesecake for dessert.

I knew she loves fruits, and cakes with fruits will be a lovely choice for her. And she has told me before she don't like canned peaches. I don't want to make a vanilla sponge to go with the fruits, that will be so ordinary. So, I thought and thought, what should I do for the base? Oreo Crust with no bake oreo cheesecake, or oreo crust with baked cheesecake, or sponge (Duh!!!! ). Baked or no baked oreo cheesecake will be too heavy for Mike's family who are not fond of desserts right after meals. And then I saw on Blessed Homemaker's , she made a Japanese Cheesecake. Yeah, that type of cheesecake will not be heavy, but nice enough not be boring. So, I took out my favourite cheesecake cookbook and tadah!!! There is the recipe and I have everything on hand.

Adapted from Alex Goh's Fantastic Cheesecake.
I didn't want to do it in 2 ovals, so I only made 75% of it and did it in a 8 inch round. I got a 2.5inch cake in the middle and a 2 inch on the sides and that's after it has shrunk. Oh yes, this cake will shrink, Alex said it will and it did, so don't fret about it being shorter than when it was fresh out from the oven.

1. In a heavy saucepan, cook cream cheese, milk and butter until thick and smooth. Set aside.
2. Preheat oven at 160C. Boil some water.
3. After the cheese mixture has turned warm and mix in both flours. Stir with a whisk until smooth.
4. Put egg yolks into the cheese mixture and stir until well combined.

5. In another clean bowl, beat egg whites (+ salt) until frothy. Put in cream of tartar and beat until soft peaks, add in sugar gradually and beat until stiff (soft droopy peak that will hold its form). 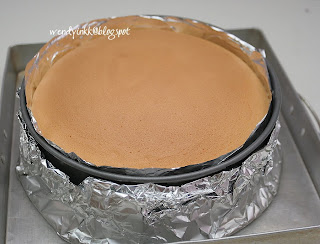 6. Fold 1/4 of egg whites into cheese mixture, and then another 1/4 of the egg whites.
7. Pour the cheese mixture into the remaining egg whites and fold.
8. Pour batter into a lined pan (you can just line the base and grease the sides, it's not a must to line the sides as well. Springform or regular pan will be fine, but spring form's base must be wrapped.)
9. Place cake pan into a slightly bigger, shallower pan. Fill the bigger pan with boiling water and put in oven to bake at 150C for 45 minutes.
10. Unmould cake immediately upon removal from oven, if not, the cake will shrink a lot. (If you're using a regular pan you can release the sides by running a knife between the cake and pan, and leave the cake in the pan to cool down). 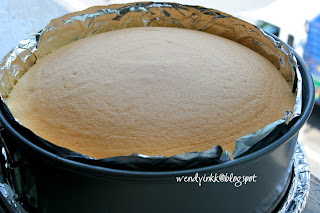 To make topping
1. Put water into a heatproof bowl. Sprinkle gelatin onto water. Wait for 2 minutes. Either heat it by double boiling or zap it in the microwave on high for 25 seconds. Leave gelatin mixture to cool down totally. 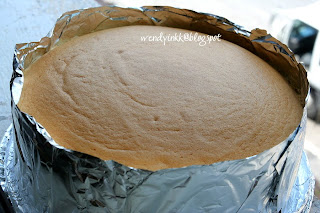 4. Mound whipping cream onto cooled cake. Top with diced mixed fruits. Chill cake in freezer for 10 minutes while you make the jelly topping.
5. Put water and sugar into a small saucepan, on medium heat, bring to a boil. Put in instant jelly powder and stir until fully dissolved.
6. Remove cake from freezer and glaze fruits with instant jelly solution. The jelly will firm up upon contact with the cold fruits.
7. Return cake to fridge and chill for another 2 hours before serving.


Verdict: Mother in Law was happy to see the cake and took pictures of it. She loved the cake, saying that it was cheezy but light. The cream with fruits add a nice touch to it. Everybody who ate this cake, although full with rice, still found this cake to be nice. Hehehe... sometimes when things only seem tasty when you are hungry, it might not be tasty at all, just because you are hungry. But when things still seem tasty when you are full, you can guess how nice it is :) 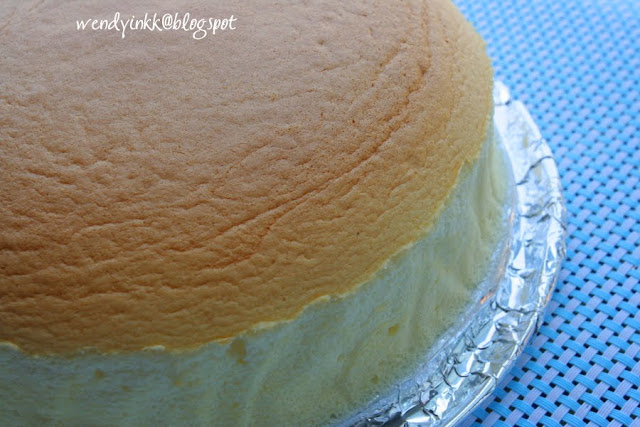