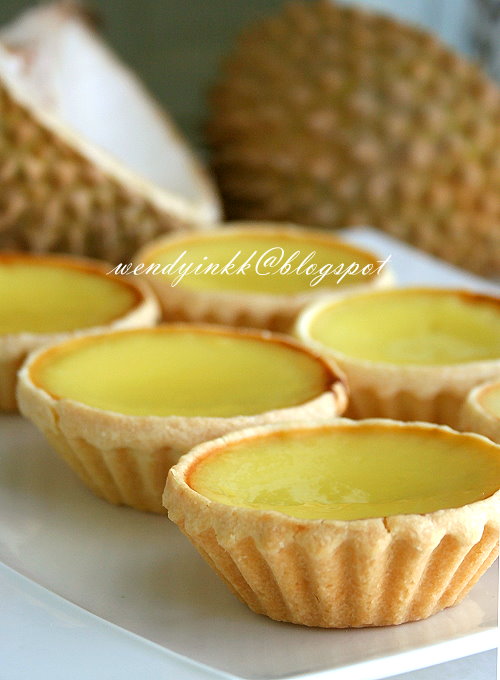 I had my first durian egg tart or durian custard tart  bought from Karak in 1999.. long ago.
It was a treat from my housemate from Kuantan. She always passes by Karak whenever she drives back to KL. She told me, whenever she passes by and if they are available, she must buy. Back in those days, the amount they make is not as much.

Durian bakes are extremely popular in Karak. I used to buy it from Yik Kee, I'm not sure if there are other shops doing it as well. It's situated on the main road. I do hear they have branches in Klang Valley and in Genting Highlands too. 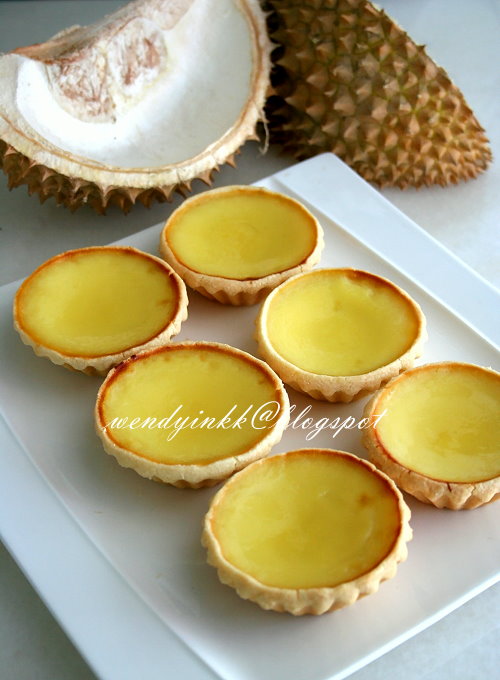 I made these with dunno-what-grade durians, but as long as your durians taste good, the tarts will taste good. My durians are reasonably sweet, and my filling's sweetness is just right. But I think if I used more sugar, it might be better as pastries do taste better when it's a bit more sugary. It also makes the custard smoother. But then again, it's still up to you and up to the durian :)

I remember a lot of my readers who tried my egg tart recipe said the crust is very fragile. I formulated another crust recipe this time, using the white as well, instead of only yolks, so that it will be less fragile, but still quite crumbly when eaten, but it also taste less rich with less egg yolk. Just make sure you emulsify the butter with egg well, before you put in the flour, 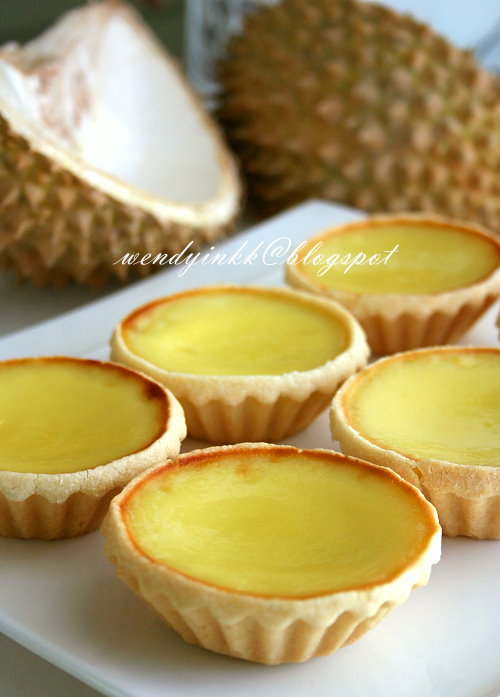 Now even with so much pulp, the egg tarts are not as strongly durian as those sold. My durians are nice to eat, although not graded. I wonder if the commercial egg tarts has durian essence added in since the smell is soooo strong. My custard's texture gets rougher with more durian as I have done the filling twice with different ratio of durian. But then again, I'll gladly trade the less intense fragrance than to use some durian essence.

I think if I add some flour to prepare the filling, the outcome could be smoother, just like the filling for seri muka. But I have no time to experiment anymore. I made this yesterday and here it is today. Phew!


1. With a mixing spoon, mix butter with sugar and egg until it comes together and turns creamy. Try not to incorporate air by whisking. Add in the flour mix until a dough forms.
2. Bring the dough together to form a lump. Cover and let the dough rest for 30 minutes.
3. Roll out dough into 6-7mm thick. Cut with a 3.5 inch round cutter. Place dough disk into a fluted egg tart pan, and press the dough to form.
4. Chill the formed tart crust dough until they are very firm. (Usually I do this the day before)
5. In a saucepan, put water and durian flesh and bring it to a boil on medium heat, stirring all the time. The flesh will melt away, leaving behind the fibres. Strain it. Leave to cool.
6. Mix eggs with salt and sugar (try not to incorporate air). Add in milk. Combine with cooled strained durian paste. Strain the whole custard mixture.
7. Preheat oven to 170(fan)/190C.
8. Remove crusts from the fridge and place them on a baking tray. Pour the custard filling until it's almost to the rim.
9. Bake it for 25 minutes until the surface of the tart sets. (If you made smaller tarts, it will need a shorter time)
10. Leave it to cool down to warm and remove from the tart pan.

*I got 22 pcs of tarts and only 1 Tbsp of extra custard.  How many pieces and how much filling is needed depends on your technique on shaping the crust.
Disposable aluminium ones might give you around 26-30 pcs.


﻿
﻿ I am submitting this to Malaysian Food Fest Pahang Month hosted by Wendy of Table for 2....or More