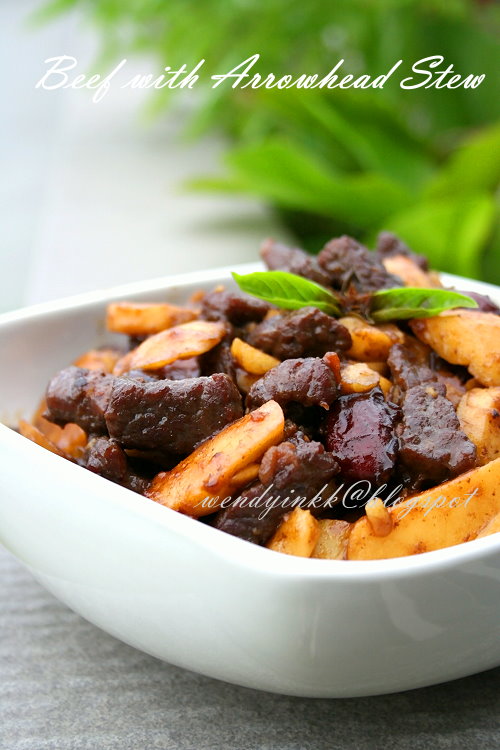 I was attracted to this recipe because of the use of Haw in this recipe. I didn't have that on hand and so I used Haw flakes instead, those round flat Chinese candy that we used to eat when we were kids. When I used that, I didn't need to add in sugar as well.

The original recipe didn't call for black vinegar, but I found that it lacked that edge... or maybe it's because I didn't use dried haw of which is a lot more tangy than haw flakes candy. Maybe next time I'll try it with dried haw.

For this dish, my hubby gladly ate up everything even the arrowheads of which normally he'll give a skip. 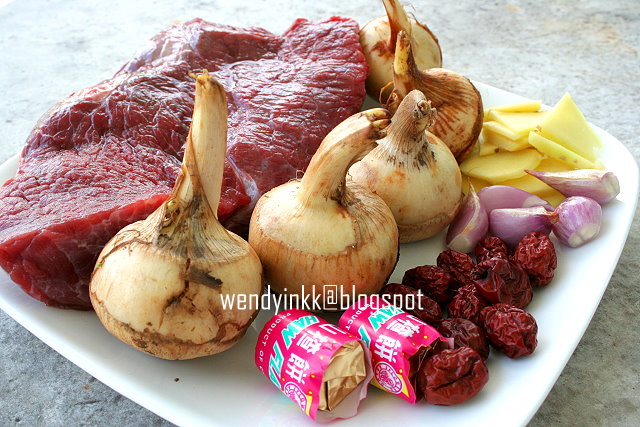 The recipe didn't come with measurements. This is what I used.

1. Slice beef into thick matchsticks and marinate with 1Tbsp light soy sauce for 30 minutes. Before cooking, mix in 1 Tbsp oil.
2. Heat wok and put in 2 Tbsp oil. When wok is very hot, put in beef and cook the beef until some parts are golden brown. Push to the side.
3. Put in shallots and ginger and cook until fragrant. Push the beef back in and put in red dates, arrowheads, haw flakes, black vinegar and enough water to cover. Simmer for about 1 hour or until desired tenderness. Put in another 2 Tbsp light soy sauce.
4. Reduce the gravy and season with salt and pepper if needed. Email ThisBlogThis!Share to TwitterShare to FacebookShare to Pinterest
Labels: Arrowheads, Beef, From the net, vege-rootbulb