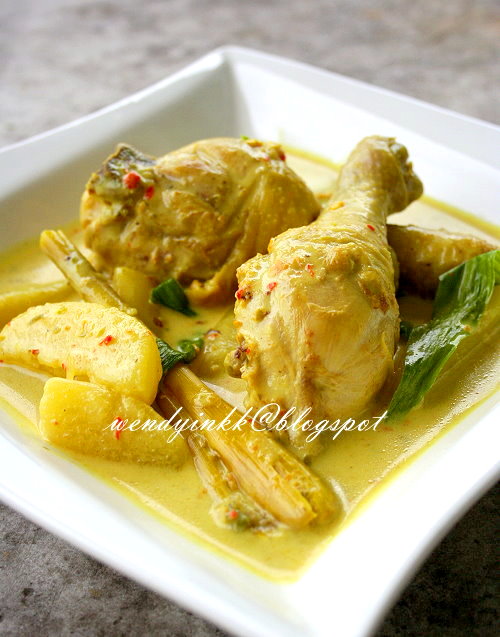 Negeri Sembilan is a very special state with a strong Minangkabau culture. It's nice to be born as a girl in a Minang family. They practise girl-power, LOL.... and you get to inherit, instead of the guys.

Besides being known for it's horned roof houses, it is famous for it's fiery dishes. It should be so fiery that you can feel your ears hissing, LOL. But then again, you can always tune it down. But that's how fiery it should be. 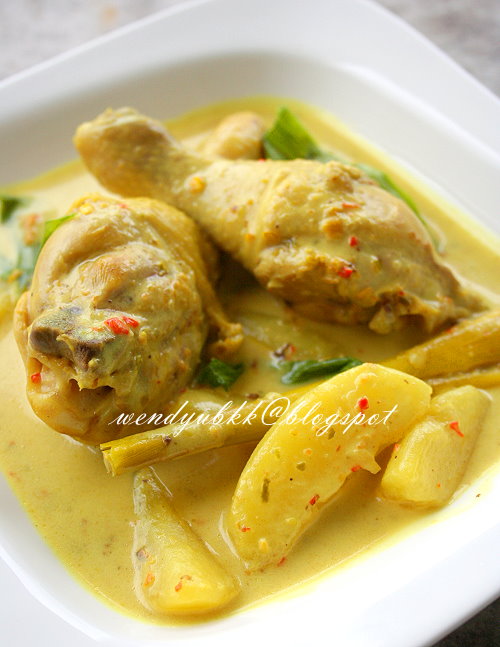 I talked about my Minang friend, Ainur in a few dishes (Noodle pancake and Nasi Goreng Kampung). This is another dish I learnt from her. I used to think that I should saute the ground ingredients like onions, garlic and turmeric before adding chicken and everything..... but after observing her cook, there's no such thing! It's very basic and that's the Minang version. No onions, no garlic, no sauteing........ A method different from the versions of other states. Well, if you check on the internet, there are a few other blogs that confirms this fact. And Masak Lemak Cili Api is one of the signature cooking methods of the Minang culture in Negeri Sembilan.

She told me there's no potatoes usually, but can be added if one likes it. I like it, so I added. She also told me to stir the gravy all the time to prevent it from curdling. I have to admit here, I took a shortcut. I used my normal method that is to add in the coconut milk at the end to prevent curdling. But then again, one can't add all of it at the end, the fragrance will be missing. If one makes a lot of gravy then I think it's possible to be stirring all the time, but since we don't consume so much gravy, it's a bit hard to stir without 'destroying' the chicken. Nowadays chicken are way tooo tender for such rigourous handling.

﻿
You can masak lemak cili api with a lot of other things instead of chicken and just chicken. Duck eggs, duck, beef, fish, brinjal, pumpkin.... it's the style of cooking that is of the state. It is not only confined to chicken.

And I used way less coconut milk than the norm, because like I said, I didn't prepare that much of gravy. If you want a lot of gravy for this to be served with noodles, go ahead and double the coconut milk and water. You will like it with your favourite noodles. The norm is 2 to 3 coconuts per chicken. 1 coconut is 200ml of coconut milk.  Don't worry about the coconut milk, it's rich lauric acid that's good for you. It is supposed to taste fiery hot and rich.

Take note that some bird's eye chilli is hotter than some, use at one's own discretion. But then again, 5 pcs won't make the cut. Don't skimp that much! Go ahead and start hissing up your ears! 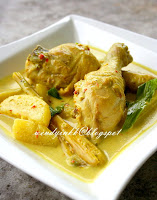 1. Grind chilli and turmeric together.
2. Put chicken pieces, chilli paste and lemon grass into a wok.
3. On medium low heat, let it cook until the meat turns opaque and you can see the base of the wok looking greasy.
4. Put in diluted coconut milk, stir and bring to a boil. Make sure amount of liquid covers the chicken, if not, add more water.
5. Put in potatoes, turn heat to low and simmer for 30 minutes (cover with lid)
6. Remove lid, turn heat medium and then add in salt, taste, adjust if needed.
7. Put in turmeric leaf and balance of coconut milk, gently stir it for 10-20 seconds and turn off the heat.

*If you can't get turmeric leaf, it's ok. Having that is a bonus. 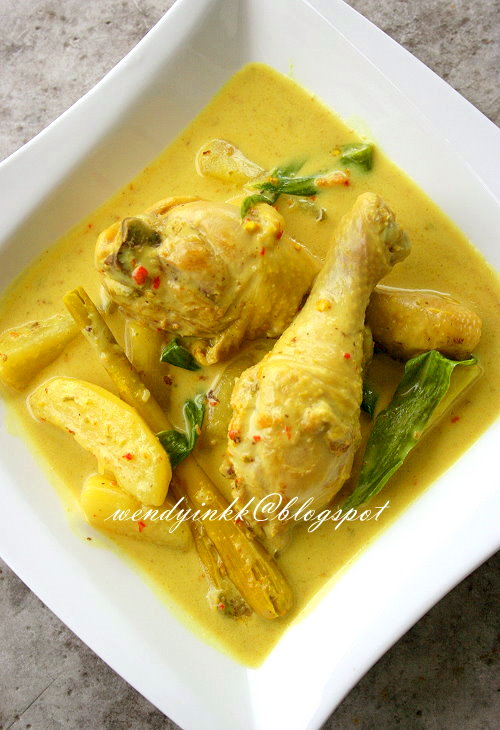 I am submitting this post to MFF Negeri Sembilan Month hosted by Hody Loh of Cook for U & Me
Posted by WendyinKK at 11:00 AM