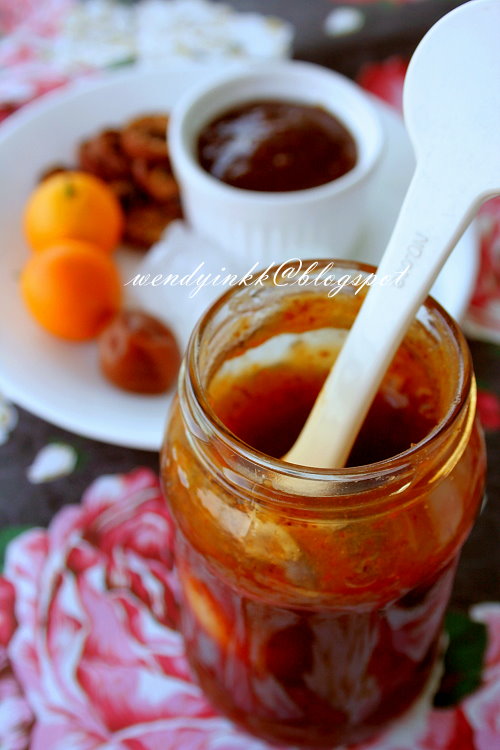 My family never eats out during Chinese New Year, due to the heavily inflated price that is often called as crazy. Hence, I never ate 'yee sang' until I was 16, and I went out with friends for dinner during this festive period. I felt it was delicious, but chickened at eating raw fish, that was long ago..... now I eat sashimi like a shark.

For those who have no idea what is 'yee sang', it's a festive Chinese Salad that is made up of raw fish (shashimi) tossed with fine strips of vegetables and crisps in a sweet and sourish dressing. It's a popular Chinese New Year dish in both Malaysia and Singapore. During the tossing, one should say all the nice things, wishing everybody prosperity and everything that is good. The higher you toss, the better it is. So, it can get kinda messy if you have friends like mine, who likes to say non sensical things during the tossing and hence the laughing and subsequent mess. LOL.


During my 10 years in KL, I have eaten quite a number of times of yee sang and each time I seem to dread it. The reason was... there was much less fresh vege and too much dressing! Plus the dressing in KL seems to be very sweet. The taste is not the same, and the colour seems pale. I can't detect any fruitiness in it, it's all about sweeeeeeeeet, and that's all. I won't place this opinion on all restaurants in Klang Valley, but somehow... it could be the few places I happen to go to.

I have never made yee sang sauce before, but I knew it's plum sauce with kumquats. I thought of doing it just like that this year to blog about. But when I cooked the red cooked duck with kumquats, it dawned upon me that the kumquat plum combination has a missing component and that is Haw. It is this haw that gave the dressing the zing, this haw that gave the brown dressing I grew up eating that reddish tinge.

And so I came up with this ... it just brings back lot of teenage memories... the fruity taste is how I like it to be. 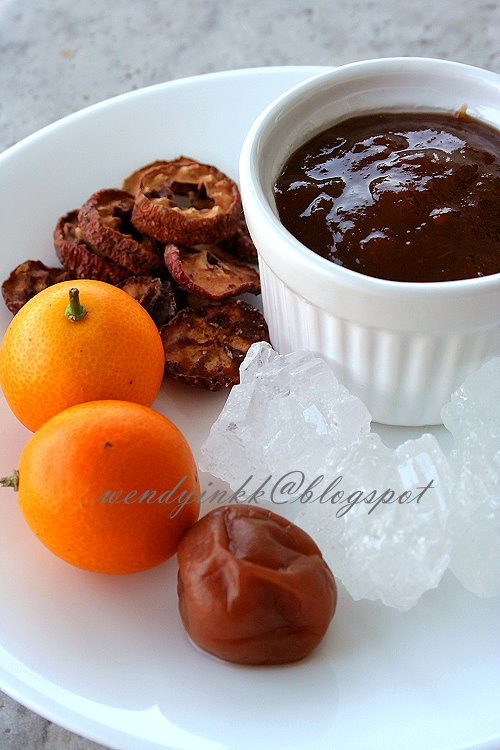 1. Bring water to boil in a small pot. Rinse dried haw and put them into the boiling water. Lower to a simmer for half an hour.
2. Meanwhile, half kumquats and remove the seeds, cut the kumquat into small pieces. After 30 minutes, put the kumquat and rock sugar into the pot.
3. Remove seed from pickled plums and put the plum flesh into the pot.
4. Cook until the kumquat looks translucent.
5. Blend everything to a fine sauce. (I use a hand immersion blender, if you're using jug blender, let it cool down to warm before blending)
6. Cook the sauce until it resembles the consistency of honey. (It will thicken slightly upon cooling down)

*If kumquats are big, use 70gm instead because big ones will yield less rind with the same weight. Less rind, less flavour.

I made the 'yee sang' last night to test this 'sauce' and tossed it with my extended family. They gave me good feedback, and requested me to make this for the reunion dinner. What I used : Daikon, carrot, red capsicum, yellow capsicum, coriander, spring onion, pickled ginger, pickled onion (to replace kiu tau), grapefruit arils (in place of pomelo arils) and crispy wanton wrappers. I had prawn crackers unphotographed because this was shot 2 hours before dinner time. I didn't want the cracker to lose its crispiness.

For the dressing, I used shallot oil, pepper, 5 spice powder, toasted peanut nibs, toasted sesame and last but not least, my homemade yee sang sauce. I actually forgot lime... but then nevermind.. it's ok.

I chose not to use those coloured crispy noodles. This version is vibrant enough for me. To me, I like the pungency of the pickled ginger and onions (original is kiu tau), and I won't skip these two. 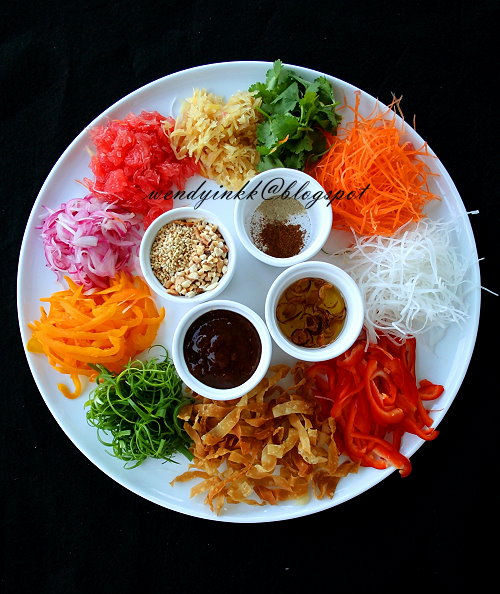 I actually made triple the daikon and double the carrots than shown here, due to photography purposes, I arranged them this way, almost equal visually. But it taste better with more fresh vegetables.

Ok then, I got to scoot to KL now and be there for tomorrow's for my first ever public baking demonstration for QBB Ghee.
See you there at Midvalley Convention Center 2-4pm.

This is the booth that I'll be at. 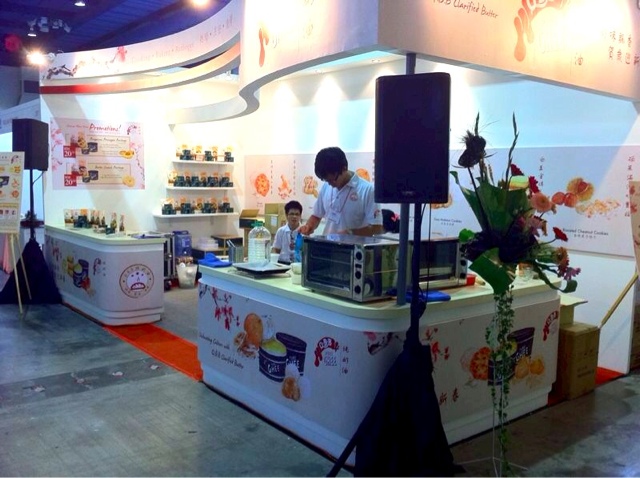