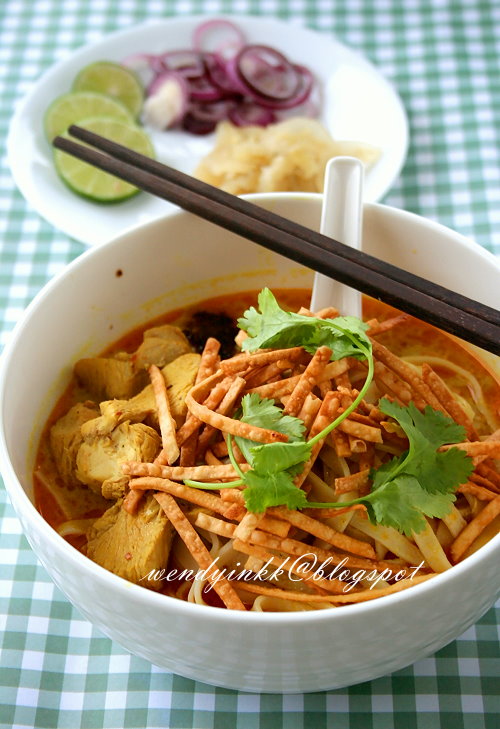 Khao Soi or sometimes written as Khao soy is a Burmese influenced dish that is  popular in northern Thailand. 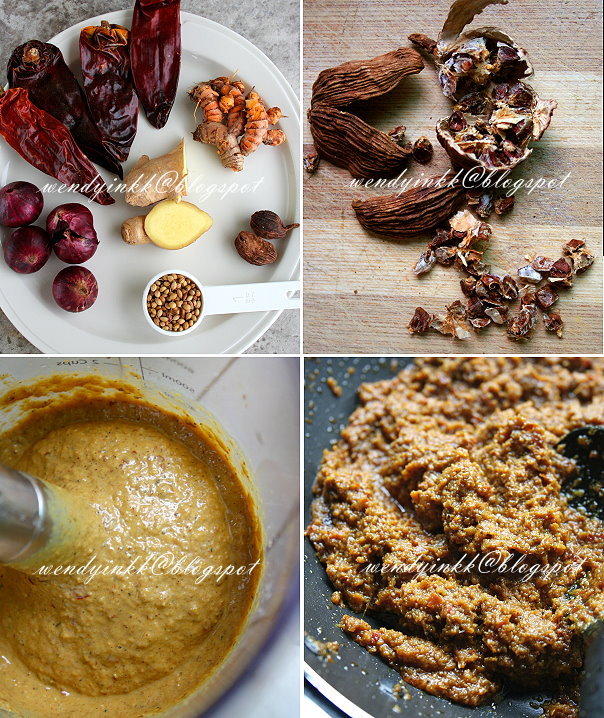 Then I remembered, I do have a Thai friend few doors away from my hubby's office. I call her Ah-Nee and she is from Chiang Rai. I cooked the paste, and brought it to her for a taste test. She said,"Yumz, it's correct, just add some lemongrass and kaffir lime leaf and it'll be perfect, and jack up the heat too". She then told me how it's prepared in her village. It can be made with chicken or pork, bone on, chopped into small pieces. They also prefer to eat it with rice noodles and got shocked when I asked her about egg noodles. She said, she's not sure about other places, but in her village that borders Myanmar, they eat it with rice noodles. Even the crispy noodles are fried rice noodles or glass noodles. And before I left, I asked her again.. any curry powder in it. She gave me big response, "GOSH NO!" and she reminded me to serve it with shallots, not onions, and to put the coconut milk into the broth at the very last minute. 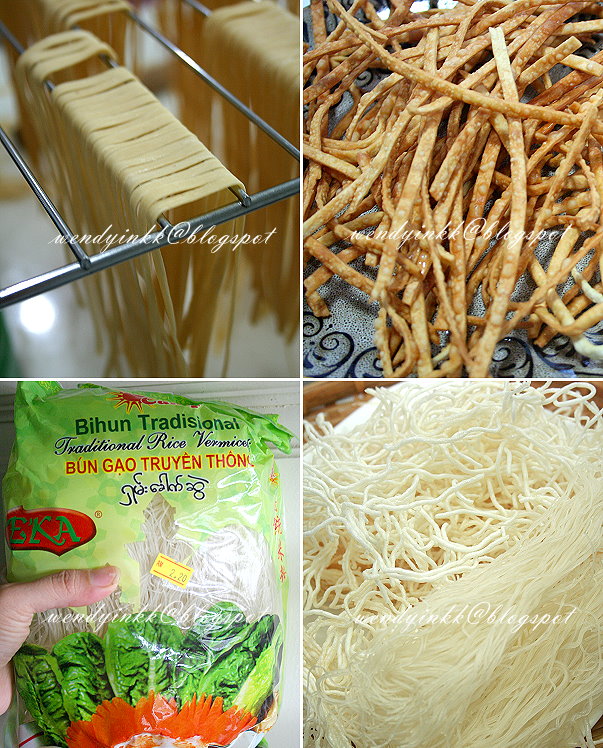 For this noodle... I read that, in Chiang Mai, it should be served with egg noodles, not Chinese wanton noodles as it shouldn't have any alkaline smell in it. And so.... I made my own egg noodles, broadly cut, just like how I see it in the pictures. The whole process is a lot of work and so I split the job to be done within 2 days. One day to do the paste, the next day, the noodles and final broth. Everything is ok,but I loathe frying the noodles. Don't know why..but maybe I was rushing for dinner, so I hated the frying part. LOL.

Final taste is a great relief! Hubby enjoyed it and so did Reuben :)
The girls had other gravies with the noodles. Yes, plural as both girls have different tastebuds. 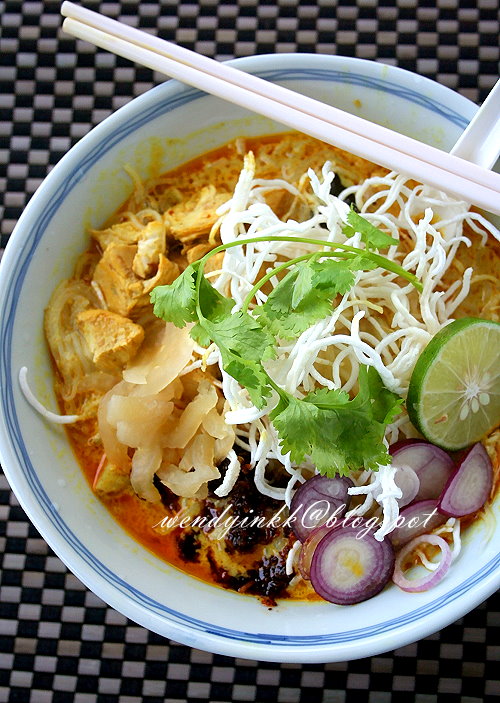 When I had my second bowl of noodles later at night... it hit upon me that the flavour is very very familiar. I remembered I had Thai laksa at a Thai fair before (I tried googling, there is no authentic "Thai Laksa" from Thailand, just Thai noodles). It was exactly this taste. But the toppings were different. And they used a rice noodle that is as thick as angel hair pasta. Now, no wonder Ah-Nee recommended me the Vietnamese rice noodle, it actually tasted pretty similar in texture, just that it was rather fine compared to the one I ate before.

I'm pretty happy that this version that I made registered on my tastebud as something I ate before..but I do hope to know that the "Thai Laksa" from the Thai Fair is actually Khao Soi, then I can tell you how close this recipe is. 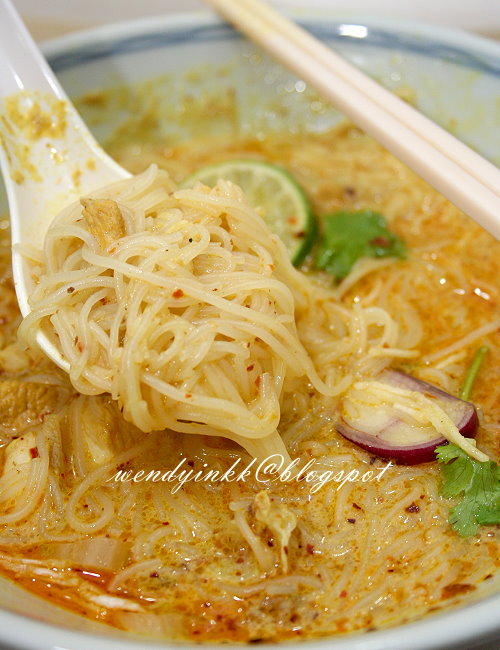 I packed a few portions to give to Ah-Nee and her friends, and she told me, my version was all on the spot.
I asked her, what are the exact ingredients she put in (I didn't tell her what I put in) and her ingredients are all that I used, except... the black cardamom. Then I asked her about the black cardamom, she said, some do use it, it's optional. Every family will have their own version, and no two are exactly the same.

Lastly before I left, I asked her about the Thai Laksa sold in Malaysia at Thai fairs. She told me, that is Khao Soi.
Yay!!! I'm glad my tastebuds were right! 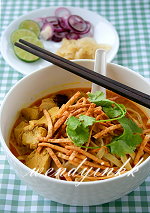 1. Remove seeds from dried chilli and wash it clean. Air dry it. Snip into smaller pieces
2. Remove seeds from black cardamoms (discard shell) and toast it together with coriander seeds on a pan until it smells good. Set aside. Grind until fine. (I use a mill)
3. Put shallot, ginger, chilli together in the pan and toast it until it smells good. Grind or blend this until fine like puree. Add some coconut milk (from the allocated amount) if it's hard to puree.
4. Put coconut milk into pan, and heat until you see the coconut milk starts to crack. Put everything in and saute on medium low heat until it is very fragrant and looks very glossy. Set aside for use later.

1. Bring water to boil.
2. Put in chicken, lemon grass and spice paste into the boiling water. Let it simmer for 30 minutes.
3. Put in kaffir lime leaves and all the seasonings. Taste and adjust accordingly. Make it very slightly oversalted (remember the coconut milk).
4. Bring the broth back to a rolling boil. Pour in the coconut milk, stir it all the time, when it comes back to a boil, turn off the heat. 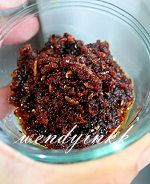 1. Remove seeds and wash the dried chillies.
2. Grind all the ingredients together except the salt
3. Saute in 3-4 Tbsp of oil with salt, on medium low heat, until it turns dry and crispy.

Place single portion noodles in bowl. Pour the broth over with some chicken pieces. Sprinkle crispy noodles over and garnish with spring onions or coriander. Serve lime, shallots and pickled mustard separately. (Or just dump them all in). Adjust heat according to personal preference with chilli paste. 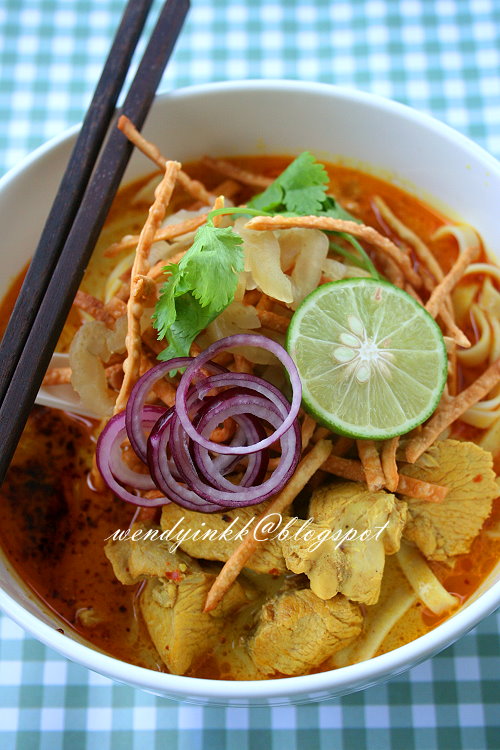