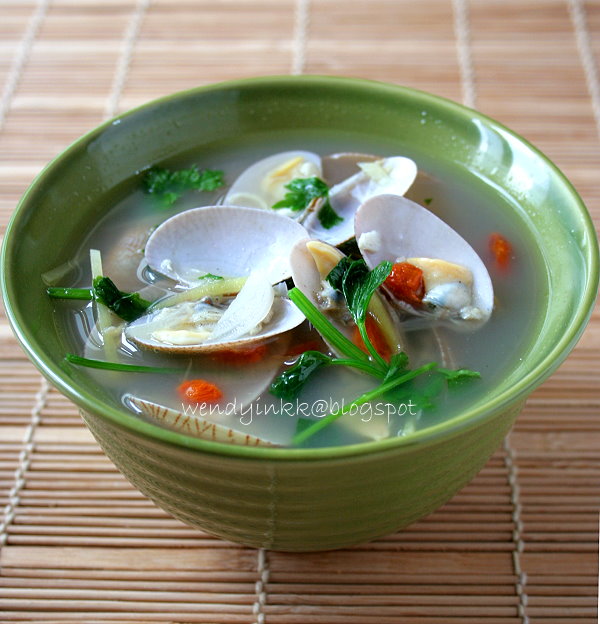 Lala is the local name for the clams used here. It's a thin shelled clam that is not found countrywide naturally. But sold countrywide. Maybe for the peninsula only. I'm not sure. East Malaysians, would be glad to get your clarification on this.

I'm not the type of person that consumes all molluscs. I don't like mussels and oysters. But I like them in soups, but don't ask me to bite into one. I CANNOT comsume cockles, no matter how tasty they are, no. I'd be in the toilet the whole day. I like scallops but they are too pricey. So, the cheapest and tastiest for me is Lala.
Used to be cheaper, but recently due to low supplies, prices hit RM8kg, which is considered rather pricey.

Lalas are very sweet, but they are dirty. They live in mud, not sand beds. So, you must wash them internally before cooking.
How to wash the insides? Soak them in salt water(as salty as the sea), not fresh water. If not, you'd kill them. You don't want to eat dead clams. When they sense there is salty water around them they will open up their shells and this way, the mud in them wil be spit out as well. Soak for a few hours at least. And never ever chill your lalas, you'd kill them too. Buy them the day you want to eat. If you intend to cook it for dinner but bought it in the morning, keep them alive in salt water. After cooked, do not eat any closed clams. Only eat opened up clams.

If you intend to cook them with a thick gravy, do not dump them straight into your wok. They'd release so much moisture you will have soup at the end and not thick gravy. Parboil the lalas before adding into you favourite gravy. You can check out my Spicy LaLa post.

But today, I intend to cook this with something light and clear. With broth. My hubby was estatic when he knew I was cooking lala for dinner, but when he saw I cooked it in broth, he said, 'Ohh Wasted. I thought you're going to cook spicy lala." But in the end, he slurped every bit of the broth, took 2nds and 3rds. Licking the bowl clean each time. Hahah! Never judge a book by its cover, or maybe a broth by it's colour.

This dish is inspired by Shogun. A Japanese buffet restaurant in Klang Valley. I know it's not one of the best places to eat Japanese food, but just close one eye for the price that one pays. They have this 'clams in superior stock' that I'd eat by the bowlsful each time I go there. My hubby wonders why. Hahaha. I did not use superior broth, but just frugal dried anchovies and this is good enough for us. The soup was cleared up by only 4 adults. MSG free and absolutely SWEEEEEEEEET! 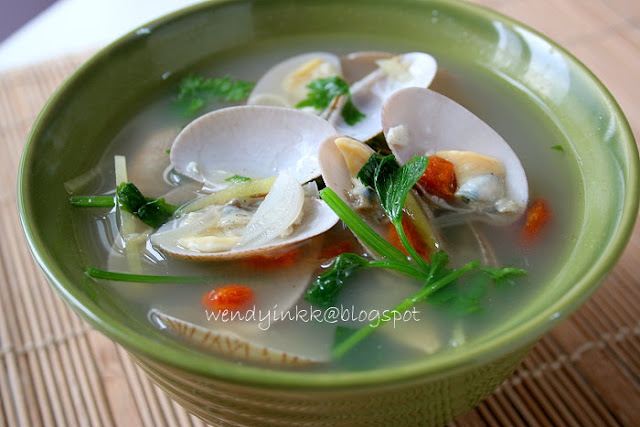 1. In a small pot, put in 1 tsp oil and saute rinsed anchovies for a while. Put in water and bring to a boil. Lower to a simmer and cook until broth turns whitish.
2. Soak lalas in salt water for few hours. Wash and rinse a few times in fresh water just before cooking. Removing clams with only mud in them. Some clams were long dead and the shells were filled with mud instead.
3. Heat a bigger pot /wok and put in 1 Tbsp oil. Put in smashed garlic and sliced shallots and cook until fragrant, no need to be golden.
4. Put in rinsed lalas and pour in hot strained broth. Add more water if needed. Put in ginger.
5. Bring a boil and season with salt.
6. Put in goji berries and cook until clams have opened up. Turn off the heat and put in Chinese celery and Shao Xing Wine. 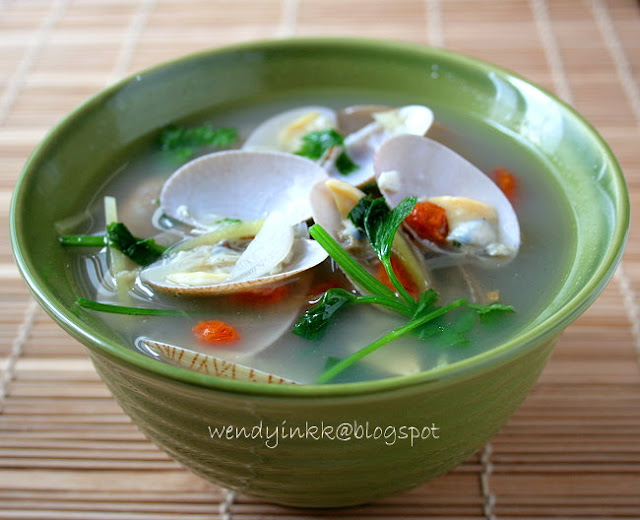 Don't forget that I'm posting Mon-Fri.
See you on Monday.
Berry Week
Posted by WendyinKK at 11:25 AM