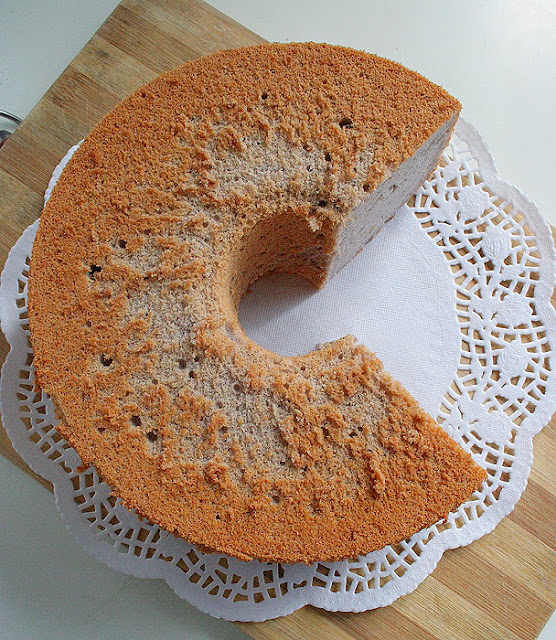 A bluish purple cake is such a pain the neck to produce without food colouring added. Natural pigments like anthocyanins found in fruits and vegetables seem to not remain prettily purple after baking. So, I tried to play around with its colour. The colour of the pigment can be easily altered by either adding an acid or an alkali. Acids like lemon juice, vinegar and alkali like baking soda.

I also found that South American blueberries tend to have a redder hue, compared to the ones planted in US. When I cooked the blueberry paste, I found that it turned magentaish, something like the colour of Barney the Dinosaur because I made it with SA blueberries, grown in Chile. I tried another batch with Argentinean blueberries and they too, turned to the colour of Barney. When I made my Blueberry Ripple Yogurt Ice Cream last time with American blueberries, the colour was more bluish. Which was why I realised the colour difference. Your opinion may differ from mine, this is purely my own opinion. So, in order to turn it to become more purplish, I added some baking soda bit by bit to turn it into the colour I want. Don't get it too blue as when it gets made into a batter, it turns bluer. Which might explain why some blueberry bakes turn greyish. Too alkaline already. I guess that is more rampant with northern blueberries. To counter that, add in some lemon juice.

Actually at first I didn't think of turning this into a lemon flavoured chiffon. But when I mixed the blueberry paste with the yolk batter, it turned blue!!! Oh.. now I'm starting to worry that it'll turn grey instead when baked. And that was why I added in some lemon juice and zest in the end to counter it. This chiffon cake was bluer when fresh out from the oven, I peeked at the crack. But as it cooled down, it turned to be a soft lilac coloured chiffon. Oh well, better than a grey chiffon. Hahaha! 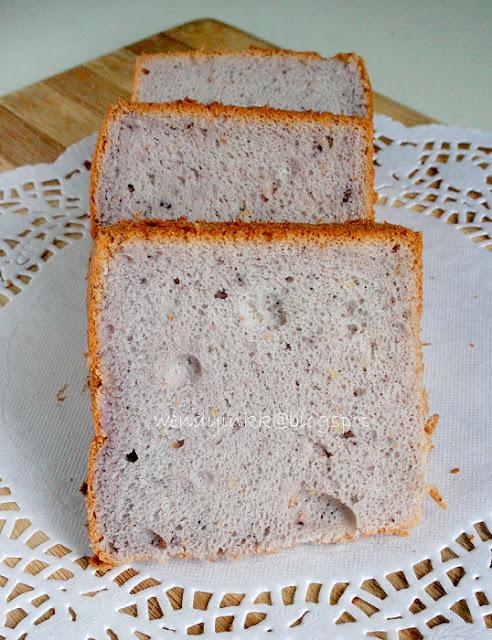 The pictures do not look sharp with high noise due to my hubby adjusting the ISO to the highest and I didn't know.
I only knew he clicked on the settings after I complained that all my pictures weren't sharp with weird light exposures and they all gave me a hard time editing and he checked the settings. A lot of up coming post with high noise problems were all taken during this period of time.
Blueberry Lemon Chiffon Cake
Recipe source: Wendyywy

1. Preheat oven to 160(fan)/180C. Prepare a clean 22/25cm tube pan. Do not grease it.
2. Combine the yolk, sugar and oil and mix. Mix in the blueberry paste.
3. Sift flour and baking powder. Mix into (2)
4. Mix in lemon zest. Use lemon juice to adjust colour. If it turns too pink, add some baking soda. It the batter is too blue for you, use more lemon juice. It's hard to say how much as natural pigments varies in different berries.
5. In a clean bowl, beat egg whites until frothy. Put in lemon juice and beat until soft peaks.
6. Gradually put in sugar and beat until stiff peaks.
7. Put 1/4 of the egg whites into the batter. Fold. Repeat with another 1/4 of the egg whites.
8. Pour batter into the egg whites and fold.
9. Pour folded batter into prepared tube pan and lightly shake it left and right to level it.
10. Bake for 40 minutes or until done.
11. Invert immediately upon removal from oven and let it cool down totally before removing from the mould and slicing to serve.


I am submitting this to Aspiring Bakers March 2011 Fruity March
Posted by WendyinKK at 11:26 AM