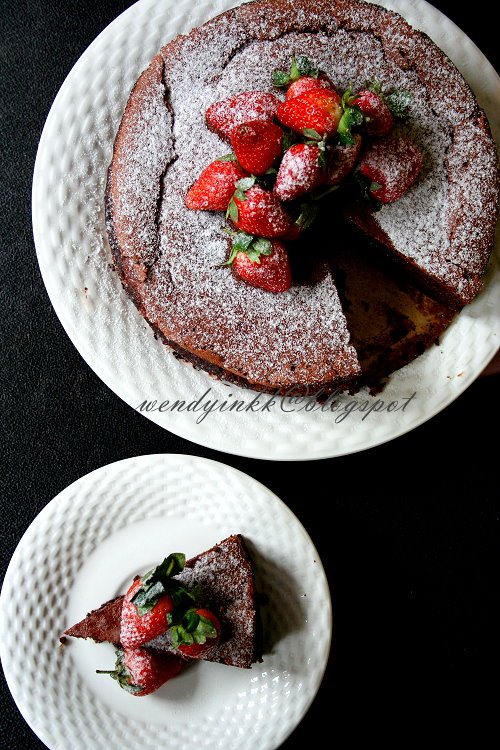 Sometimes I am greedy.

I saw Nutella going ‘Buy 1 Free 1’ and so I grabbed 4 and paid for 2. I knew the expiry is in 4 month’s time. Usually this is a Fast Moving 'Edible' Good in my household so 4 jars is no big deal. But no no no! During Christmas season and then all the pre-CNY preparation has left these jars of deliciousness untouched in the cabinet. By the time I remembered them it was 1 month to expiry.

I had to bake with them in order to use them up ASAP.

This is my first bake with Nutella, no joke. Usually I am too scroogy to use this in bakes as Nutella is quite expensive. The Nutella Chiffon cake was baked a week after this cake.

How was this cake? Hmmm.. it so happened that my hubby’s friend dropped by with his elderly mom. I asked if she wanted some. She told me she’ll have a small piece to share with her daughter in law. When I served her one ‘regular’ piece (since she will be sharing), she ate it all up herself.

I asked her, “Auntie, I thought you’d be sharing with Jenny?”
Auntie laughed and said ,”It’s very nice. Normally, I don’t eat cake, but I want to finish this up.”


That was the first cake.

Two weeks later, I made another one and brought it  to my mom.
My nieces ate giving me thumbs up and thumbs up.

And the second one was better with the same recipe... because it was all set nicely. The time given is a guideline, let your eyes be the judge. The dome stops growing taller when it's done. If it starts to shrink even when it's still baking, remove it immediately. Any longer and it will be over baked with a tendency to turn dry. 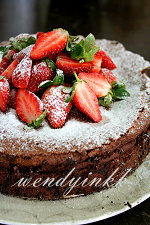 Butter for greasing and cocoa powder for dusting

Snow powder and strawberries as garnish

1. Preheat oven at 180C (fan off). Butter and dust the sides of a 8 inch spring form fan with cocoa powder. Line the base with baking paper.
2. Melt butter and chocolate together in a heatproof bowl (either microwave or double boil). Stir until smooth.
3. Put in nutella and mix until smooth. Put in egg yolks one by one and mix well after each addition. Mix in dissolved coffee and vanilla.
4. Beat egg whites until medium stiff and gradually beat in sugar until medium stiff peaks form.
5. Put in half the egg whites into the chocolate mixture and stir with a spatula (yes stir!), scraping the base as you do it.
6. Put in the balance of egg whites and gently stir until combined.
7. Pour batter into the prepared pan, it’ll be around 2/3 full.
8. Bake for 35 minutes or until a dome forms over the rim. Remove from oven and let it cool down before serving. 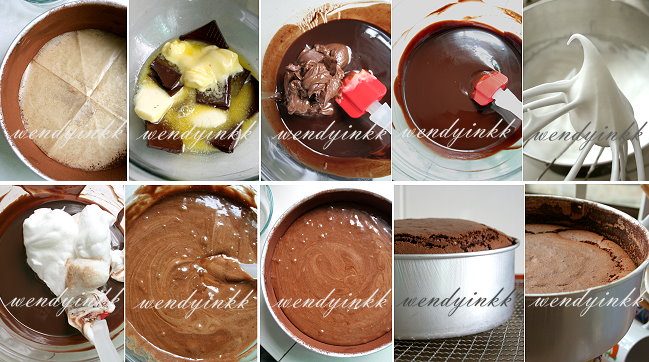