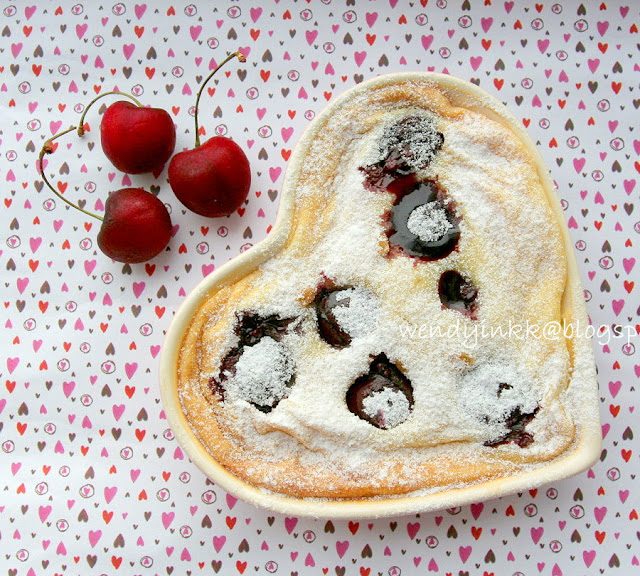 A not too stale post, did this less than 10 days back. haha.

I’ve never thought of making clafoutis until I saw on Gourmet Baking . Her clafoutis looked so good. So, I googled for more recipe, but still I went back to hers cos it has cream and less flour, something that I prefer. One blogger, Ju just made a cherry clafoutis, posted it yesterday, but she didn't like it, but she used another recipe of which lost to this recipe during decision making time, simply because the recipe she used used only milk and this one uses cream and heck lot of it. Intuition tells me cream taste better than milk, and better not risk wasting those precious cherries. And custards with less flour always taste better than more, I'd rather have softly set custard than hard custard. So, I made the choice to use this recipe, and am glad I did not use JoyofBaking's after reading her post.

Although traditional clafouti/clafoutis will require the cherries to be left unpitted, so that the seeds will release flavor into it, I chose to remove the seeds. I have 2 toddlers, you see and they’ll be definitely eating this. I don’t have a seed pitter (you can easily get this at crockery shops, ask for those things used to remove red date seeds, they are the same as a chery pitter), so I used chopsticks to poke out the seed w/o damaging the whole fruit.

To pit the cherry using a chopstick, first, make a small incision (with a knife) at the bottom of the cherry, directly the other side from the stem. Poke the chop stick in, you’ll feel something hard. Push it firmly but gently, so that you won’t squash the fruit. Then remove the chopstick and push from where the stem was. Finally go back to the bottom of the fruit and push the seed out. Perfect pitted cherries using common household utensil!!!!!


65gm whipping cream
35gm milk
½ empty vanilla pod (I always keep the scraped pods for times where only a little bit of vanilla is needed), or use 1/8 of a unscraped pod
17gm or 1 ½ Tbsp sugar
1 egg
23gm or 3 Tbsp all purpose flour (sift before measure)
1 tsp Grand Marnier or Kirsch(optional)
A few fresh cherries, pitted or unpitted.
Icing sugar for dusting

1. Preheat oven to 160/180C
2. Heat milk, cream and empty vanilla pod into a small saucepan and bring to boil on the lowest heat. Put in sugar to melt. Set it aside to cool down.
3. Meanwhile, beat the egg in a bowl.
4. Fish out the vanilla pods and pour the cream mixture into the egg. Whisk to combine.
5. Put in flour and whisk to combine.
6. Put in liquer and stir.
7. Pour into a shallow baking dish. (no need to grease, it comes off nicely)
8. Put in pitted cherries and bake for 30 minutes until surface of the clafoutis is golden.
9. Dust with icing sugar.

How does a clafoutis taste like???? Kuih bakar/bengkang, western version with fruits and milk. Haha!!!!
Well, it is similiar, look at the ingredients, what was coconut milk was replaced with milk and cream. What has been pandan was replaced with vanilla, the rest, was pretty much the same, method is also the same. But because this recipe contains less flour, it has the tendency to puff before it even browns. I did this twice and the 2nd time around, I tried not to incorporate too much air in, but it still became a balloon. Nevermind, as long as the taste is good, who cares if its got wrinkly skin.

Actually I quite like it. Will try a blueberry version, but that will not be a clafoutis. 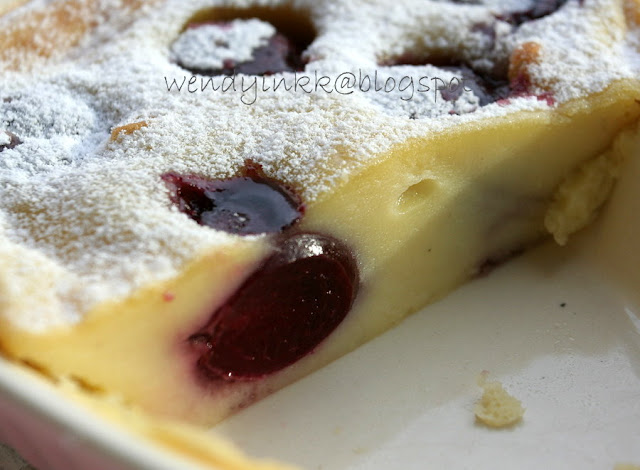