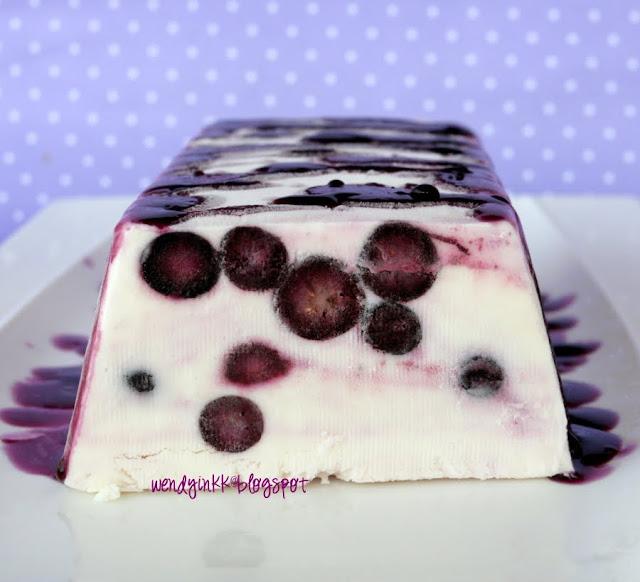 You don’t need a ice cream maker for this. Just a hand held mixer or if you don’t own one, just work harder with your whisk.

The original recipe called for Greek yogurt. Yeah, that’s pretty much Greek to me, as that is not available here. So, I substituted it with low fat yogurt and whipping cream to make up for the creaminess that Greek yogurt is supposed to have. And I used gelatin in place of eggs as emulsifiers because I don’t want to cook the yogurt. I’m pretty much scared of breaking up the curds. They don’t stay as creamy yogurt when overheated, you know. I’ve seen somewhere that gelatin can be used to make ice cream to produce that creamy feeling without using eggs.

And with blueberries being super expensive here, I skipped the garnish portion, and used up the berries for the filling, leaving the syrup behind for garnish. I just had to improvise to lower the cost.

Although the yogurt content here seemed low, but no, I let Lydia lick the bowl and she told me it’s yogurt. If kids can tell, I’m sure you can. 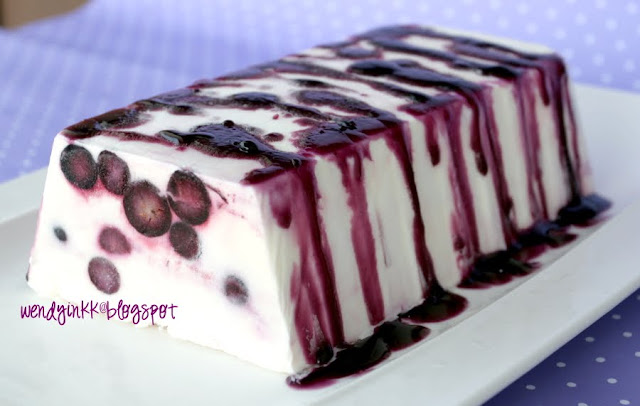 (A)
100gm blueberries
2 Tbsp water
1 Tbsp sugar
Cook these in a saucepan over medium low heat until you can see the water turning into a blue colour. Do not stir, only swirl the pan with the handle. Remove from heat. Let it cool.

(B)
1tsp gelatin
2 Tbsp water
Place water in a microwave safe or heatproof bowl. Sprinkle gelatin over water. Let it sit for 5 minutes.
Either microwave on high for 20 seconds or double boil until gelatin melts. Set aside to cool.

1. Chill mixing bowl in the freezer for 5 minutes.
2. Remove from freezer and pour in cold whipping cream.
3. Beat on low for 1 minute then raise the speed gradually to high and whip until it is almost soft peaks. Put in sugar gradually and whip until soft peaks.
4. With the mixer on, pour in the cooled gelatin mixture (B) and mix until incorporated.
5. With a spatula or spoon, mix in the yogurt. Mix well.
6. Put only the blueberries (A) into the ice cream mixture. Leave the syrup behind and keep it chilled until time of use.
7. Fold the ice cream twice, not too much, you want the ripple effect. Take care not to break the blueberries.
8. Pour ice cream into a 1L capacity loaf tin. (I used a disposable 4cup/1L capacity loaf pan) Freeze until hardened.
9. When it’s almost time to serve, sprinkle 1/3 tsp of gelatin into reserved blueberry syrup and let it sit for 5 minutes. Microwave on high for 20 seconds. Let it cool down.
10. Unmould ice cream onto a chilled serving platter. Drizzle blueberry syrup over ice cream loaf.
11. Slice ice cream to serve. Do not use a scoop. 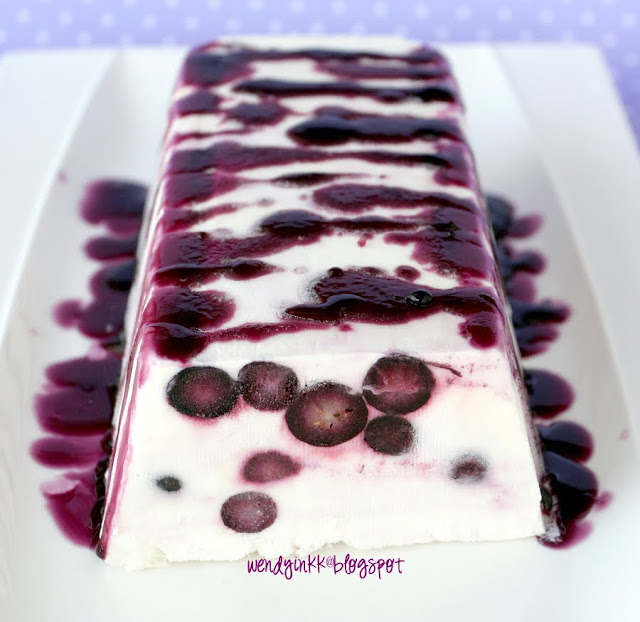 Taking pictures with ice cream is really tricky. I was a bit slow.. and no, it didn't melt, but it froze the blueberry jelly I drizzled on top. 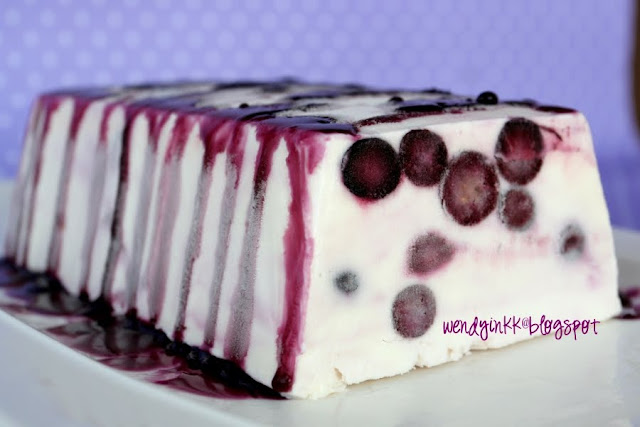