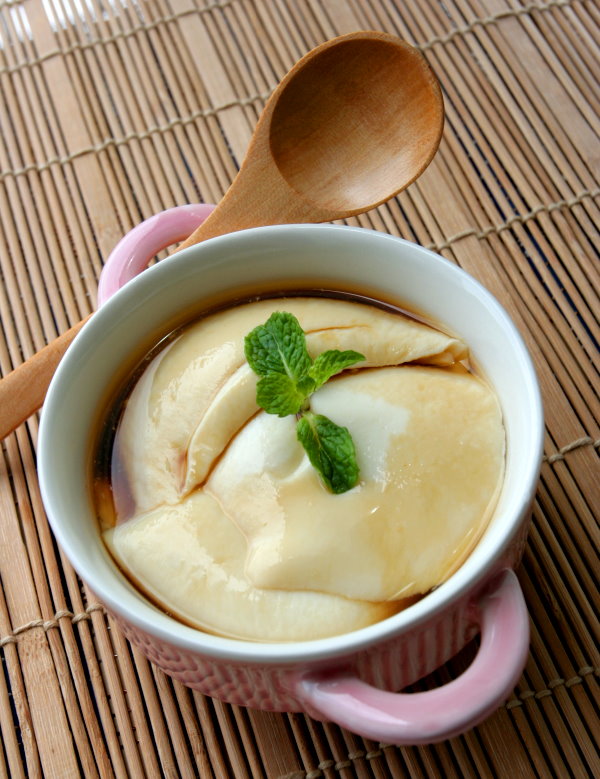 Tofufah or Taufufar is soft beancurd in syrup. A traditional Chinese dessert. Some like it hot, some like it cold. Some like the syrup spiced with ginger, and being typical Malaysians, we like it flavoured with pandan (screwpine) or with gula melaka (palm sugar) instead of regular white sugar. It used to be the cheapest dessert ever at ony 20sen per bowl when I was a kid, and in just 20 years, the price has gone 5 fold, at least, depending on where you buy it.

The traditional way is to make it using gypsum, a natural mineral from the earth. But due to so many people saying it's bad for health, well, so, I tried making this with GDL.

I finally made tofufah with GDL and they all ended up in the drain…. Why? Cos they all were all curdled. Like vomit. Disgusting? Yes. Well, before I embarked on this brave experiment, I searched on the internet for % of GDL for making soft tofu,and I found that it should be 0.3%, well, 3L of it with 2tsp, it’s about that gua..but no…. it failed. 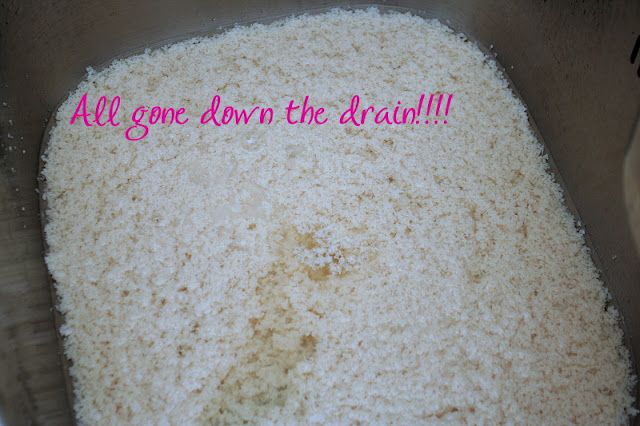 For those of you who have no idea of what GDL is, GDL is short for Glucono Delta Lactone. Glucono delta-lactone (GDL) is a naturally-occurring food additive used as a sequestrant, an acidifier, or a curing, pickling, or leavening agent. It is a lactone (cyclic ester) of D-gluconic acid. Pure GDL is a white odorless crystalline powder. GDL is commonly found in honey, fruit juices, and wine. GDL is neutral, but hydrolyses in water to gluconic acid which is acidic, adding a tangy taste to foods, though it has roughly a third of the sourness of citric acid. It is now commonly used in commercial tofus found in supermarkets with brands like Cheong Fatt. You can try to see that the next time you go shopping. It is considered safer than gypsum (sek koh) 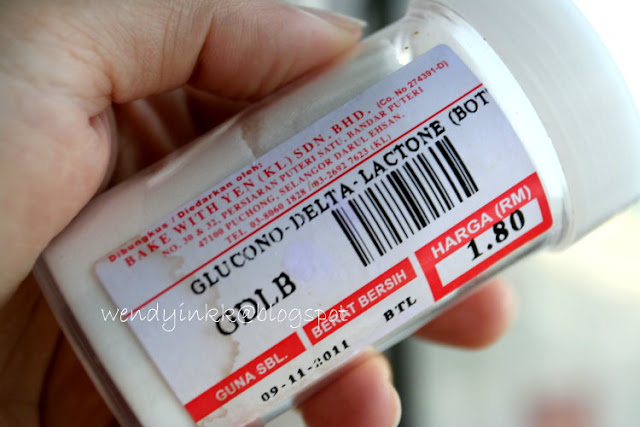 There isn’t a site in English that I can refer when it comes to making tofufah with GDL… not even one. Even in Chinese, there is only one. This one. I only found her after I failed. Well, she also failed like I did, all like vomit,. Later I found another post on her blog….. SHE SUCCEEDED!!!! Oh gosh!! Now this is good news. Then she found out the reason, her soy milk is too diluted. Cos she did her soy milk with her soy machine. Well, I did mine rather diluted too, 200gm beans with 3L water. That’s why I failed, and had vomit curds like hers. Now, with her successful recipe, I’m going to embark on this grey area on the internet, where not many have trod… tofufah with GDL again. 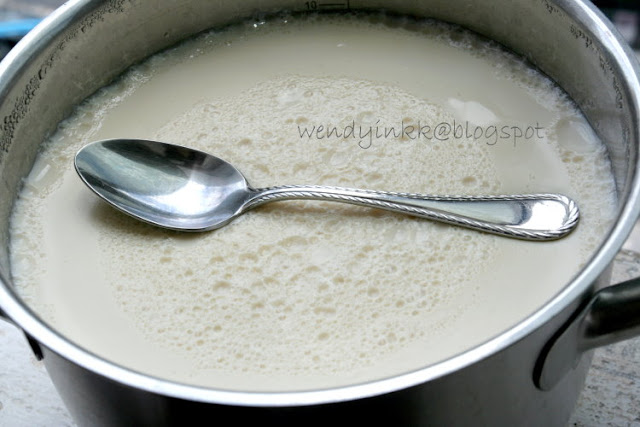 And was I successful? Yes I am!! Not once but twice. The pictures on this post are from my 2nd successful attempt.
And below is my translation of her recipe.

1. Soak beans overnight or at least 8 hours
2. Blend beans in a blender with 1.8L water (maybe done in 3 times)
3. Press out soy milk with a cheesecloth
4. Measure 2L of soy milk and bring a boil with pandan knot.
5. In another pot, mix GDL with cornstarch and water.
6. When milk has come to a boil, leave it to cool down, lid off for 5 minutes or until 90C.
7. Pour soy milk in a gushing motion(2-3 feet above) into pot with GDL mixture.
8. Do not move pot, wrap lid with a towel and leave tofufah to set for 1 hour.
9. With a tofufah spatula or a wok spatula, gently skim layers of tofufah onto serving bowl. Top with syrup of choice just before eating. Serve warm or chilled. 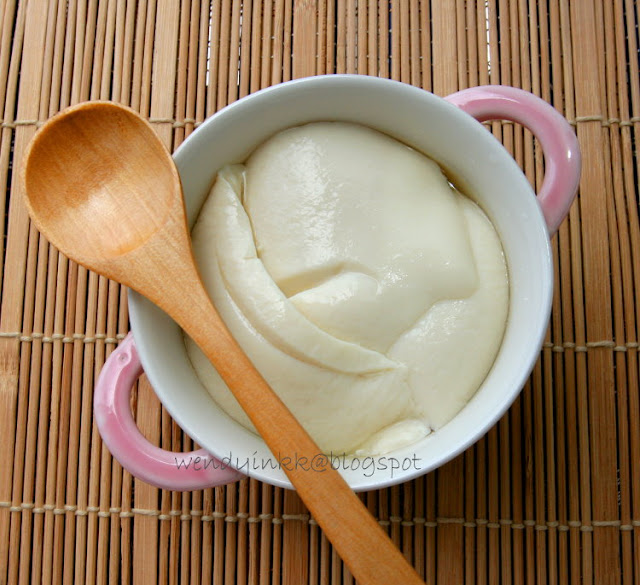 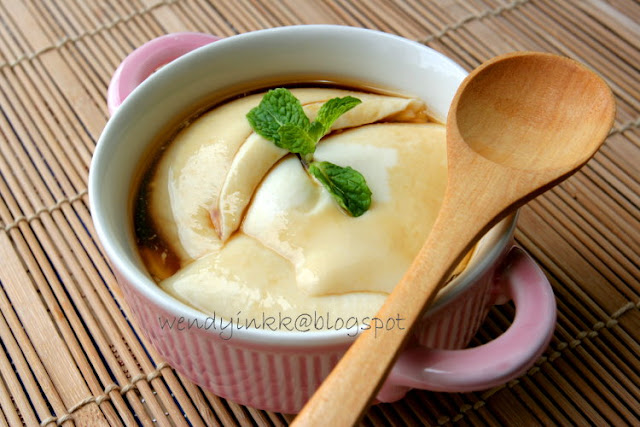 Now, before you go, I need some help.
I am currently wanting to buy a built in oven for my new kitchen.
I am torn between a Bosch (I have 2 models in mind, with a difference of RM1.3k between the 2 models) and Teka,
with both being German. Both grade A for power consumption.

Service Team:
Bosch: None in Ipoh. But so far, response from their customer service has been good. They always call me promptly whenever I send them an email.
Teka: Service team available in Ipoh that gives tutorial upon delivery and for repairs

Cleaning:
Bosch: Self Cleaning
Teka: None

I can find loads of info online on Bosch ovens , but none for Teka, except for their own sites.

Can anyone tell me their experience with using Teka ovens, especially on the heating part. Even? Does it need turning the pan around, esp for cookies?  And does the double glazed doors feel hot to touch? Sometimes I just don't want to fully believe those salesman.

I find it weird to have a German brand (Teka) with not much information and reviews from the internet. Not that the model numbers differ (Bosch's models differs). The model that I aimed is featured in their main website (not Malaysian) and I can't seem to find information on the model, which made me really wary of their brand.
Posted by WendyinKK at 10:46 AM