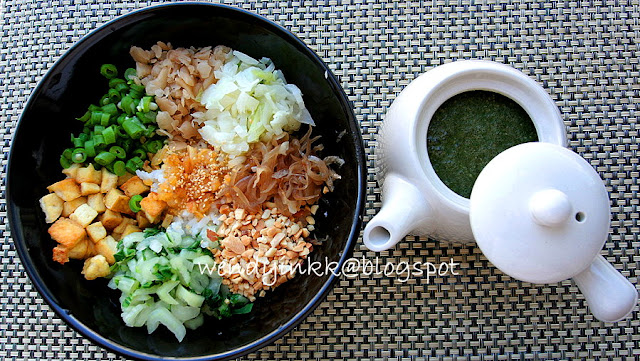 Healthy!!!! This is healthy food. Loaded with loads of greens and drenched in green soup too. How much greener can you get?

Hakka Thunder Tea rice or Hakka Lui Cha, is a traditional fare among the Hor Poh clan which is part of the Hakkas. But it’s no longer confined to those of that clan, but anyone, everyone who loves to eat lots of green and adores aromatic herbs like mint and basil. 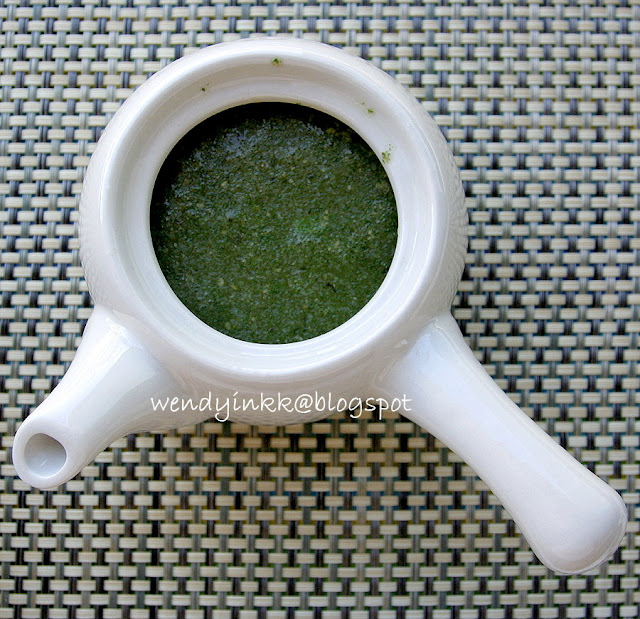 I’ve never planned to make or even try this, but suddenly I just felt like making it with basil and mint already on hand, what was I waiting for? I only needed the wait for the next day to make this for lunch for everybody at Mike’s shop. It was past dinner time when I thought of it.

Currently one bowl of this can be anywhere between RM3-RM8, depending on where you eat this.
Making this yourself is a lot cheaper and you can have as much tea soup as you like : )

You may think that preparing this is tedious. But actually after trying this, it’s not too hard. One hour was all I took. But you must really go according to sequence to save work on washing and waiting.
One pot
One pan
One blender
Was all that I used, with no washing in between. So, it’s not that tedious, but you have to prepare quite a few bowls or plates to separate the condiments. 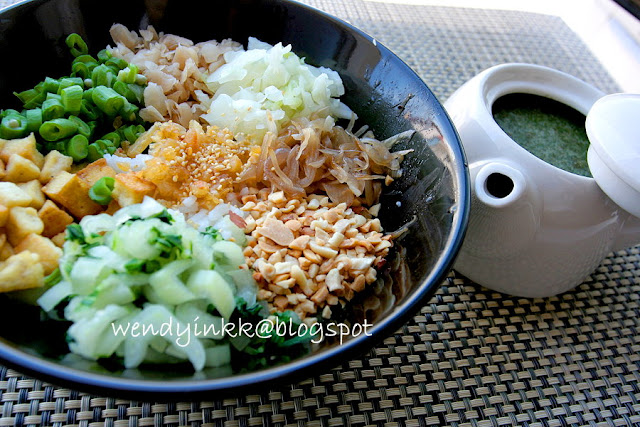 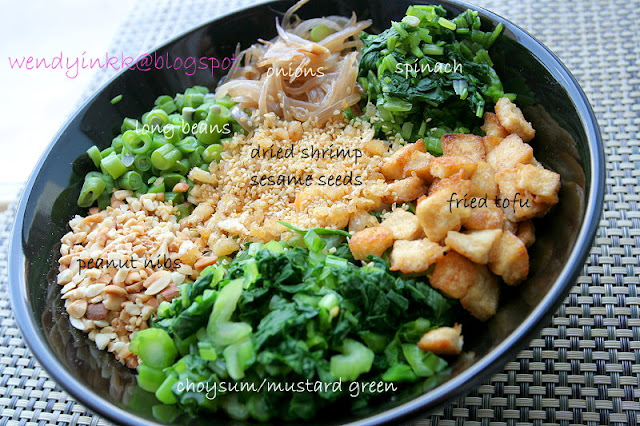 Tea soup paste
1 handful of Thai basil 九程塔, leaves only (before trimming from stalks was 45gm)
1 handful of mint (applemint, 香花菜, leaves only (amount about the same as basil)
3 Tbsp roasted peanuts
1 Tbsp toasted sesame seeds (amount taken from above)
1 green tea bag (snipped open for the tea dust/leaves)
½ tsp salt, more if you like it saltier
1 anchovy soup cube (replace with vegetarian seasoning if vegetarian)
½ cup drinkable plain water (or the water squeezed from the blanched, cut, veggies) 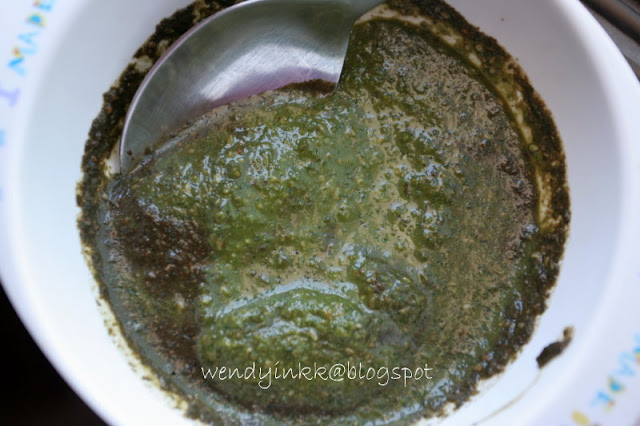 Method
1. First, cook your rice, prepare only 70% of what you would normally eat.
2. Soak the preserved radish and dried shrimp in water, separately.
3. Bring a pot of water to boil, it should be enough for blanching the vegetables.
4. Meanwhile, cube the tofu, slice the onions/leeks. Rinse the vege, leave them whole.
5. When the water has come to a boil, blanch the vege separately. Long beans for 30 seconds, choysum/bakchoy/kalian for 30 seconds, Spinach until just wilted, cabbage for 1-2 minutes. Drain all vege and leave to cool down.
6. Now, squeeze dry the preserved radish and the soaked shrimps. Coarsely chop the shrimps.
7. Prepare a pan. Put sesame seeds in and put on medium low heat. Gently toast them until slightly golden, or sometimes they may start jumping (some don’t jump, but will just turn golden). Remove and set aside.
8. Put in 2 tbsp of oil and pan fry half the tofu cubes until golden. Drain and dish up. Repeat with the other half of tofu.
9. With oil remaining in pan, turn heat to high, let pan heat up and put in sliced onions/leeks and cook for 30 seconds and turn to medium heat and cook until soft and translucent. (The initial high heat is needed to give the onions a nice aroma). Lightly season with some salt. Remove onions/leeks and put in a bowl/plate
10. With the same pan, if there is still some oil (1tsp), if there is none , then add some oil in, then fry the dried shrimps until golden. Dish up.
11. Put in preserved radish and cook for 1 minute until it turns hot. Dish up.
12. Now, slice all the vegetables thinly and keep them aside. Squeeze excess water out fom leafy vege. (You can retain the squeezed out juice for blending the paste)Do not mix them together.

To prepare tea soup paste
1. Put everything in to a blender and whizz until fine.
2. Put into a bowl.

Assembly
1. Place rice in center or bowl (I only fill 70% of my normal portion)
2. Divide all condiments into 5 portions and arrange condiments onto rice.
3. Put 2 Tbsp of tea soup paste into another rice bowl. Pour 1 cup boiling water onto paste and let it infuse for 1 minute.
4. You can either consume the rice and soup separately or pour the soup onto the rice. 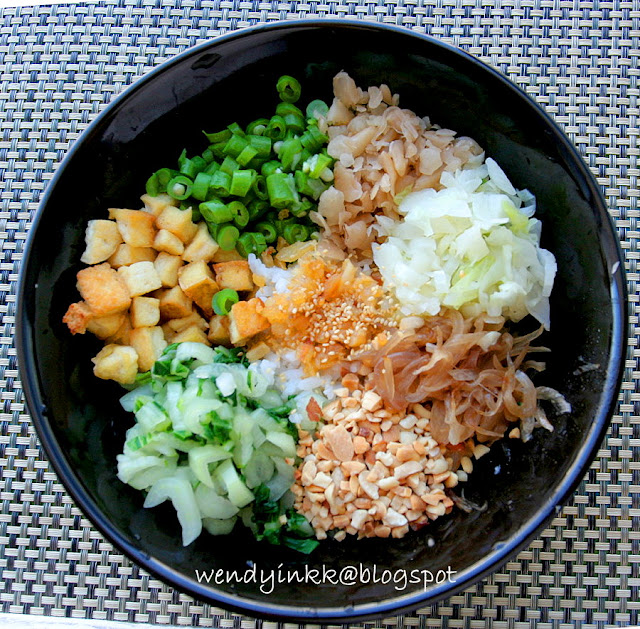 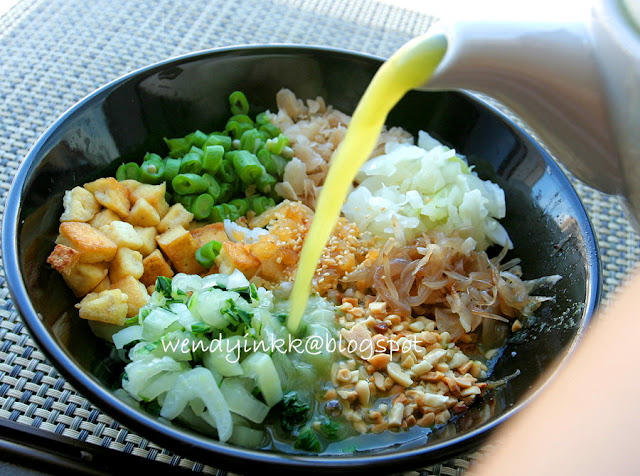 I wonder if you realised that the bowls of rice actually looked different. I actually made this rice twice before posting, with different veggie each time. I super love this and the man super hates this, ahahhaha!!!  I had to cook him fried rice with all the leftovers of condiments after placing out all the portions.

Pics from my 2nd attempt: 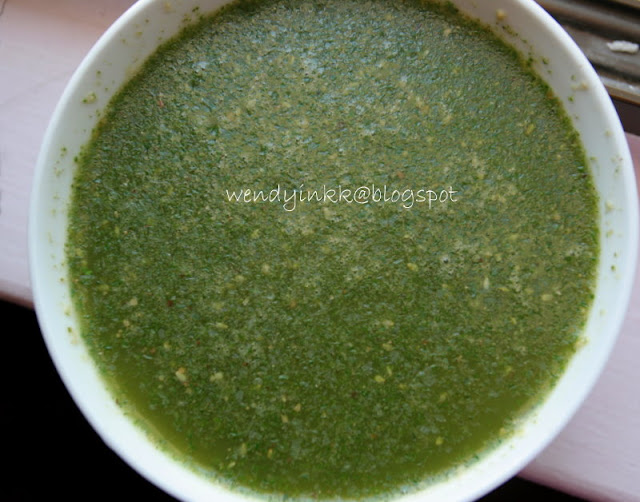 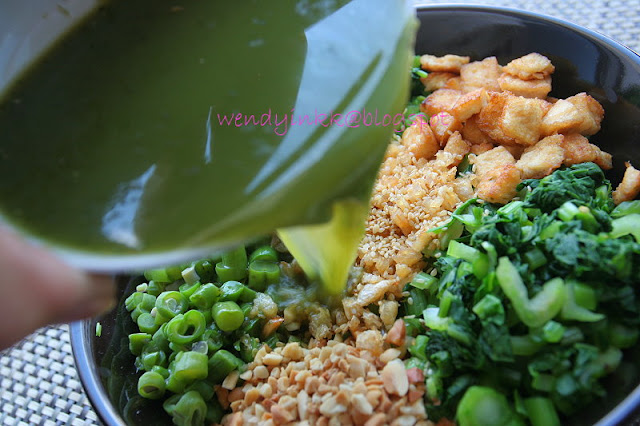