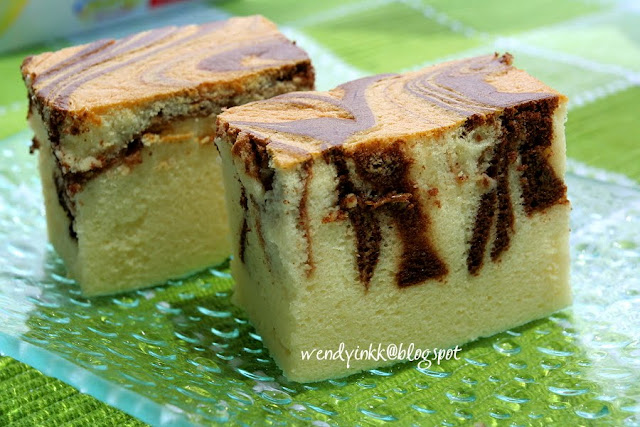 This cake really lives up to its name. Feather light :)

Another recipe from Alex Goh from his ‘Fantastic Cheesecake’ cookbook. I think I’ve made the most stuff out of this book.

Hannah the picky eater ate 4 slices of this at one go. She keeps on telling me it’s so good. And Joanna wants this cake as her birthday cake (The inside of course, outside she wants it all pink).

This cake is on the moist side. You can see why… the amount of liquid used is a lot. Actually I jacked up the whole recipe by another 25% because I had 160gm of cream cheese in the fridge and have a 9 inch square instead of a 8 inch. One mistake that I did was to retain the baking time which in the end could’ve made the cake slightly wetter than it should be because I had trouble slicing the cake. Or maybe I should’nt have jack up the milk by the same ratio of 25%. Nevermind, I don’t think this will be a one off cake. I’ll definitely make this again… for Joanna’s birthday. And she wants it heart shaped and pink. Here’s another reason to get a new pan. 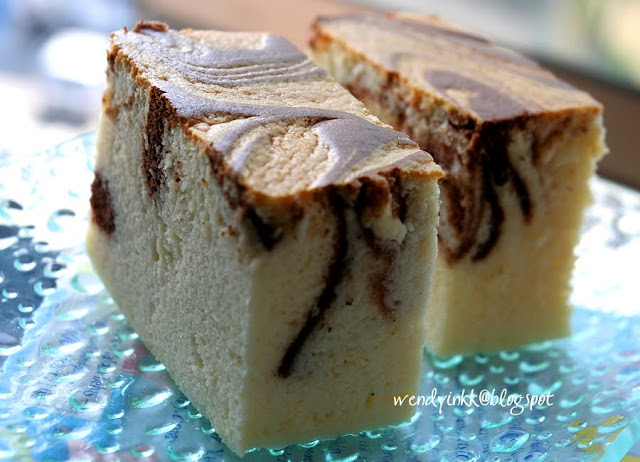 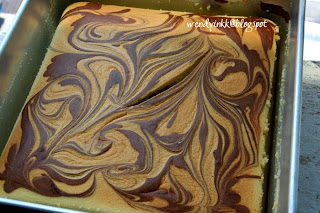 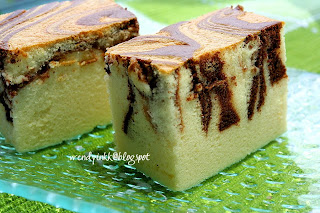 1. Line the base of a 8 inch square pan and preheat the oven at 150/160C.
2. In a medium sized bowl, cream cream cheese until smooth.
3. Bring milk and butter to a boil and pour ¼ of it into cream cheese and gently stir until incorporated. Pour in another ¼ the milk and stir again. Lastly pour in all the milk and stir until smooth. (At this point, prepare some boiling water)
4. Let the cheese mixture cool down and put in flour. Mix until smooth. Then put in egg yolks and vanilla. Mix until smooth.
5. In another clean bowl, beat egg whites until frothy. Put in salt and cream of tartar and beat until soft peaks. Put in sugar gradually and beat until stiff.
6. Put 1/3 of egg whites into cheese mixture and fold gently but quickly.
7. Pour the cheese mixture into the egg whites and fold until well incorporated.
8. Mix cocoa powder with boiling water until smooth. Put in a few tablespoons of the cheese batter and mix until a smooth chocolatey batter is formed.
9. Pour main cheese batter into prepared pan. Drizzle chocolate batter over main cheese batter.
10. Use a knife and cut through the batter to create a marbling effect.
11. Put pan into slightly bigger but shallower pan. Fill the bigger pan with boiling water until halfway up and bake for 50-60 minutes.
12. When cake is baked, remove from oven and release the sides of the cake from the pan immediately by running a knife between the sides of the cake and the pan. Cake will shrink tremendously but evenly. Leave it to cool down totally and chill until cold before cutting.

Please note that this cake is very fragile and must be handled very gently with much care. 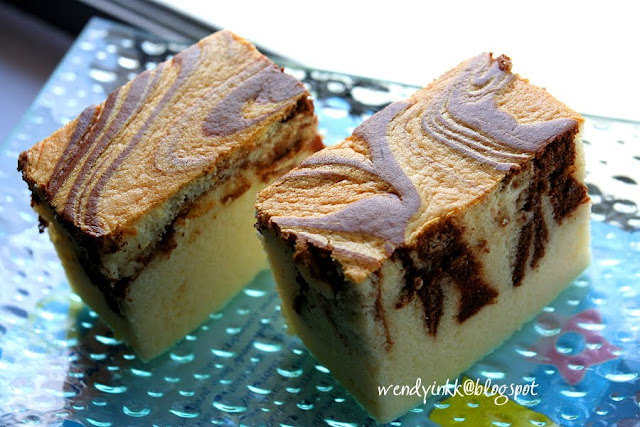