A shortweekend and a long meeting

I was away last weekend, you all knew right??? Because I didn't post anything on Friday and Saturday.

Just went to KL to spend the weekend and do some shopping. I bet those of you who read Swee San's blog already knew I met up with her and Pei Lin.

On this trip, I didn't do any clothes shopping, but mostly for my blog. Bought a heck lot of flours; buckwheat, kamut, spelt, millet, cornflour(not starch, it's finely milled cornmeal), wholemeal bread flour (not regular wholemeal flour), balsamic vinegar and grapeseed oil. 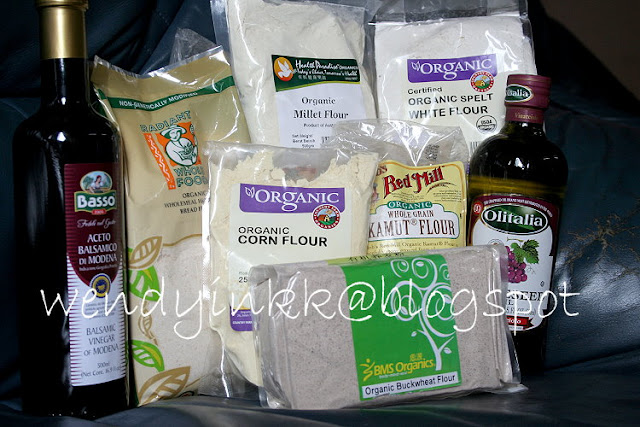 Don't worry, my blog isn't going to turn organic or into something else that you find "alien" with all these funny ingredients. I only planned to buy kamut flour on this trip. Just so happened that I saw the rest, and got curious on how they taste like. I'll gladly buy any flour that is not certified organic because organic products are pricey, but sadly I could only get them at organic counters. But for those of you who would like to know, after scouting a few places during the weekend, I found that the cheapest spot for white spelt flour and other flours will be BMS Organics(one branch in Ipoh), cheapest Bob Red Mills flours will be Jaya Grocer and Just Life (Mercato and Cold Storage is expensive), best selection of flours will be Jaya Grocer. If you want to know the location of the outlets, please google for them. I'll link them here if they $$$ me, hahahahah!!!!

And I also found something at Jaya Grocer that Pei-Lin had been looking for ever since she came back to Malaysia. I wanted to called her immediately, so that I can make her scream, but then I chose to SMS her and let her scream on her own. You'll see that later in my blog or even Swee San's blog, cos when I told Pei-Lin about it, Pei-Lin told Swee San about it and Swee San quickly went to grab some for herself. Grab first, think later!!! Hahahaa!!! 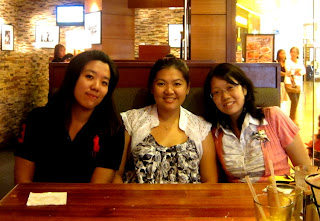 Now, about my meeting with these 2 ladies. I'm meeting Swee San for the 3rd time and Pei-Lin the second time. The 'date" was on Sept 11, 11am at the Curve as usual. Went Daiso to buy stuff for our blogs and me being the naughty one was trying to "sabo" Pei-Lin to buy this buy that. Hahaha.
She really did buy quite a bunch, but not due to my magic. I just bought a few items.
Then we went to have lunch at Tony Roma's. Yakking non stop while eating.
After that we went shopping again, for ingredients.
Went Cold Storage and Just Life, and Pei-Lin needed to go to Ikea to grab some stuff. Then my dear Mike called, telling me to have dinner on my own. Then my dear blogging buddies accompanied me for dinner. So so nice of them. Poor Pei-Lin arrived home at 11.10pm. The meeting was more than 10 hours. Crazy!! 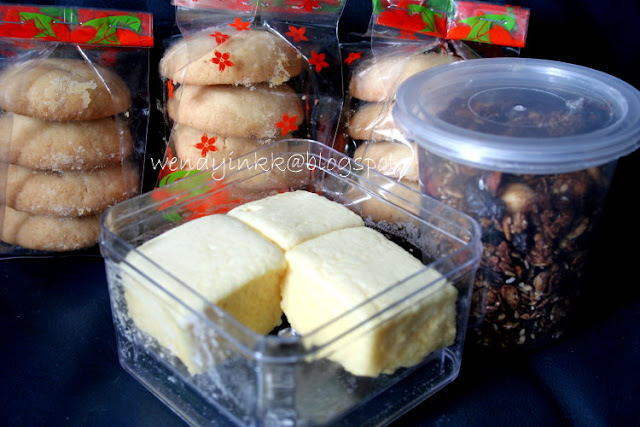 So, what are these? The squarish stuff were from Swee San, and they are passion fruit marshmallows. Homemade ones taste so so super compared to store bought ones, and not as sweet too. It's very very soft but smell a bit eggy. Cos it's got egg whites, and store bought ones are just sugar and gelatin. Nothing beats home made stuff.  And Pei-Lin made some coconut cookies and chocolate granola for us. She gave me 4 packs of cookies, Mike, my 2 girls and me, so 4. You can only see 3 here, cos we already ate 1 pack while in the car. Really yummy and taste like Kjeldsens coconut currant cookies, if only there were currants.
I can't wait for them to post up the recipes!!!!!!

When we arrived home on Sunday night... it was tiring, but it was a really fun weekend.

By now, we are already planning for the next meeting, and the venue is already confirmed at Empire Shopping Gallery. Simply because of the selection of ingredients that we can get there and our next adventure will be to try out as many breads as possible from "The loaf". I've seen a palm sized bread there going to about RM22, about that. Wondering how nice will the super expensive palm size loaf taste like.
Leave that to our next meeting.
Posted by WendyinKK at 10:58 AM