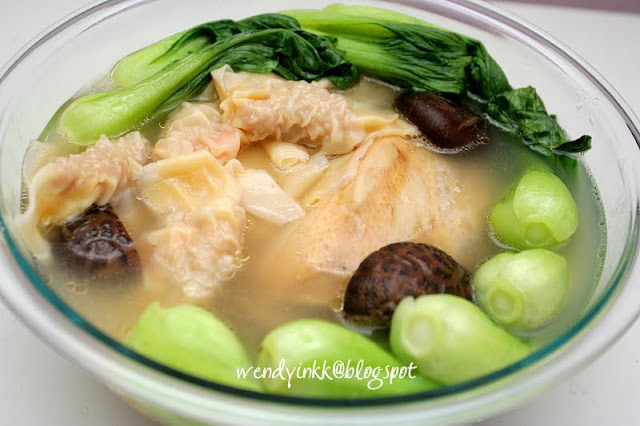 A recreation of what I've tasted at a few restaurants.

Some put in canned chicken broth, some use the real chicken broth. Of course, those with added canned broth taste absolutely fabulous. Well if not, how can their soup taste so fabulous and it's something that home cooked stuff can never achieve, unless of course, you put the same stuff it. But how many of us wants to eat the same way that restaurants cook? Add the same additives and flavourings? I'm one of those that prefers none or if I can't avoid it, minimal.

You may add in a can of broth if you like, if the chicken is pretty tasteless. Well, what happen to all the chickens nowadays? Malnourished? They are really pretty tasteless, but I could bear with it. Or use MSG.
But I use the way Grandaunt taught me to. Sugar. Sugar is a flavour enhancer in soups. Used sparingly and it could bring out the sweetness of the broth, without being obviously sweet, and definately without the after thirst. Once I made a soup using those caterpillar roots that are sold in Camerons, and I added one tablespoon of sugar to the pot of soup. My elder brother kept on praising how nice the soup was, how sweet those caterpillar roots were, and that I could've made more soup out of it. I was laughing my heart out and told him, it's sugar!!!!! Actually the reason why candied dates are added in soups is also due to the sugar and that add sweetness to the soup. 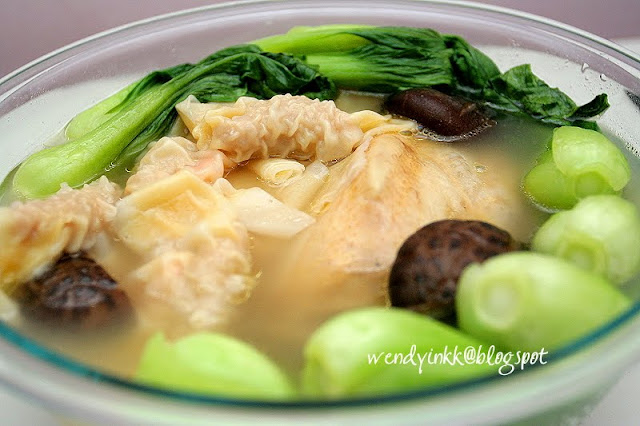 70gm kampong chicken or free range chicken
2 dried scallops/conpoy , 1 iinch diameter big
2 mushrooms
2.5L water
1 tsp Salt, and ½ tsp sugar if you feel something is missing after u taste it 
Bring water to a boil and put in chicken, scallops and mushrooms. Let it simmer for 1 hour 30 minutes. Season with salt and sugar. 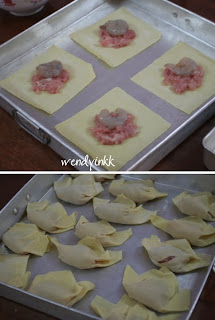 1. Mix pork, salt, sugar, water , cornstarch and pepper together.
2. Place 1 tsp pork mixture onto wanton skin. Place 1 piece of prawn onto pork.
3. Lightly brush sides of wanton with water. Fold and seal wanton. Repeat until finish.
4. (do this only when you are about to serve) Bring a pot of water to boil put in wantons. When it floats, scoop it out.
5. Put the cooked wantons into the boiling chicken broth.
6. Put vegetables into the same pot (after cooking the wantons in step 4) and boil for 30 seconds.
7. Remove veggie from pot. Put veggie into broth.
8. Serve hot. 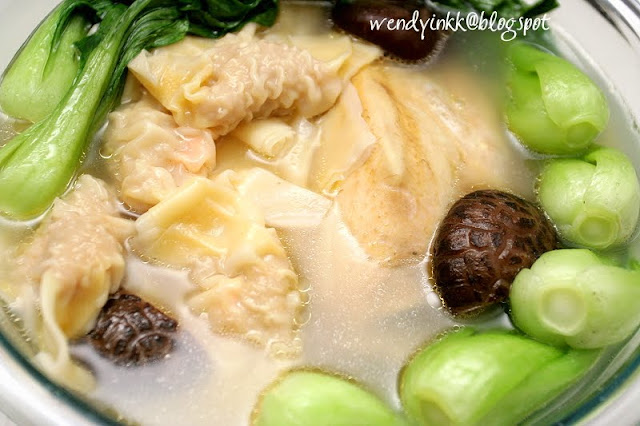