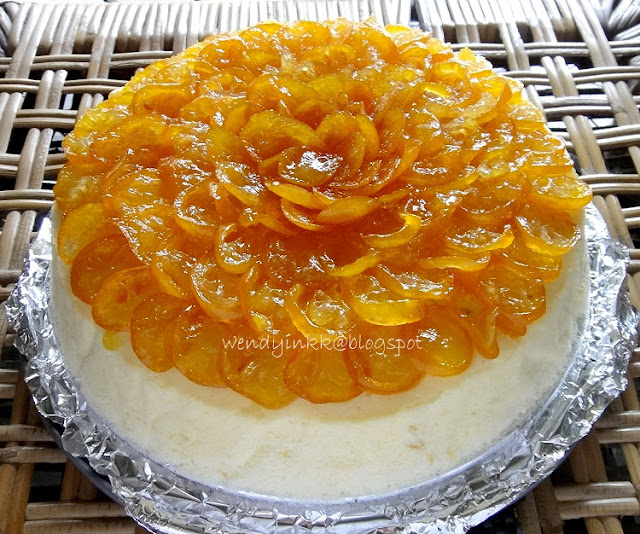 When I saw this cheesecake on Zurin's blog long ago, I fell in love with the kumquat crown. It looked so pretty. When I saw kumquats in Ipoh's Jusco, I had to get my hands on some. It's not expensive, at less than RM4 per punnet.

I didn't want to do a rich rich cheesecake that'll take up few blocks of cream cheese. I always prefer light creamy cheesecakes. No, this is not as light as featherlight cheesecake or Japanese Cotton Cheesecake. This is still creamy but not that, that rich. I want to eat cake, not lick on cream cheese. And I also have little bit of cream left from my pineapple tarts and Minnie Cakes (not sure when I'll be posting them, as I'm going themed now), and a opened can of condensed milk. Might as well utilize them.

Well, yeah, this is another dump in cake. Hey, I don't simply dump in things. I do calculations in my brain before I dump them in. How much aeration I want, how sweet and milky I want the cake to be, how firm I want it. I never just throw things in before giving it a second thought. Never. Ingredients are too expensive to be wasted. 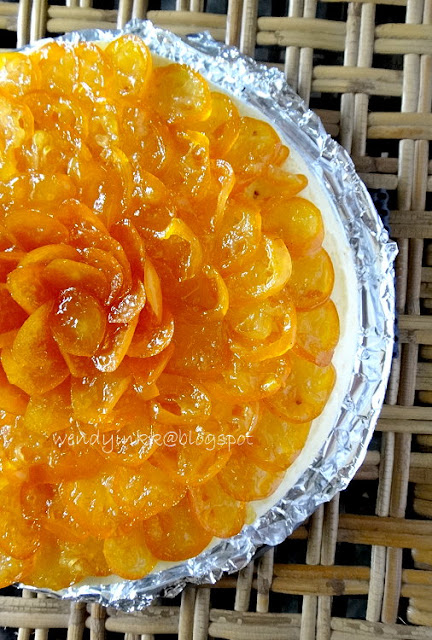 Kumquats are a nice fruit to be incorporated into CNY.
So, if you ask me, Is this fruit common?

Well, when I was a kid, my neighbour bought two kumquat trees for CNY, and I asked him , why is the lime so funny, it's oblong rather than round. He said, oh, it's a new variety. Darn, he doesn't know it's a Kumquat 金橘. So, I bet most of you have seen this somewhere in someone's home, or even your own home, but have no idea, this is the kumquat that I'm talking about. It's a longish oblong lime lookalike that has no flesh. The fruit can be eaten whole. Just pop it into your mouth and chew away.

So, who were the eaters of this cake. Don't ask Mike. He didn't even catch a glimpse of this cake. I made this for my friends, that I met up on Day 4 of CNY. They cleaned up the pan very quickly. I never knew kumquat compote tasted so good. I used less sugar than found in online recipes because I found my kumquats to be on the sweet side, rather than being tart. I'm not going to keep the compote at room temperature for ages, so, why use so much sugar? Now with this ratio that I formulated for sweet kumquats, it's just nice for me. Like a light marmalade. The cake may be sweet on first bite due to the compote, but as you go on, it'll be fine. No one complained, but asked for seconds 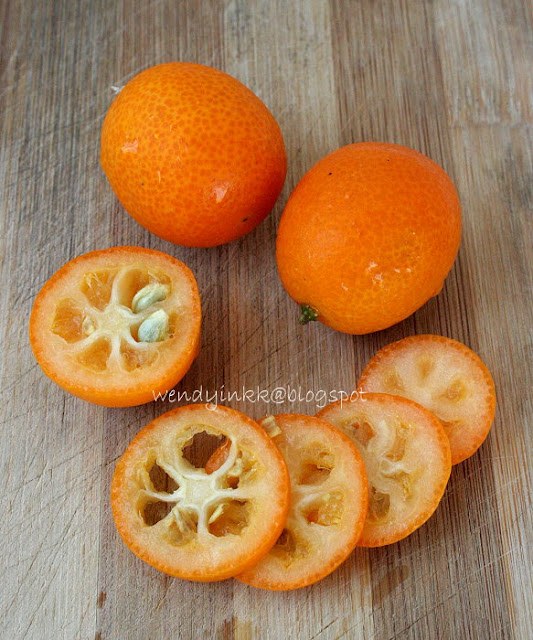 1. Prepare and line a springform pan. Wrap pan with aluminium foil to prevent water from seeping into the baking pan. Refer here if not sure how. Prepare a pot of boiling water. Place pan into a slightly larger pan. Preheat oven to 130C(fan)/150C
2. Sift cornstarch and flour and set aside.
3. Mix orange juice and egg yolks, lightly beat for a while and set aside.
4. With a whisk or large spoon, beat cream cheese until smooth and put in condensed milk and mix until smooth. Put in whipping cream and beat until smooth. Put in egg and beat until smooth. Put in sifted flour and mix until smooth. Put in orange juice mixture and and zest and mix until smooth.
5. Beat egg whites until frothy. Put n cream of tartar and beat until soft peaks. Put in sugar gradually and beat until stiff, and the peaks are softly hooked when whisk is turned upright.
6. Fold half of the beaten egg whites into the cheese mixture. Repeat with balance of whites.
7. Pour batter into prepared pan and put the whole set of prepared pans into the oven. Pour boiling water into the outer pan until it’s at least 1/3 the height of the inner pan.
8. Bake for 1 hour. Cool cake in oven (door ajar) for half an hour. Remove cake from oven and cool down totally. Chill in fridge for 5 hours before serving. With a skewer/toothpick, poke cake to create at least 30 holes absorb the syrup from the compote.

1. Slice kumquats about 3mm thick. Remove all the seeds
2. Place all the prepared kumquats into a saucepan and put in water and sugar.
3. Cook on medium low heat until all the kumquats turn translucent. If it's too dry, add a bit more water.
4. Arrange warm kumquat slices over cheesecake and brush remaining syrup over kumquat slices. 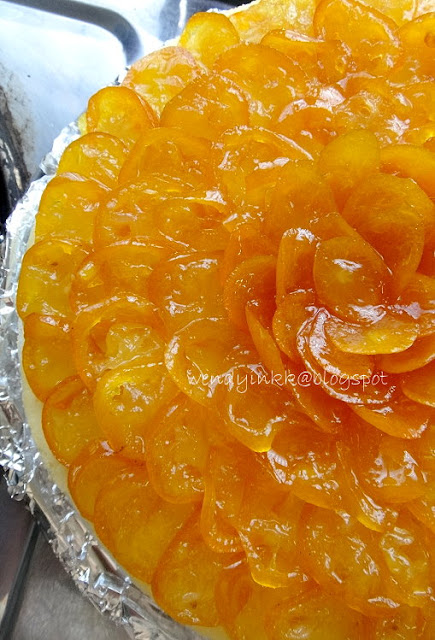 Pictures of cheesecake taken with my Sony Ericsson TX5, not as good as usual, right?
Posted by WendyinKK at 11:01 AM