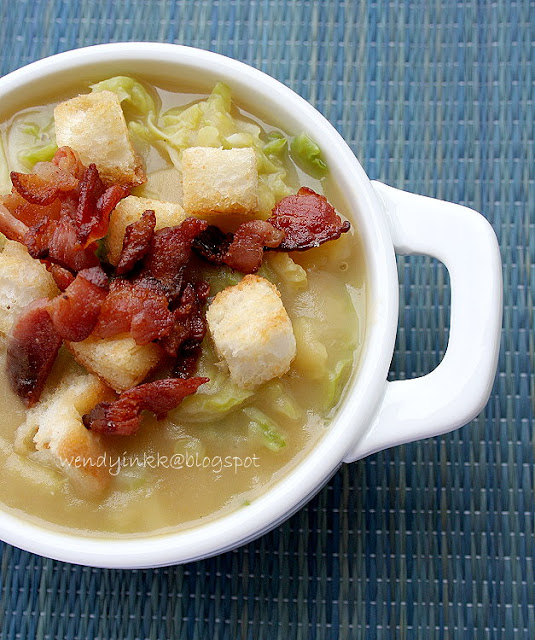 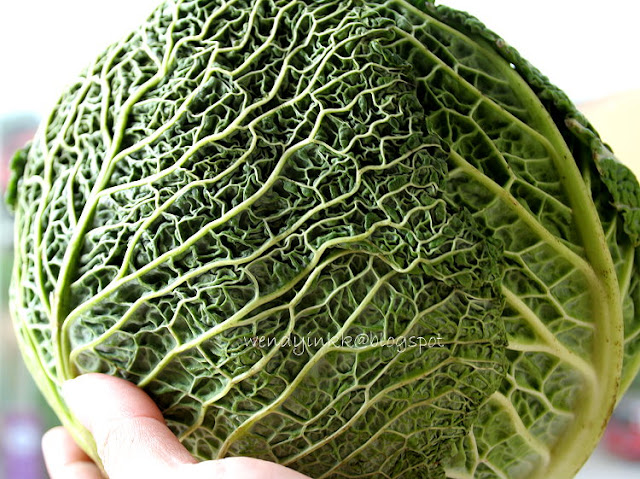 I bought this half head of savoy cabbage at Jaya Grocer and I had no idea what to do with it. As always whenever I see something new, I just buy it first, think later.

Savoy cabbages look very pretty, with lacy leaves and it comes nicely green unlike the regular cabbages. Since I’ve never eaten savoy cabbages before, I had no idea how it taste like. So, I better google for a recipe. I don’t want stir fries or salads. Nor do I want to do meat rolls with it, since it’s only a half head, the leaves will not be suitable. Then I saw a recipe on BBC Good Food, savoy cabbage soup with potatoes, sounds yummy and topped with crispy bacon!!! 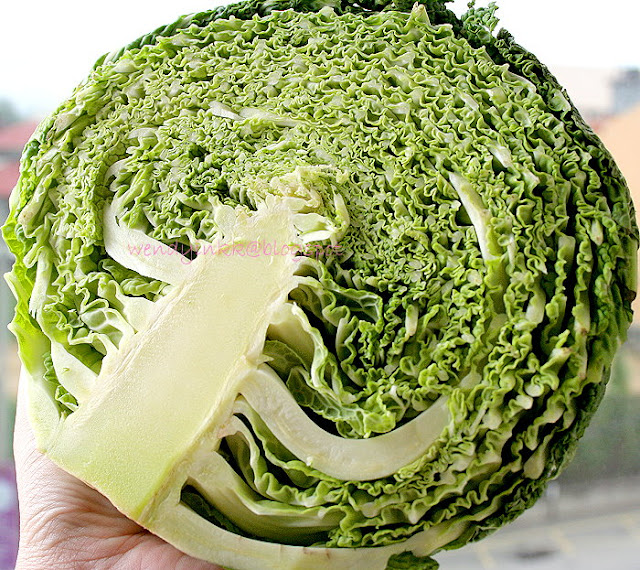 Here’s my first attempt, cooking with savoy cabbage.
If you’re thinking of serving this as a side dish, maybe you’d like to think twice. It’s so hearty that it can be a meal on its own. This portion is enough to feed 4 adults.

1. Peel and thinly slice leeks, onions, potatoes and carrots
2. Heat up a pot and put in olive oil. Put in onions and leeks and cook until it softens and takes on a little bit of goldenness.
3. Put in sliced potatoes and carrots, stir and put in 8 cups of water.
4. Let it simmer for 15 minutes or until carrots are tender. Season with salt or throw in a chicken bouillon cube or 2.
5. Let it cool down for a while and whizz with a immersion blender until fine and smooth. (if using a regular blender, please leave it to cool down until slightly warm.
6. While waiting, prepare your croutons. Cube French loaf and heat a pan. Put in some butter and when it has melted, put in your cubed bread and toss it around to coat well. Put in more butter if you find it not sufficient. Slowly toast them on your pan until very golden and crispy.
7. Prepare bacon chips by frying in a little bit of oilon medium low heat until golden and crispy, dish up and drain off the oil on absorbent papers.
8. When it’s almost time to serve, reboil soup and put in sliced savoy cabbage and simmer for 5 minutes.
9. Ladle soup into bowl and top with crispy bacon chips and croutons.


Verdict:
Gosh , this soup is very delicious. Do not be fooled by how it looks, yellow and dirty looking. The bacon can be skipped, but don’t forget the croutons. Maybe I’m used to drinking western soups laced with loads of cream and when this one doesn’t, the butter from the croutons adds the “milky” smell that I will usually relate with western soups. My hubby and kids loved this and all were full from just having the soup. 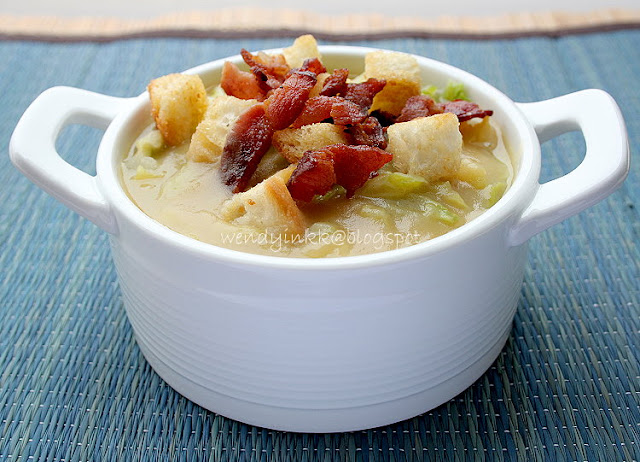