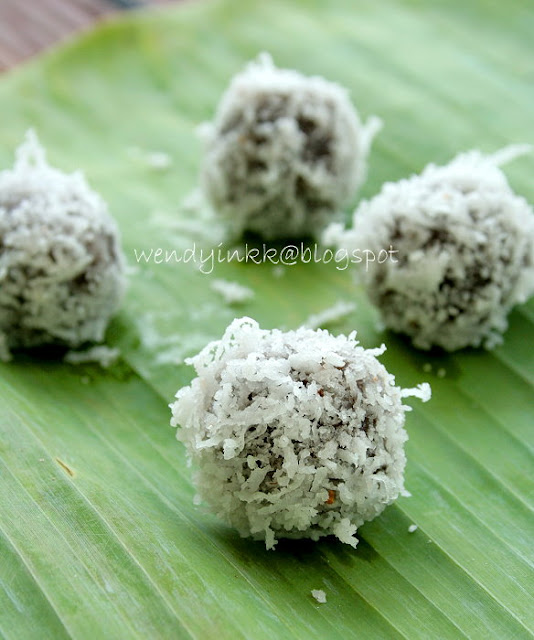 I first saw onde onde kosong on Shirley’s blog. Kosong? Empty? Well, my favourite thing about onde onde is the palm sugar filling that oozes out when I bite into it. But then again, it very tedious to make. If you want the filling to ooze, you have to chop the sugar really fine and the wrapping process is so so difficult. If you chop it coarsely, chances are it won’t finish melting by the end of the cooking process. So I guess incorporating sugar directly in the dough could be a good idea.


I still have lots of black glutinous rice flour, a gift from AlongRoz of HomeKreation. I have wanted to try making this for more than a year but haven’t been putting my hands onto it. Finally I made it when I got some extra coconut from making Chicken Rendang and of course, banana leaves. How to take pics of this without the green leafy container that is so so onde-onde-ey. 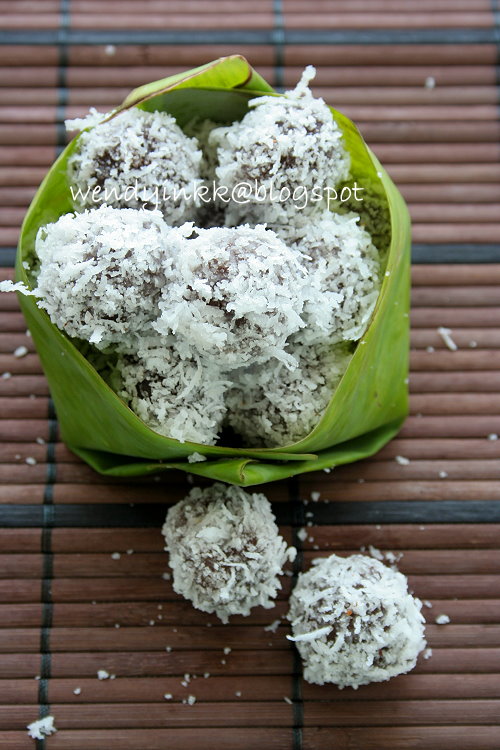 But this black glutinous flour is not something easy to work with. It is not as sticky as the usual glutinous flour, instead it actually taste a bit grainy, like buckwheat flour. I did my first batch by mixing it with regular rice flour, thinking that the rice flour might make up for the absent sweet potato and kneading with cooled syrup. The dough balls were super dry in the center, cooked but dry. Maybe call it like a cookie. Then I found that it lacks stickiness, therefore I added in tapioca starch which is suitable for boiling purposes , but still it is dry and very yucky, although not as bad. Then I decided to ditch the rice flour as I guess it really lacked starch which was why it wouldn’t get chewy. So I used 2 parts starch and 1 part black glutinous flour and added more water. When I added more water, it couldn’t hold itself so I zapped it in the microwave for a while to slightly cook the starch. It did hold up better, small dry center, and a chewy texture when warm. I knew I was almost there. 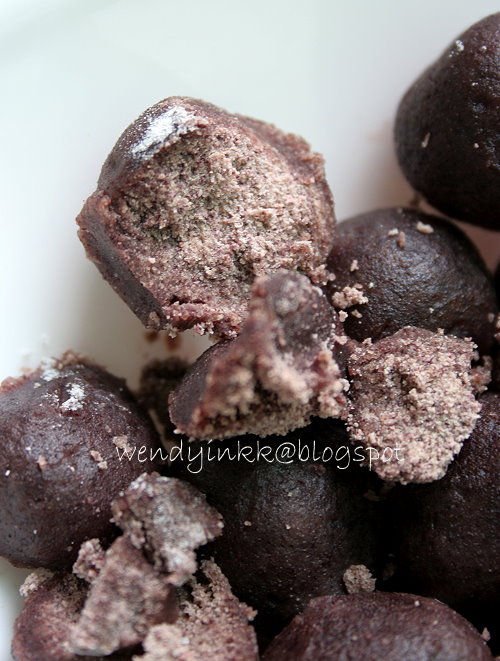 First attempt with a dry cookie feel, it is cooked, but dry
Finally, I used more water and poured in hot syrup to half cook it, and zapped it to cook it further. The batter firmed up to a rollable stage and finally, I got the texture I was looking for. With 4 attempts, I finally got it. Firm, sticky, soft and chewy, even when cooled down to room temperature for 3 hours, and the BGR flour is not gritty when made into kuih, just don't bake cakes with it. 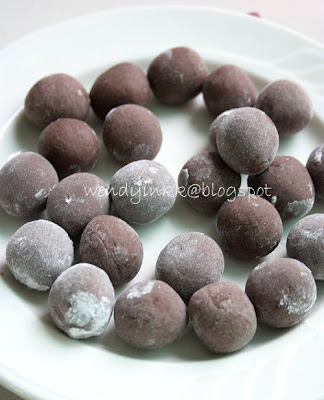 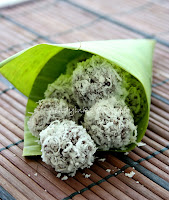 1. Mix black glutinous rice flour and starch together and make a well in the center.
2. Bring water and gula Melaka to a boil. Lower to a simmer with lid on until sugar dissolves.
3. Pour boiling syrup into well. Mix to form a very soft sticky dough. The dough will not hold it self up. Microwave dough on high for 20 seconds. Stir the dough and microwave for another 20 seconds. Stir the dough well, it will form a dough that is rollable.
4. Roll dough into small balls. Dust hands with tapioca starch if needed.
5. Meanwhile, bring a pot of water to boil, put in shredded pandan leaves to infuse for 5 minutes.
6. Fish pandan leaves out of water and put in dough balls into the boiling pandan water.
7.Put in dough balls when water is boiling hard. Simmer on high heat for 2 minutes then lower to medium heat until the dough balls float.
8. Boil on medium heat until they float.
9. Fish out floating ones and roll onto freshly shredded coconut. 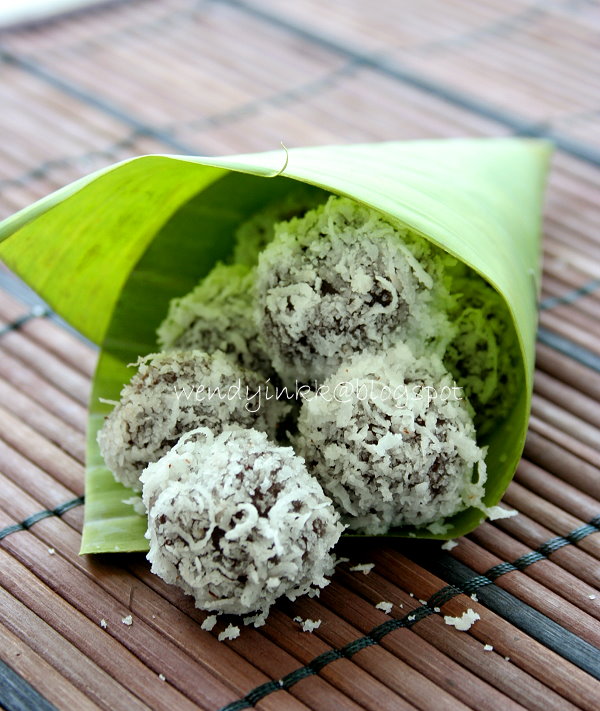 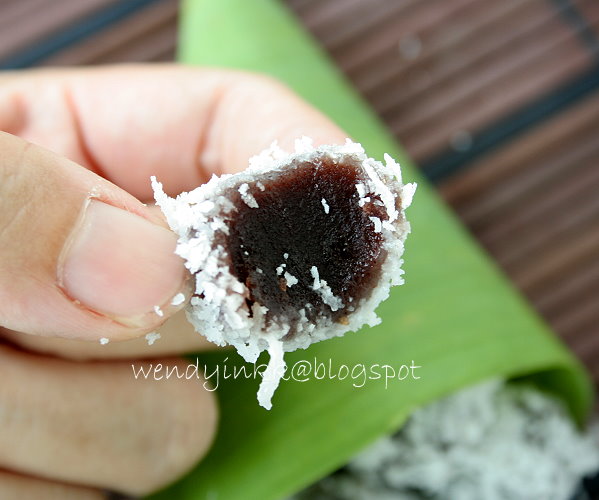 I'm submitting this to
Aspiring Bakers #12: Traditional Kueh (October 2011)
hosted by SSB of Small Small Baker
Posted by WendyinKK at 11:27 AM