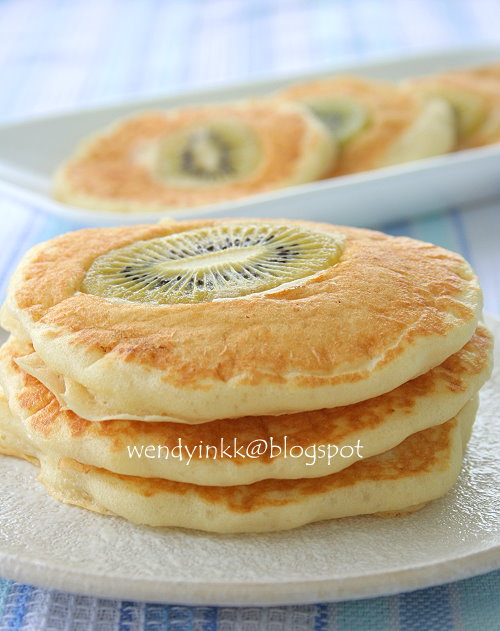 I saw the use of kiwi in buttermilk pancakes in a local women’s magazine, but I didn’t note down the recipe, but I knew it used buttermilk. It was very pretty.
I have never used buttermilk before this. I mean buttermilk from the carton. The cultured buttermilk that I’ve got looked like watered down yogurt. If you add lemon juice/vinegar to milk, that is not buttermilk but soured milk. It can give you similar results, but not as good 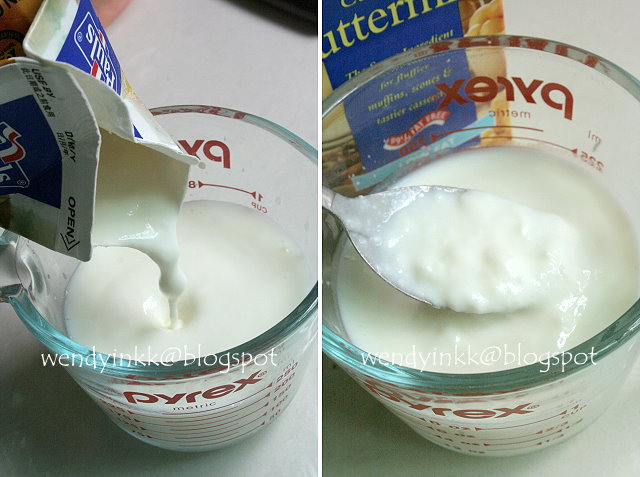 Traditional butter is made by letting the milk sit and ferment before churning, and the fermented liquid residue after churning is buttermilk. It’s in a fermented form, so it’s sourish and acidic. If you make your own 'buttermilk' by separating your cream (either by beating or shaking and not by culturing), the liquid residue is not sour, due to absence of bacterial activity. If your homemade buttermilk isn’t sourish, how can it react properly with baking soda to give it that infamous softness and fluffiness? So, I’ll still stick to yogurt + milk, if I need a good substitute for this so that I can get the similar viscosity. But then again, I've tried using yogurt with this same recipe, it doesn't give the same results, it's much less favourable.
I know some people will say, can just substitute with soured milk, that is milk+lemon juice/lime/vinegar. But to me, the result is not the same. The result of soured milk pancakes is similar to those made from yogurt, furthermore, the viscosity is not there. It makes the pancakes spread and thus, less height. There was no turning back after I tried buttermilk, as in real buttermilk, not soured milk.
I love how thick I could make this pancake to be, but yet, soft and fluffy, almost like sponge cake. And the recipe is very easy to remember too! Almost one of everything 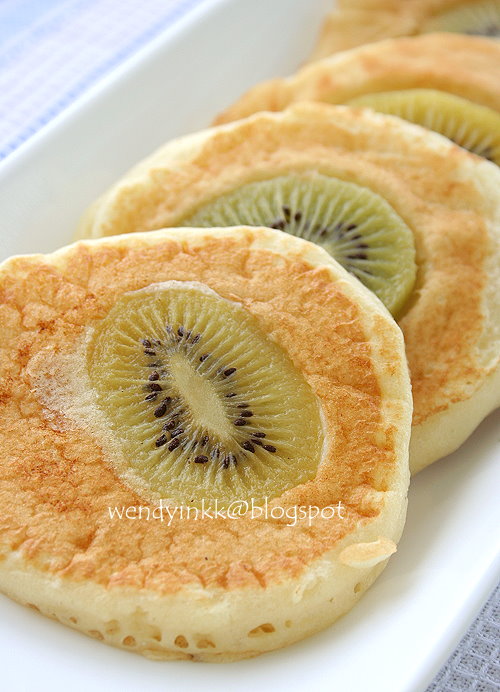 Buttermilk Kiwi Pancakes
Recipe with minor adaptations from: Fine Cooking
Makes: 10 slices of 4-inch wide pancakes (batter spooned with a Chinese soup spoon)
1 cup cake/superfine flour (120gm, original called for plain flour. I weighed my one cup of flour to make sure I get the same amount next time)
1 tsp baking powder
½ tsp baking soda
1½ Tbsp sugar (original recipe was 1Tbsp, but I used slightly more than original recipe due to the presence of kiwi which is *sour*)
Pinch of salt
1 large egg
1 cup (250ml) buttermilk
1 Tbsp butter (15gm)
2 kiwi fruits, each sliced into 5.
1. Heat a non stick pan and heat the butter until just melted. Let it turn warm.
2. Sift cake flour + baking soda + baking powder together. Mix in sugar and salt. Set aside.
3. Mix egg with buttermilk. Mix in melted butter.
4. Pour (3) into (2) and mix until combined but not smooth.
5. Heat the pan (used in 1, no need to wash) and put in one slice of kiwi. Top the kiwi with 1 heaped Tbsp of batter. Cover pan with lid (if you have, if not it’s ok) and let it cook on medium low heat.
6. When the rim of the pancake has cooked (solidified), flip the pancake to cook the other side, take care not to dislodge the kiwi.
7. Repeat cooking process until batter is used up.
8. Serve pancakes with honey and butter
*Note: you can either reverse the batter/kiwi procedure, meaning batter first, kiwi on top. Works the same but there is a risk of the batter covering the fruit when you flip.
**I made some with bananas because Lyanne doesn’t take kiwi. 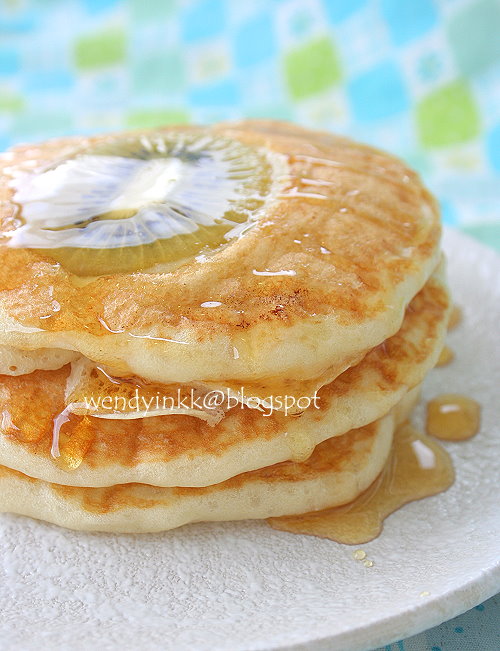 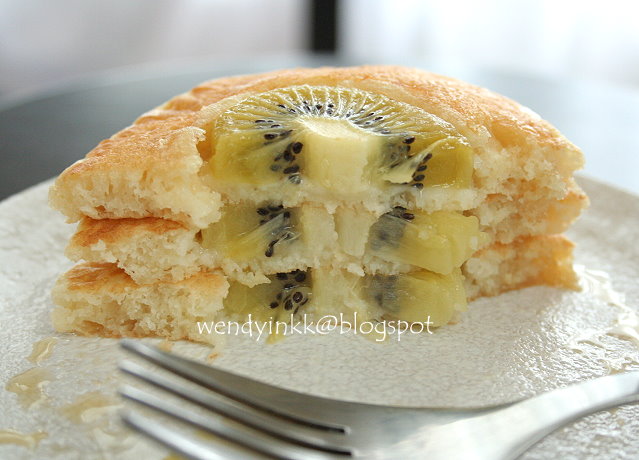 One note about the colour of the kiwi fruit. Mine were quite green before cooking, and they all turned yellowish later. The picture of the kiwi pancake in the magazine was still brightly green, hmm... did they edit the pics or did they brush on food colouring to the kiwi slices?

My carpenter happened to drop by to fix my cabinet's hinges and he had tea at my place with these. :)

Email ThisBlogThis!Share to TwitterShare to FacebookShare to Pinterest
Labels: From books, From the net, Pancakes, Snacks-pancakes