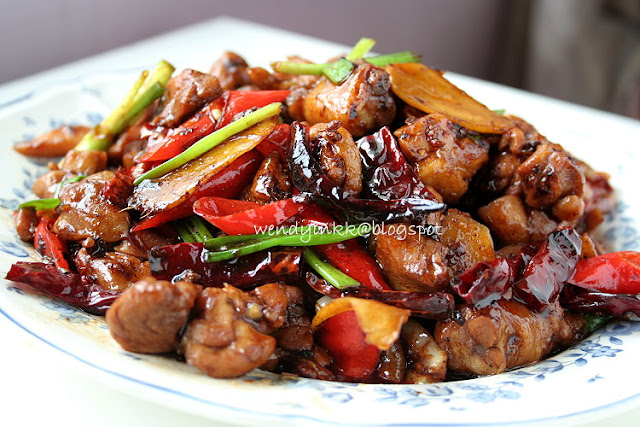 This is one post that I'm very frustrated with. Not with the recipe, but with the pics. With the lot that I took, 90% were blur and out of focus. Sometimes, thare are so many pretty pics that I don't know which to select and sometimes I just have to make do with the best among the uglies, and this is one of them. The small LCD display on the camera never tell the whole story, but when the food is eaten and the pics are loaded into the computer screen to see, You will feel like screaming.......

Again for a DSLR point and shoot user, every picture is a gamble. I do not know what is what on the camera, I just focus and press to shoot. The outcome varies all the time. Don't think that my pics look that good right after shooting. I can't live without make up, so can't my pictures live without editing. It's the part that makes everything look prettier. And people who look at the final product happier. You won't want to see me being unhappy with ugly pics. Hahaha! I'll throw the camera and stomp on it til it turns to ashes. Well, that's exagerated. If I can stomp a camera to ashes, I am a superheated monster of which I am totally not. I'm a demure mother and wife *sniggering*

Okok, now I still have a lot of Szechuan Peppercorn left and whenever I come into contact with recipes that utilizes them, I get all excited. Somehow we didn't get the numbing effect after consuming this, or maybe we didn't bite into the peppercorns. We spit it out whenever one gets into our mouth. But it sure does taste good. 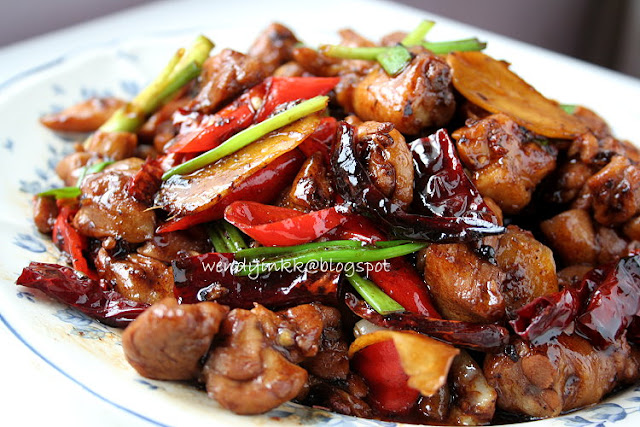 1. Cut boneless chicken meat into preferred sizes. Marinate with salt, cooking wine, light soy sauce and pepper for at least 1 hour
2. Combine gravy mixture and set aside
3. In a hot wok, put in ½ cup of cooking oil. Let oil heat up, make sure your spatula is heated and coated with oil too.
4. Put in chicken and spread it around. Do not toss it.
5. Let it cook for a while then only flip the chicken. Cook until there are no more juices and chicken seems to be releasing oil. Drain and dish up.
6. Discard some of the oil if it’s too much. On high heat, sauté smashed garlic and ginger. When it’s fragrant, put in Szechuan peppercorn, dried chilli and half the fresh chilli. Cook until it is very fragrant.
7. Put cooked chicken back into wok and toss. Cook for 1 to 2 minutes and put in gravy mixture.
8. Cook until gravy is reduced to preferred consistency. Taste and give it a quick adjustment.
9. Dish up and serve.
Posted by WendyinKK at 11:23 AM