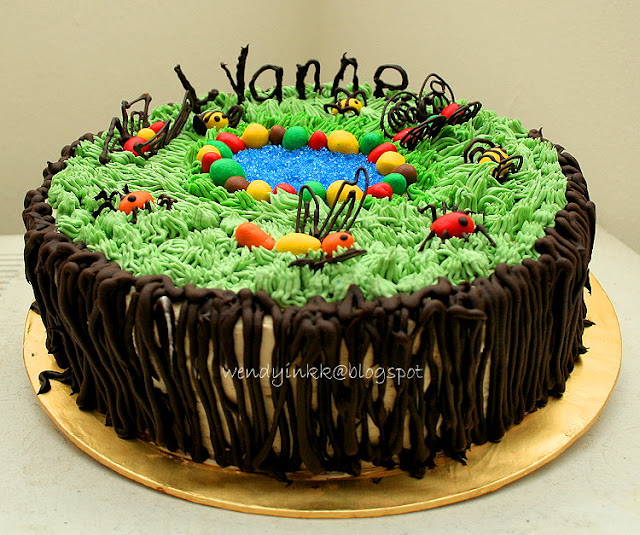 I made 2 cakes for my kids usually, one to celebrate at myside, the other cake at Mike's side. As both families live about 80km away from each other, it's best that we do it twice, rather than to have everybody travel.

Since Lyanne's birthday is so near to Christmas, and there's definately the most people on this day at my home. So, her birthday cake for my side of family will always be on Christmas.

Celebration No.1
Unfortunately, few days before Christmas, both kids, Mike and I all fell sick. Nothing serious, just flu. Runny noses, tired and sleepy. I couldn't travel down to Ipoh to get the stuff I planned to use for her cake this year. Well, lately, she's on pizza craze. Not that she loves eating pizza, but everything flat and round, she will call pizza. And she will say pizza pizza non stop. It's a humourous scene to see her being so "pizza crazy". So, it gave me the thought of making a pizza cake. But since I got sick, or the whole family got sick, I can't drive 40km to get my ingredients. So, I tried to find them in KK, sadly, I can't even get red dragon fruit during those few days. I know it's quite a common fruit nowadays, but it seems the bad weather and bad timing made the fruit unavailable where I lived.

I couldn't decide on the theme for her cake, since my mind is sad about my "canceled" pizza cake. Plus flu don't seem to make my nose stuffy, but my mind too. Anyway, I just simply baked 3 cake layers. I literally mean simply. I made the sponge layers by just throwing in ingredients. Hahahahaha. The layers are Brown sugar sponge, chocolate sponge and vanilla sponge. Don't ask me what I used that day, I can't remember. Hahaha. Looking at the sponge layers, its 8pm on Christmas Eve. What shall I do??? Besides her pizza craze, she is crazy about flowers. But the problem with KK is that fresh flowers are not easily found. I can't make her a flower pot cake. The next best thing will bugs,spiders and butterflies. Then I suddenly thought of using candies and chocolate to make the bugs, and set them in a garden. Immediately I called out to Mike to get downstairs and buy me some peanut M&M's. Yes, it's really "go down and buy". Haha. There are 3 grocery stores few doors away, still open at that time, 8pm!!! No M&M's, but only local copycat versions called NIPS, and well, it's just the look that is important, tastewise, set aside first!!

I quickly made some buttercream, as I am really worried about tinting dairy cream and frosting, as what happened with my Carousel Cake, the cream won't stand the heat from my hand as I pipe it for a few minutes. But still, real buttercream(not shortening or margarine) laden isn't all that too friendly too, especially when the cream was pushed through fine nozzles. Friction and force seem to melt it too!!! But that's almost at the end of it where my hand has been squeezing and squeezing the piping bag. Grass is no easy feat to do! I used to think that grass is easy peasy. But hahaha, it's not. Mine looked like they've been runned by a crazy lawnmower, left and right. And then, I ran out of buttercream, with a patch in the middle!!!! Aiyayaya!!! What to do? Make a pond then!! But using what? Jelly? Piping gel? Nah, no time for those, and all shops are closed by now. I then remembered a cake deco method in book I read, coloured sugar!!! It's just regular sugar rubbed with gel food colouring. Simple and pretty.

I finished the cake by 11pm. Just in time to clean up and send the kids to bed. I had to catch a good night's sleep, waking up a lot earlier than usual to travel home for Christmas.

Here are some of the bugs 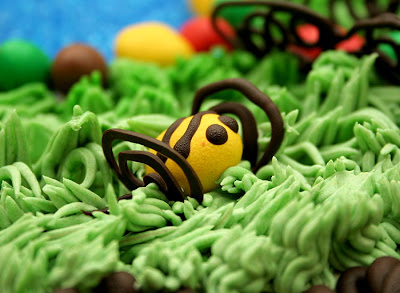 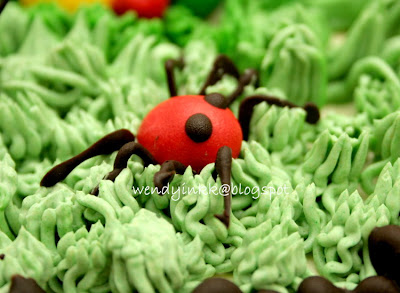 A Spider, Lyanne's favourite bug on the cake 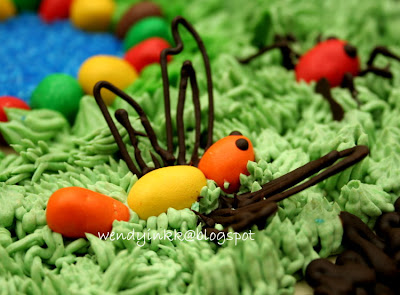 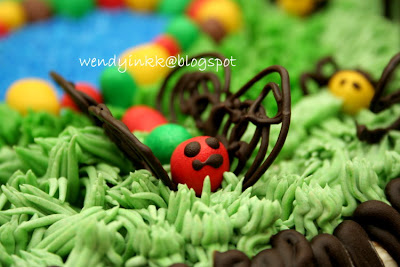 Butterfly, LOL, wings too short
And wordings on her cake, 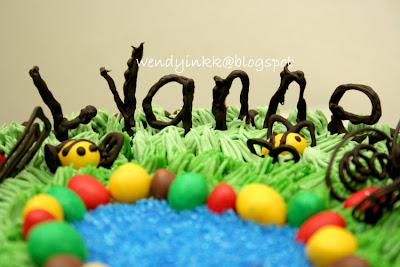 The next day, after the family Christmas Luncheon, we planned to head to my Big Aunt's place for presents time, and cut the cake there. But my mom insisted we cut the cake at the restaurant, cos my mom's sis in law happened to be there, so, she wanted to pass her some cake. Everybody was so so full with food, so, oklor, just sing song and blow candles. The kids were "Aww" and the adults went "This is a last minute cake??? Can't believe it". Lyanne could recognise all the bugs I made, which means, not a too shabby job. Hahahaha, well worth the effort :p 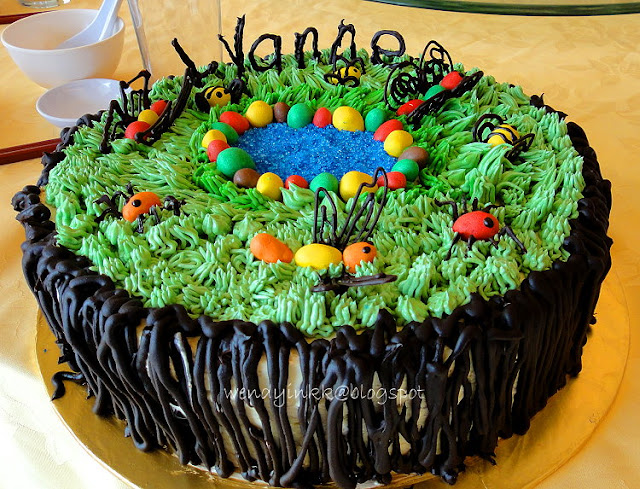 But the kids insisted on eating the cake after the candles. The kids didn't eat much of the proper food, so, they had room for cake, but not the adults. In short, everybody loved the cake, but found the brown sugar layer a bit dry, maybe I guess I chilled that layer in the fridge without covering and there was no liquid in that sponge, the other layes I added some milk. 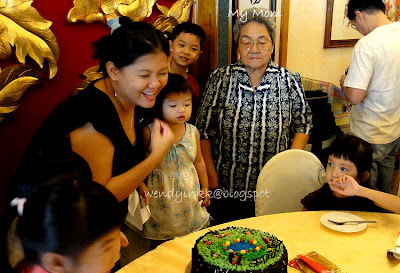 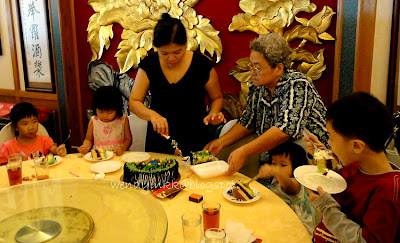 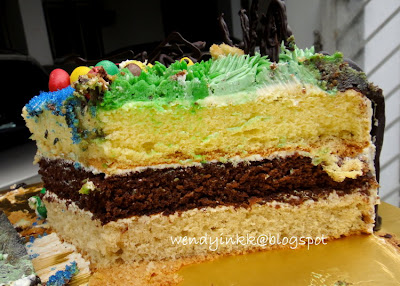 One week later, I planned for another celebration on Mike's side. Last year, when Lyanne turned one, I didn't do her a proper birthday party with food and guests. It was just a simple candle blowing session as my sister in law came back, and everybody so so busy, every weekend booked full and there was no time to squeeze in anything. I felt bad that somehow Lydia's 1st , 2nd and 3rd had few parties to go with it. I must give Lyanne a party this time. She might be born at a time where everybody is busy, but that's no excuse for me as a Mom. So, I called up their ex-nanny, Mike's close relatives and a good friend of Mike happened to be in town. A simple party it maybe, but better than none. 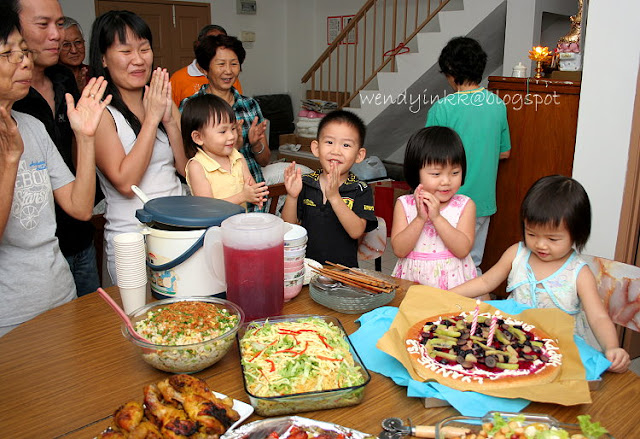 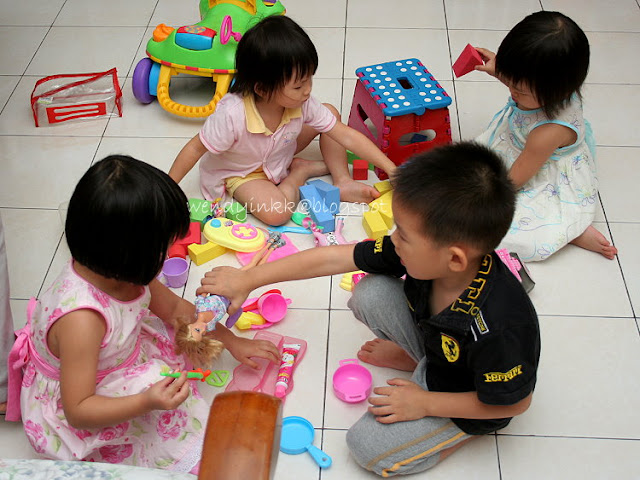 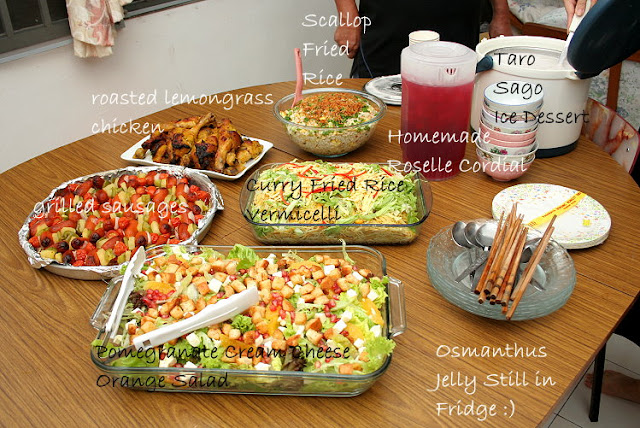 and of course, a cake, a PIZZA CAKE!! Finally.

But to my dismay, my super imaginative girl, Lydia couldn't figure out the cake. Usually she will give names to cakes when she looks at it the first time, but not this one. She looked and looked and kept quiet. Urrrghh!!!
Somehow I felt I failed this time, if Lydia cannot figure out the cake, so can't Lyanne. Truly enough, when it's time to blow candles, Lyanne wasn't screaming "Pizza" when she saw it. Urrghh!!! Fail, fail, fail. Even until today, Lydia won't call the cake Pizza cake. She will say dragon fruit and kiwi cake. Even the guests who were present, they only knew it was a pizza when I told them. See how badly I failed in my mission of creating a pizza cake that would make my girl scream with delight. Taste wise, everybody loved it. A bit sweet from the "tomato" sauce, but still ok. The "tomato sauce wasn't that sweet when I made it, but somehow gotten sweeter as it cooled down. Weird right? 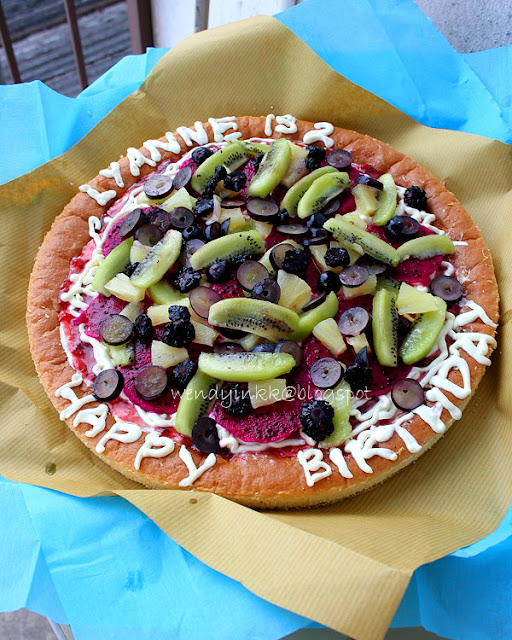 As for recipes, some of my guests asked me whether these will be on my blog. I cooked like a mad woman that day as I had to care for my girls, make them nap, bathe them, clean them, feed them. So, I didn't measure my ingredients, didn't weigh nor using proper spoons. I just dumped stuff in. I had to rush for time. Even the cake could only be done on that day itself, as the dragon fruit will stain everything if I made it too early. The cake couldn't be baked earlier as well as there is no where I can keep a 14 inch cake without drying it out or exposing it to ants. My DH, where was he? He just did his own stuff, napped as he pleased. Men, men, men. 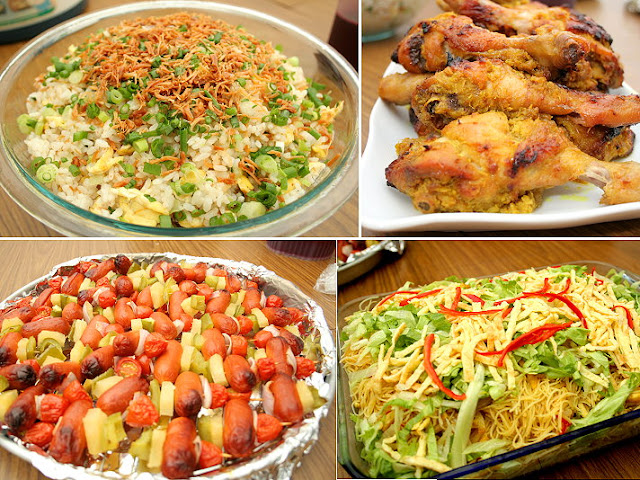 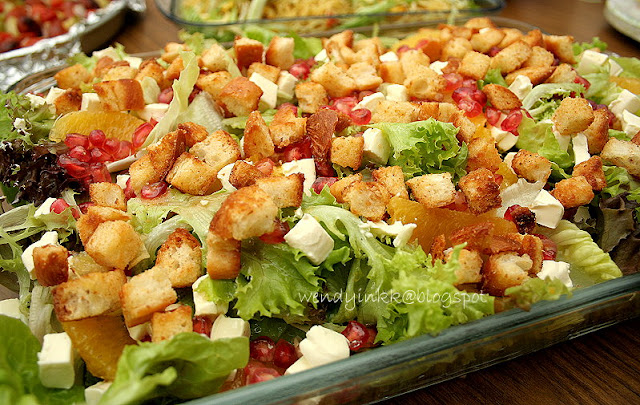 Some were old recipes and some were new, like the curry rice vermicelli and the salad. The salad was very good, even my almost-carnivore Mike ate 2 platefulls of it.
It was a super tiring day and I blacked out the moment I landed on my bed. I'm not the regular woman that I was, I'm more lethargic now. I may be at 18 weeks now, but the 2nd trimester doesn't seem to give me that much of energy compared to the previous 2 pregnancies.
But it was all worth it.

Recipe for Pizza Cake will be out tomorrow. This post is getting too long!!!
Posted by WendyinKK at 9:10 PM