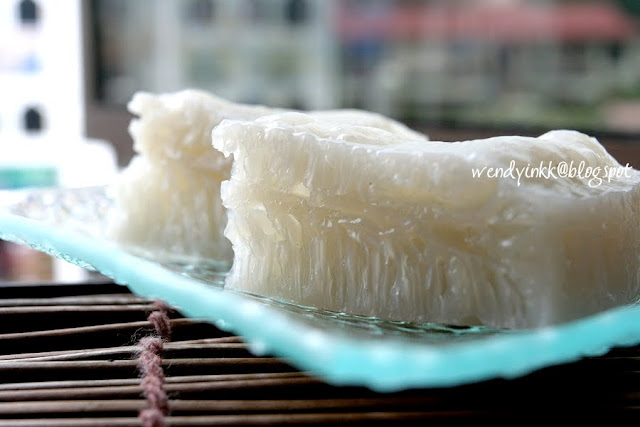 Almost similar to Aunty Yochana’s version, but minus 42 hours and the rice fermentation stage. The wine yeast is added directly into the rice flour, which was the kuih starter dough (step 2) in Yochana’s version
Still, this will take you 36 hours to complete. Even though it looks like 3 days, but it started late at night on day one and ended early on day 3, altogether is 36 hours, less than 48. And remember if ever something suddenly came up that makes you unable to do the next stage or steam it on time, just pop it into the fridge for not more than 3 days. But, one or 2 hours delay won’t make much of a difference, should you need the one or 2 hours extra.

It was the picture that seduced me to try this recipe. That was my ultimate result, and I achieved that in Aunty Yochana’s Version. And not many have tried this recipe, not even those in Chinese. I tried googling it based on the recipe, and I only found one on page 10 of google result . What more about this recipe in English…. None.. Well, as earlier said in the 1st version, I never saw any English Pak Thong Gou doing it with wheat starch, of course there will be none with this long version as well. 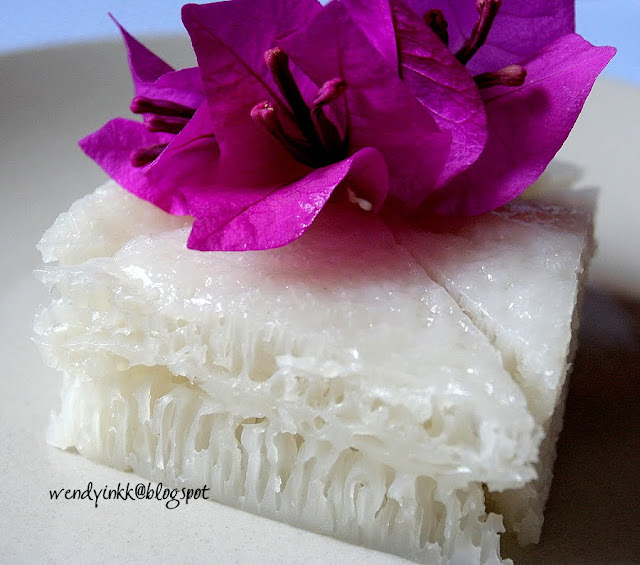 One weird thing about this recipe is the egg white. What is the function of the egg white? I don’t know. Anyway, when it was put into the hot sugar syrup, it’ll cook and it will be sieved away later. So, why add that? The answer might be that the egg white protein, albumin, is used here as a fining agent in wine making. After reading a few sites . about wine fining, it seems that it’s raw egg whites that is used and not cooked egg whites, so why is this added in as cooked egg white?

Actually the original recipe called for yeast, but yeast to ferment for 18 hours minimum at tropical room temperature? Gosh, I don’t want to make express rice vinegar. The recipe was in Chinese and the original source is unknown, they copy and paste it everywhere on the internet, so the “yeast” they mention, I’m not sure whether it’s the Chinese yeast or western baking yeast. If they call for ½ tsp of baking yeast to ferment that long.. I can still “maybe” accept it, but 2 tsp??? A bit too much, seriously.Maybe in cold China, it can really take that long, but not here. I can make the cake in only 2 hours if I use 2 tsp, just like any of those express versions. So, I'll use Chinese wine yeast. Nevermind, I’m the guinea pig here. 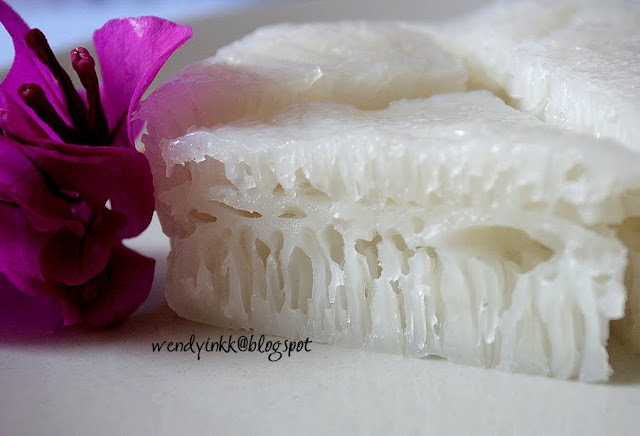 Ingredients:
55gm rice flour
1/2 tsp sugar
125ml boiling water (measure after boiling)
2 tsp Chinese sweet wine yeast biscuit (crushed into powder), or ½ tsp yeast (In tropical warm weather, if you follow the original amount, you will have rice vinegar by the end of it)
Method:
Put rice flour and sugar into a bowl. Pour half the boiling water into rice flour and stir. Pour the balance in and stir. Leave to cool down. Put in crushed wine biscuit and stir. Put flour mixture into a non air tight container. Leave to ferment for 24 hours in a warm place, away from direct sunlight. Open container the next morning to let it breathe for a few seconds and cover again. Do this again later in the afternoon.

Ingredients:
175gm rice flour
50gm wheat starch
250ml water
Method:
Mix rice flour and wheat starch with water. Let the mixture sit for a few hours (2-3). The rice flour will settle to the bottom and water will be on top. While preparing the syrup below, carefully pour away the water.

Ingredients:
180gm sugar (original proportion is 300gm)
250ml water
1 Tbsp egg white
Method:
Bring water and sugar to a boil. Turn off the heat. Put in egg white and stir. Sieve syrup and pour into (B).
Cover and leave until 11pm. 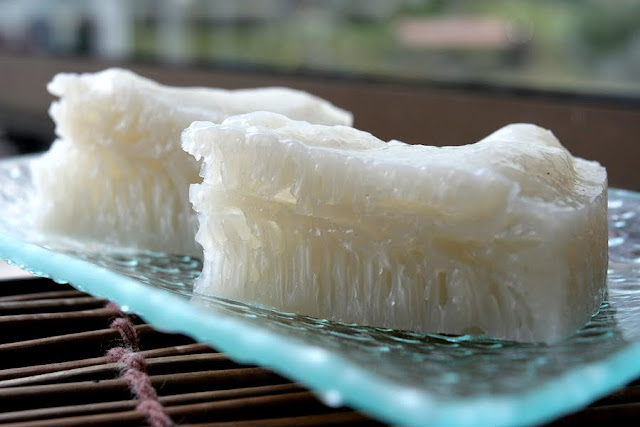 I’m not sure whether it’s due to wheat starch that pak thong koh can get double decker results , as I did it here as well (although not as equal as those that I got with aunty yochana’s version, it’s thicker at the bottom this time), just like the pic in Haochi123. But mine was a bit wavy on top after being steamed, not as flat. Maybe I was using less sugar. Or maybe I was using high heat to steam rather than medium high heat. Sometimes, sugar do play a role, but I really can’t stand the amount of sugar used in the original recipe. Try out the original amount if you like things sweet, and please let me know.

And oh ya.. I’m going to try out the 1st version again. I won’t cook it this time, and if I still get double decker honeycombs, then I confirm it’s the starch, but if it’s not, I guess it’s due to the wine yeast. 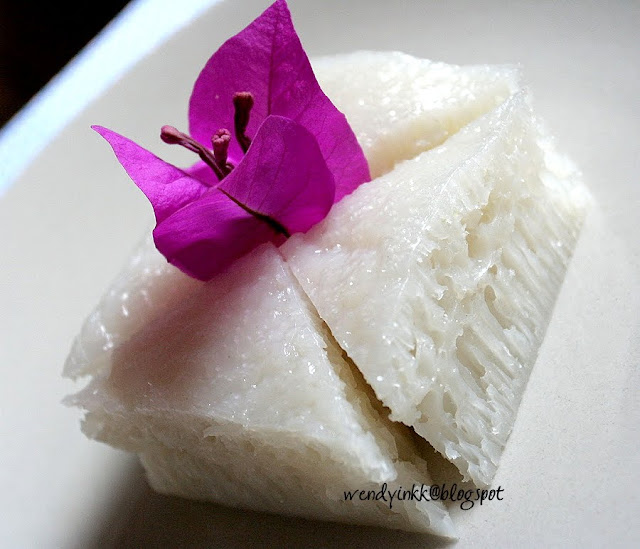 Posted by WendyinKK at 1:09 PM