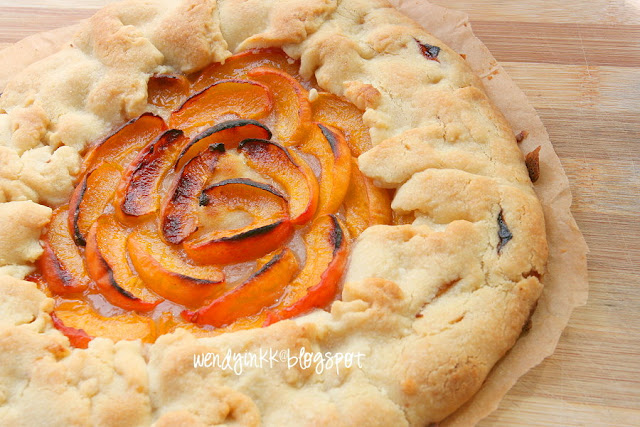 The dough became a batter.
That was what happened when I followed the recipe (not telling the source ;-P ).

Then I checked other recipes out,
My Baker’s Dozen Cookbook says
1 cup flour and ¾ stick butter

Another site says
1 and ¼ cup flour for 1 stick of butter.

So how can this recipe I used call for 1 cup flour with 1 and ½ stick of butter. That’s like double amount of butter compared to the one in Baker’s Dozen. Gosh…. Learnt my lesson the hard way.

I added more flour and almonds to make the dough pliable, it’s still soft, but way harder than before. At least it's manageble.
With all the additional flour and ground almonds, I had such a big piece of rolled out dough that it didn’t fit my freezer or fridge, so I had to cut it out to a 12 inch circle. I’ll use the cut outs later for a tart,

I felt so “urgghhh!” that I didn’t even feel like glazing the side with butter and sugar before baking. 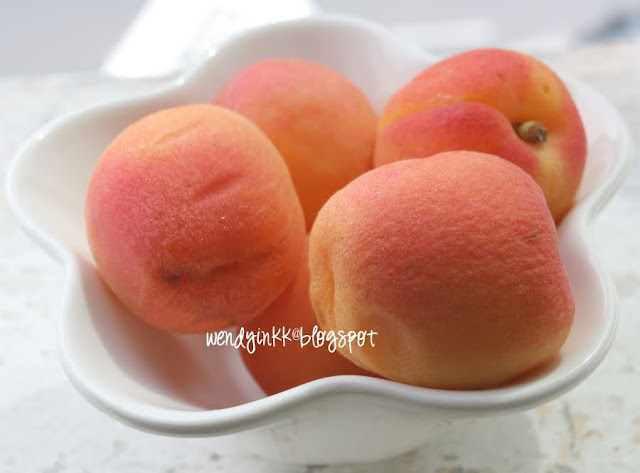 
This recipe below should be the one that works, I cut 33% of what I actually used in total for the dough today, since there were extra dough.
I rewrote the original recipe to be a logical recipe based on other recipes after everything was baked. 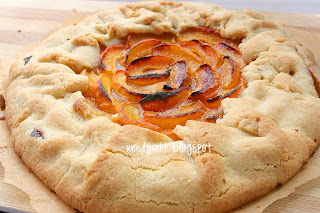 5 ripe rosy apricots (they look yellow when unripe), please taste them at this point to determine how much sugar to sprinkle later
3 Tbsp sugar, more if they are tart.

1. Preheat the oven at 180/200C. Prepare 2 pieces of non stick baking paper about 13 inches square
2. Mix almond meal, icing sugar and flour together. Rub in butter until mixture looks like crumbs.
3. Add water bit by bit until dough can be formed. You may not need all the water.
4. Lightly flour dough and place dough in between the baking paper. Use a roller pin and roll out the dough to be come a 11-12 inch circle with about 3-4mm thickness.
5. Peel upper piece of paper. Place paper back onto dough, lightly smoothen paper onto dough. (This is to ease removal later)
6. Place flattened dough, with the “upper” paper side down in your baking tray. Now, remove the lower paper that is now on top.
7. Place the whole tray to freeze for 10 minutes (or chill for 30mins).
8. Meanwhile, slice the apricots (you can use them unpeeled).
9. After 10 minutes, remove the dough from the freezer and arrange all the apricot slices onto the dough, starting from 4-5cm from the edge. Sprinkle sugar over apricots. Be generous if they are tart.
10. When arrangement is done, fold edges of dough over fruit (use the baking paper to help you fold), overlapping each other, so that there will not be tears or gap that will allow the juices to escape while baking.
11. Brush folded edges with melted butter and sprinkle with icing sugar.
12. Bake for 40-50 minutes or until golden brown. (I did 30 mins only as my apricots were starting to burn) 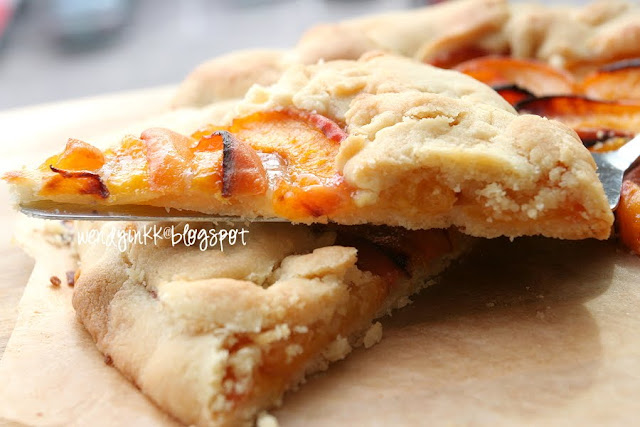 Verdict:
The apricots were so so tart!!!! I squinced when I ate them, even after I sprinkled sugar on, the sweetness went undetected. Only the sweetness from the crust tried to overcome the tartness of the imported apricots. I asked Mike’s aunt who also ate this whether the apricots she had back when she was in the UK tasted like this, she said no, they were much sweeter. Sigh, will sweet apricots ever arrive on our shore???? Even these super sour ones were RM10.90 for 5 pcs. I went to Jusco again the following week (after I got these) and I saw them at RM8.90 for 8 pieces. Prices do change fast. 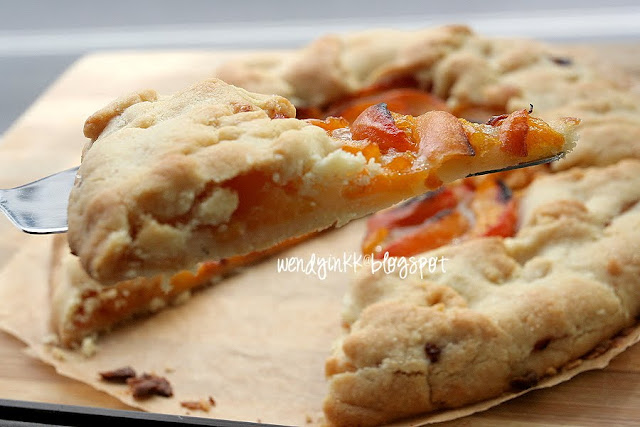 Despite the super tart apricots, the crust was good. The ground almonds madethe difference. I’ll do this again next time, maybe with apples, or plums or canned apricots, hahaha. But not with fresh apricots again, unless I manage to get sweet ones.
Posted by WendyinKK at 11:01 AM