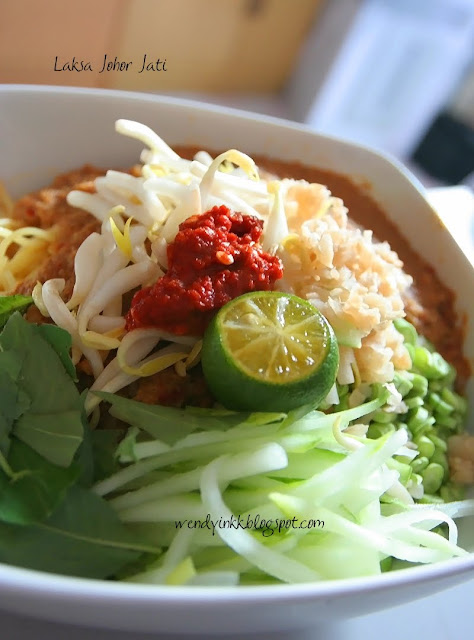 I think this is the least known Laksa in Malaysia. Even my Malay colleagues have never heard of it. Well, They know laksae, laksam, laksa utara…
Sarawak laksa , Nyonya Laksa and Assam Laksa is more popular with the Chinese, but hey, Johor Laksa is a Malay Laksa.

Johor laksa is spaghetti served with a thick spicy fish gravy, topped with fresh vegetables. The gravy is a marriage between Laksam and Curry. The condiments is almost Laksam like, except for the preserved radish. When u finish eating the laksa (spaghetti), the gravy will be gone too, just like eating spaghetti Bolognese.

Although this is Johor Laksa, but it is not found all over the state. I’ve been staying in Segamat which is located in north Johor for 2 years(2004,05), and it was not seen or even heard there. This laksa is only popular at the tip of the sweet potato, in Johor Bahru(JB). I stayed in JB for almost 1 year(2003), and during fasting month, I’d be scouring the food stalls looking for the best Johor Laksa. There are RM2 per portions, RM4 per portions, some even RM5. Why such a major difference in price??? It’s in the gravy. Once I bought the RM2 stuff, being adventurous, just wanted to know how different is the 50% off. I tell you, I regretted that I wasted the RM2. It’s so watery. Just like Malay’s penang laksa, but with curry powder and thinned coconut milk. It’s disgusting, I’d say. I’ve learnt my lesson and the next time, I’ll hunt down the most expensive one at the food market, and those never fail my tastebuds.

Actually, the best that I’ve ever eaten was at Giant Plentong, the stalls’s name is Cathay Laksa. Cathay laksa is the one that introduced me to this addictive noodles. I was working for a local bank, during my uni semester holidays (2000) doing credit card roadshows. I was taken to Giant Plentong for 14 days and I only learnt about this new laksa during week 2 and then on, I had to eat it everyday, until the last day of the roadshow.

If you want to give this a taste before making this, and is thinking of Laksa Shack. Forget about it. They served good laksa Johor years ago, but not now. It's so diluted and taste oh so... like the RM2 stuff I got back in JB. Don't even think of eating Laksa Johor there. 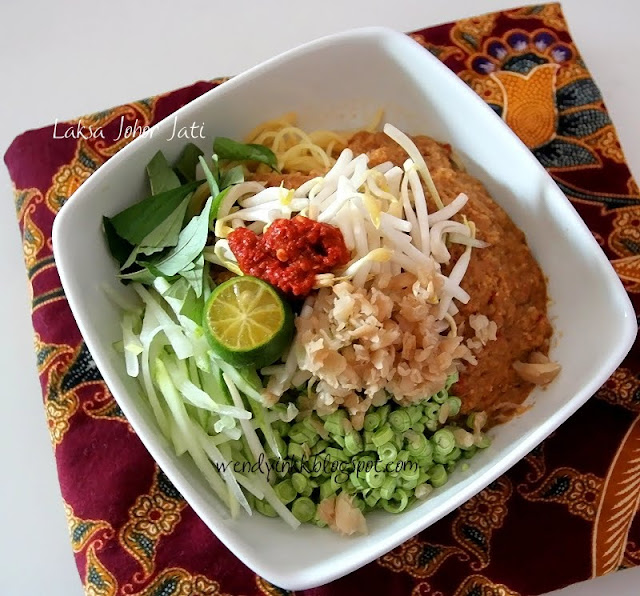 I found this recipe from a local Malay recipe portal, and usually, the local recipes do not provide accurate measurements, something like segenggam (fistful), secukupnya (as needed, how much is needed?), gelas(glass, err.. I think the glasses at my house is different than those at ur house), cawan kopi(coffee cups?? Esspresso? Cappucino??), mangkuk sederhana (how big is the medium mentioned??).. and many others. I wonder how can such recipes be followed. But this recipe, is quite accurate. Giving detailed measurements except for the salted fish. Well, I made this Johor laksa twice, twice using this same recipe, so this recipe really works, no first time wonders. I didn’t put in galangal this time around, cos I can’t get it. It was shriveled up everywhere I tried to find it. I don’t know when will the new stocks arrive, but duh, just skipped that, and it was still fine. I did some minor adjustments to the recipe and I guess I’ll follow this the next time I do it again.

Here goes the recipe. It's pretty long winded and it can serve 10-12 persons. 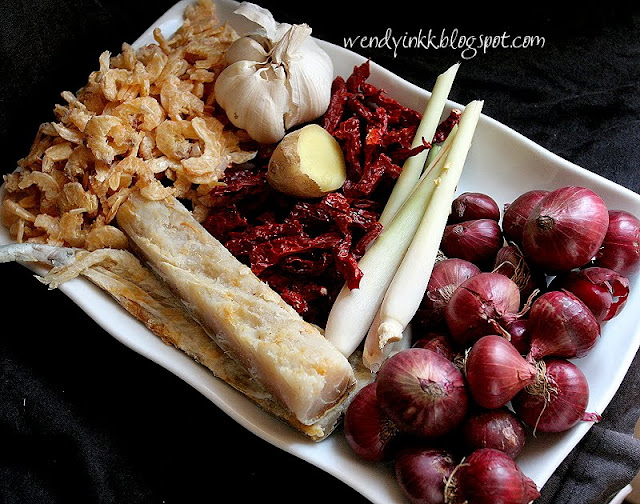 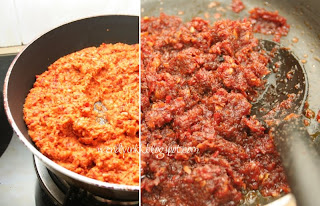 1. Blend everything into a paste with ½ cup cooking oil.
2. Cook the paste until very fragrant.(pic on right)
**No need to wash the blender after this. Continue to use the same blender unwashed until (D). 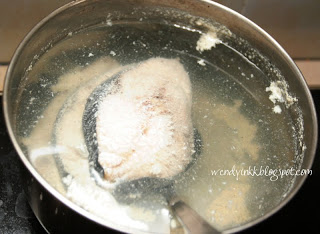 (B)
500gm Spanish Mackeral/tenggiri
1. Boil fish with 3 cups water until cooked. (pic on right)
2. Take the fish out (retain broth) and let it cool down. Remove bones.
3. Pulse with with another 2 cups water. 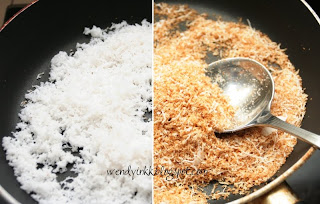 (D)
5 stalk lemon grass (4 inch from base)
100gm freshly grated coconut
1. Toast coconut on a frying pan until fragrant and golden. (pic on right)
2. Slice lemon grass finely and place into the blender together with toasted coconut.
3. Blend with 1.5 cups water. 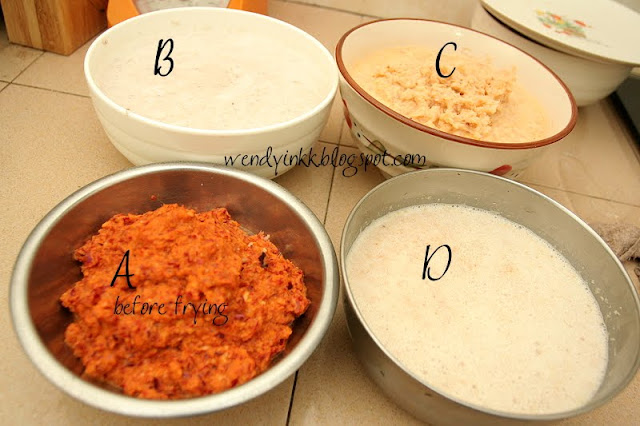 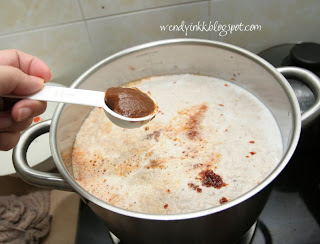 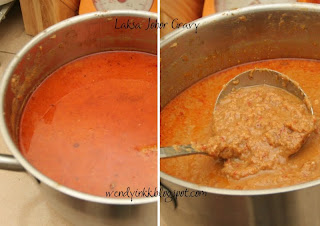 2. Bring a boil and let it simmer (lid on) for 30 minutes or until coconut oil is released. Season with salt. Turn off the heat and let the gravy sit , lid on.
3. Best made 12 hours ahead before serving
Condiments
1. Calamansi lime
2. Bean Sprouts, ends trimmed
3. Long Beans, finely sliced
4. Chopped preserved radish, soaked for 30 minutes, squeezed dry, dry fry until hot and dry.
5. Basil (daun selasih) or Laksa leaves(daun kesum). Washed and remove from stems.
6. Cucumber, finely julienned without the seeds
7. Sambal Belacan, six fresh red chillies blended with a thumbsized belacan. Uncooked. You can control the spicyness with this. 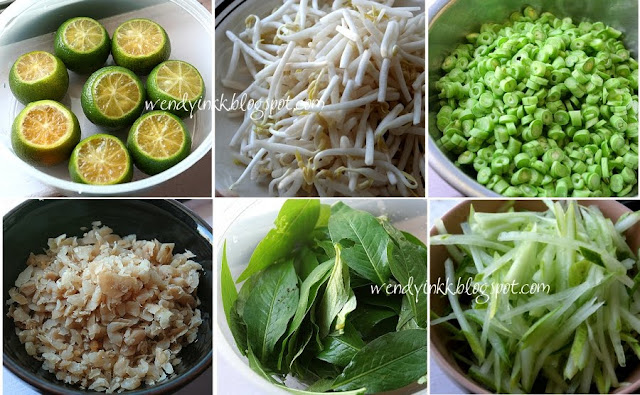 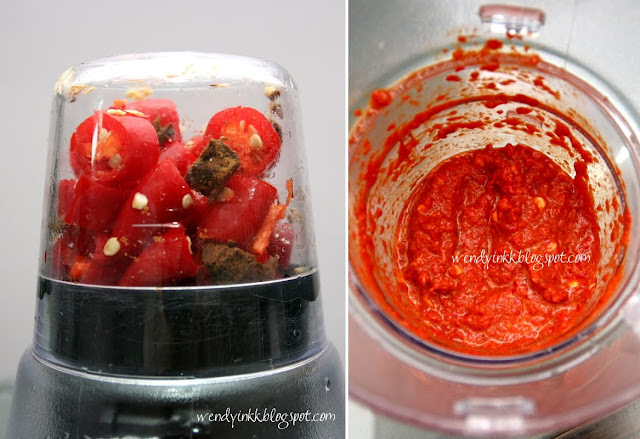 To serve
1. Cook 1 packet(500g) of spaghetti according to packet’s instructions. (I used San Remo’s Vermicelli)
2. Divide spaghetti into 10 portions. Top with condiments.
3. Ladle over gravy. Squeeze juice of 1 calamansi over and toss everything.
Voila!!! Yum yum!!! 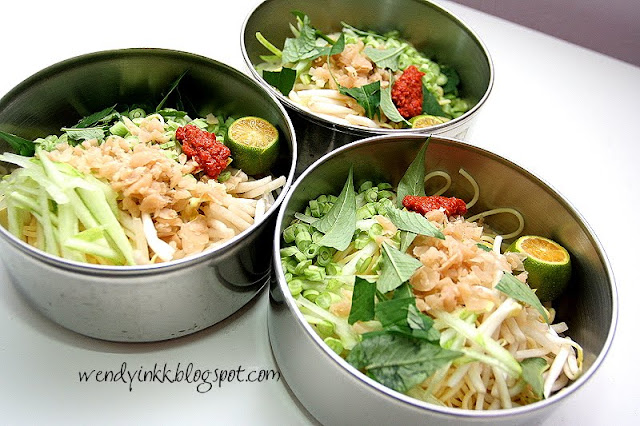 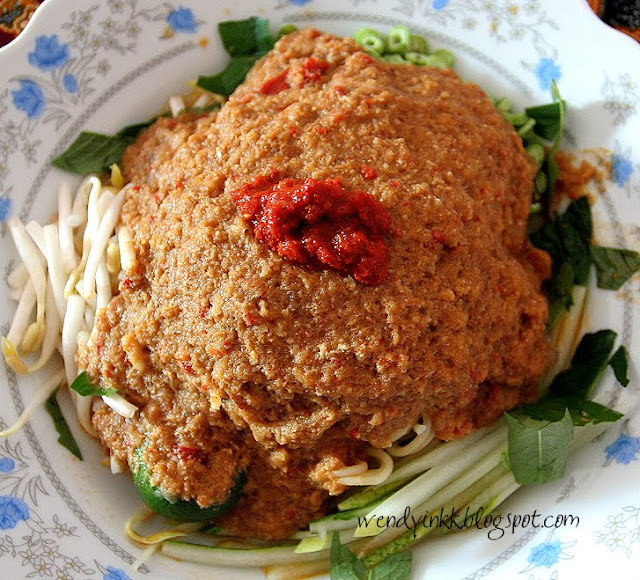 You can either do it condiments bottom and gravy on top or gravy below and condiments on top for better presentation, but the former is the actual way. 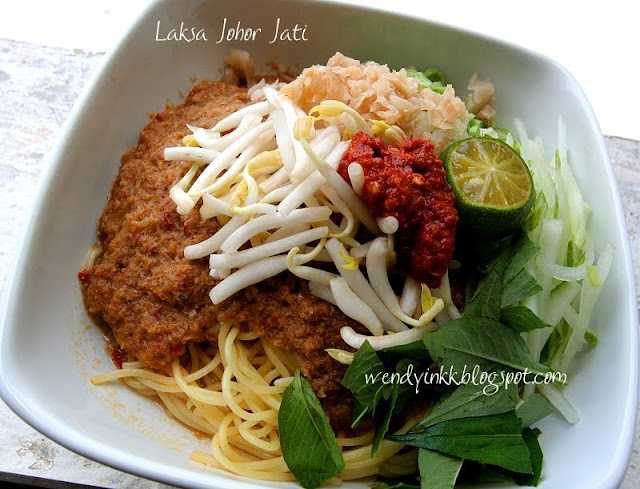 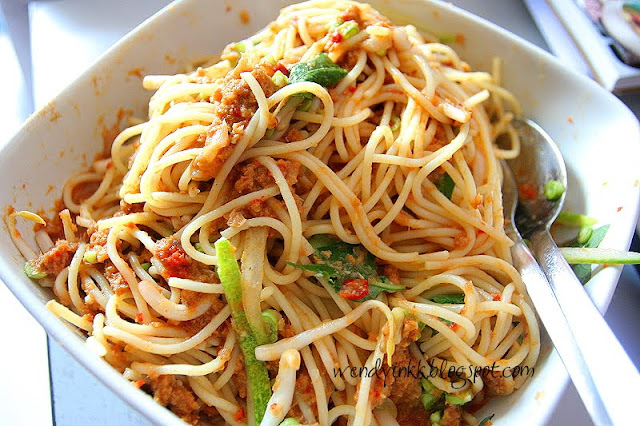