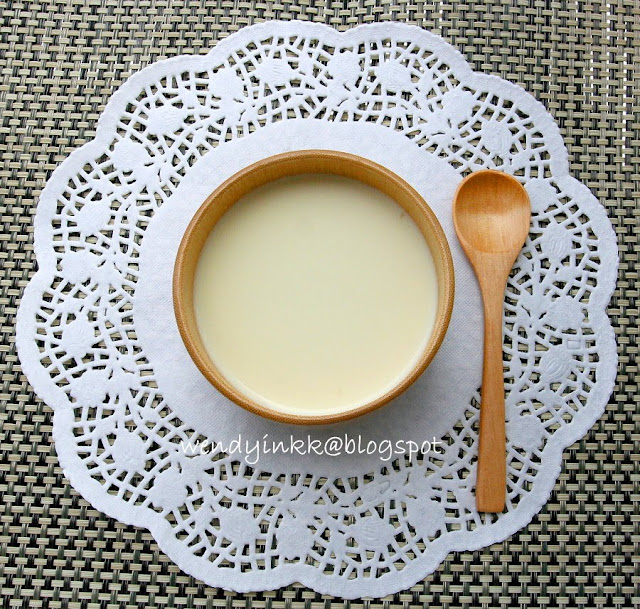 I saw on a Hong Kong eating show showing this dessert. The man just poured milk into the bowl and the host said, she’ll have that dessert in 10 minutes. So easy? Well, I’ve had this once, made from instant preparation powders brought back by my cousin from Hong Kong. It’s nice, I like it, so let’s try making it.. since the TV says it’s so easy

Ginger milk curd, also known as ginger-juice milk curd or simply ginger milk, is a Chinese hot dessert originated in Shawan town of Panyu District(My grandparent’s place of birth), Guangzhou in the Guangdong Province in southern China. The main ingredients are ginger, milk, and sugar. Water buffalo milk is used in the original recipe.Ginger contains protease. When milk is added to ginger juice, protease catalyses hydrolysis of the protein in the milk, changing it from a water-soluble form to a water-insoluble form, and leads to the formation of milk curd.
Sometimes you will wonder how much one can learn from kids, and I really did learn a lot from these kids’ science project. They did lots of experiments with this simple dessert, from getting the proper PH, the proper temperature for setting. Simply marvelous. But they didn’t test the type of milk used, pasteurized, UHT, homogenized and raw milk. If only they did this, then the experiment will be ultra marvelous. 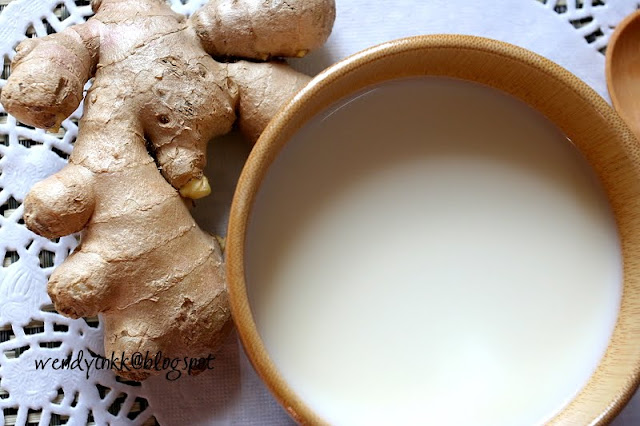 When you look at the process, it seems easy, right? I made 8 times of failed curds before I saw success. I only did 125ml each time, but hey, have to eat them up even thought they are failed curds, still edible, just that either they are too soft or still in liquid. Milk is fine..but ginger. So much???? I’m not in confinement, so my body cannot take so much of that, lest overload then deep trouble.  Hey, do you know that this is the perfect dessert for that day of the month?? Maybe you want to try making this on that day :)
I read a few blogs before I did it. All had different instructions, some to pull milk 6 times, some 10 times, some never pull but just tilt pan left and right. Some look for bubbles by the periphery of the milk, some look for steam… But all are playing the guessing game. And from many of the comments I saw (from reader’s tryouts), lots of them ended up with thinned down yogurt. I failed 8 times, some as thinned down yogurts, some still as milk.

After my failed curds, I tried searching in Chinese again. One site said,80- 85C and guarantee success. But when I did it with my pasteurized and homogenized milk, it failed. I was at 80C because I was trying different temperatures. If you want to know what brand of milk that was, it was Goodday, fresh, homogenized, pasteurized milk.

I don’t know about you, maybe you can make it, but I can’t. Until I thought of the shop that I always buy natural yogurt from. If they can make yogurt with it, definitely I can make milk curd with that. So the next day, I went there to buy my RM3 worth of raw milk (about 600ml). Worked like a charm. The surface set almost immediately (you can test it when you touch the surface and no white liquid sticks to your finger) and was fully set in 10 minutes. Out of 5 attempt, 4 set nicely and one failed* because I didn't boil the milk properly and a skin formed on top. Explanation after the recipe. 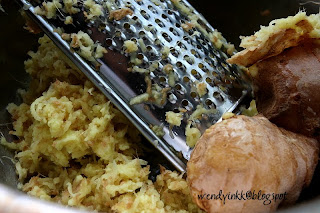 Ginger Milk Curd Recipe (do it bowl by bowl)
One rice bowl amount:
30ml (2 tablespoons) old ginger juice (Mine are the regular ones that are imported from China)
250ml milk
1Tbsp sugar 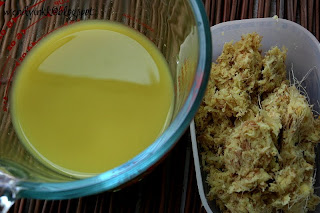 1. Put ginger juice into setting bowl.
2. Bring the milk and sugar to a boil, turn off the heat .Check temperature with a thermometer. Let it cool down to 85C. (If you don’t own a thermometer, leave the milk to cool down in the pot for 10 seconds)
3. Pour milk from 6 inches above bowl.
4. Let the curd set for 10 minutes
5. Enjoy warm or chilled.

*If you want to make more than this amount, pulling the milk might be required because a larger amount may take longer than 10 seconds to reach 85C.
If you can make yogurt with that milk, then you can use that same source of milk to make this ginger milk curd, because both processes act on the milk protein.

*When this attempt failed when all others succeeded with raw milk, the only difference was the layer of insoluble milk skin. Then I suspected that the proteins that are necessary for coagulation are all in the skin. I checked the internet and truly enough, I found on wisegeek, that when milk is heated, it forms a skin/membrane on top. The skin is comprised of solid proteins that combine with the milk’s fat molecules, which begin to evaporate as the milk is heated. These proteins, casein and beta, clump together when the liquid reaches a temperature of around 113 to 122 degrees Fahrenheit (45 to 50 Celsius). As the heating continues, the soft protein layer begins to dry out, which is why the milk forms a skin on the liquid’s surface. (So, when the protein is no longer in the milk, it cannot react with the ginger’s enzyme, protease). To avoid the skin from forming, just remember to stir it from time to time. And this does not happen with skim milk because skim milk does not contain fat. There is nothing for the protein molecules to bind with.


About pulling/stretching the tea (teh tarikking):
Some recipes call for this step, but I find that, the temperature’s way too low after pulling. From the lab experiment report, the optimum temperature for setting is between 62-67C. When I finished pulling it for 6 times, my temperature was at 50-60C (From various attempts). The temperature of the ginger juice has to be taken into account, the absorption of heat into the setting bowl has to be taken into consideration as well. And don’t forget, the pouring of milk from a distance into the ginger juice will reduce the temperature further. So, I don’t pull it anymore. And I find that, if I do it 125ml at a time, the moment I turn off the heat, I put in the thermometer to check, by the time the reading is stable, it’s already 85C, and it takes about 10 seconds. Larger amounts of milk may take slightly longer. So, I don’t find it necessary to pull the milk. Just turn it off, wait til all the bubbles go away and there, 85C. So, when it’s 85C when you pour it down, by the time it mixes with the ginger juice, touches the bowl and getting cooled by the pouring action, it’ll settle to a nice 62-67C. 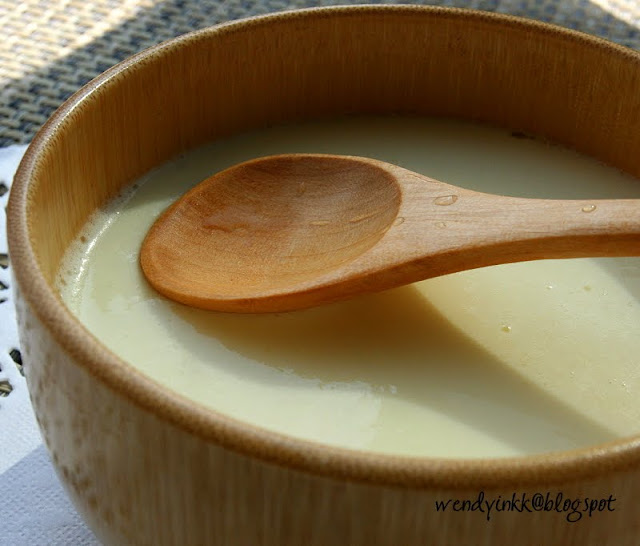 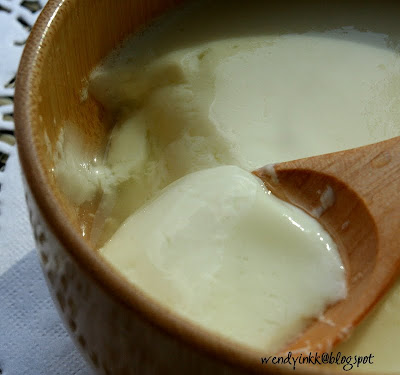 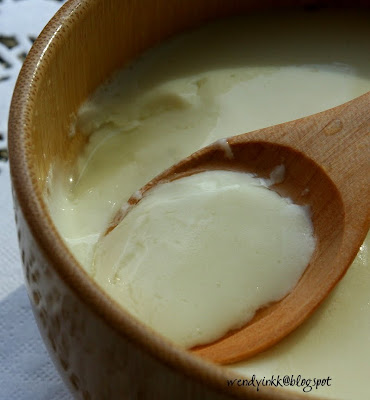 See the curd don't fall back in place... it stays put 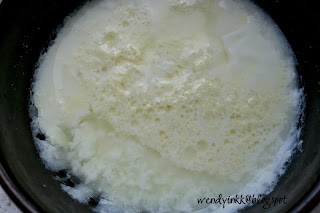 About adding vinegar to the ginger juice,
Although my attempt with Goodday was fine with vinegar, but it is not with raw milk. It curdled up, not in a good way. Click on the picture to have a larger view.

Ok, so here goes the giveaway..

Send in a link to your website/blog to this page (through comments)
Or if you don’t have a website, email me (wendyinkk at yahoo.com) the pictures and details of the milk used to me. I'll post the emailed in try-outs in the other page.

One type of milk per entry, means if you tried out 4 types of milk, 4 entries, even though it's just one post.

Details that must be included in your post or email:
1. Pictures of milk curd that shows
i. floating spoon on top to show that the curd has set firmly
ii. a spoon of the curd or the eaten area of the curd to show the texture.
2. Brand of milk used, and if possible picture of milk carton/bottle
3. Type of process: Pasteurized/Homogenized/UHT/Microfiltration/Raw/Recombined/Sterilized
4. Type of milk: Fresh/Full Cream/Low Fat/Skim milk/Raw Milk
5. Fat and protein content on label by g/100ml (leave this if it’s raw fresh milk)
*If using raw unprocessed milk, just include information on where you got your supply, and skip step 2,3 and 5.
And any other information that you think may be important.

This is to help others who are interested to make ginger milk curd. Makes life easier for everyone when information is easily available.

Others who are not from these 2 countries may also submit your curd “report”. It’ll be so nice of you to do that. We’ll learn from your experience too.

Oh yes, what’s for the giveaway?
Actually it’s not a Kitchenaid or an expensive book or some fancy bakeware….just 2 sets of bamboo bowls and spoon, like those in my pics. So, there'll be two winners.
Don’t worry, I’m not going to give you the one I’ve used, they will be brand new. I’ve bought quite a lot of these few years back, and they’re not from Daiso :)

Oh ya, I've actually tried out a few brand of milk from supermarket shelves. So far, one brand gave me fair result, not as good as raw milk, but it set with spoondable curds. I won't spoil the fun... but will spill the milk for you on result day.

Click here to see the entries and the brand that they used,
People Who Have Tried Making Ginger Milk Curd
Posted by WendyinKK at 11:15 AM