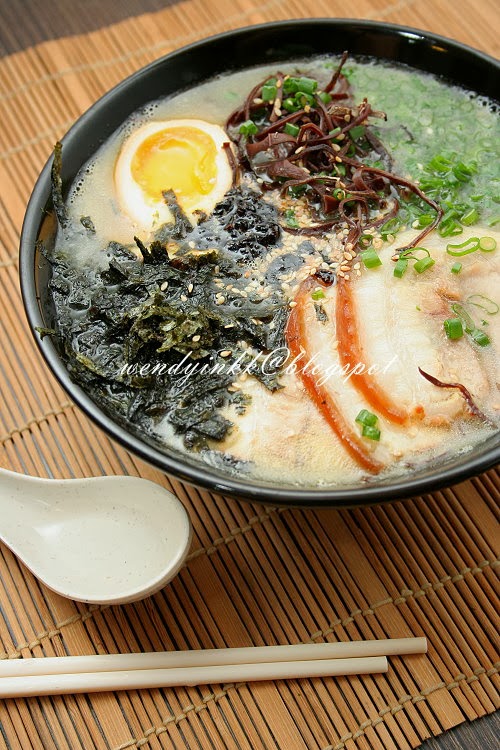 I love tonkotsu ramen.
That thick sticky broth that makes my lips feel smackingly yummy.
I read up a few recipes and there are many many versions around. Some are very very basic and some with more ingredients. 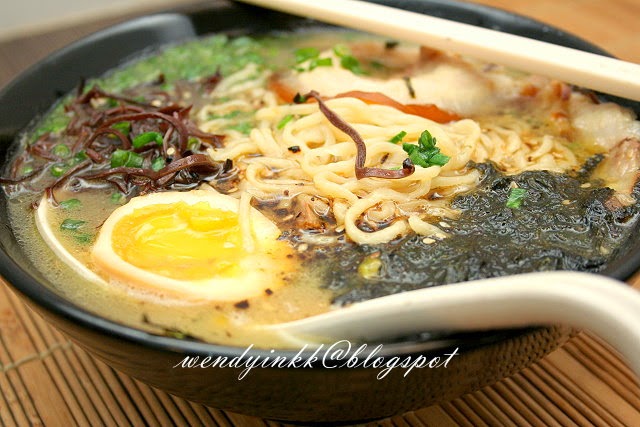 The first time I tried making this at home, I used only pork bones and it wasn't smacking enough, and so I wasn't happy with it. I just made the basic with bones and I felt something was really missing, and I remembered that Marc added in some onions and garlic. And so I tried with 1 bulb of each and.. yeah, it was it! That flavour that I was looking for. But when served with the ramen.. the whole broth just went dull. It wasn't robust enough. The sticky factor wasn't obvious too, although I cooked it for 3 days (few hours each day), following another recipe.

I told myself, I must cook this again. I called my mom to help me buy some leg bones again and she said, she has organic leg pork bones in her freezer of which she said, makes the soup even whiter, and my brother doesn't favour it. Haha, so I just snapped them over. I bought some chicken feet and saved the tips, each time I cooked chicken. When all the ingredients were ready in my freezer, I made this again with more garlic than before :)


The previous time I was also too chickened to burn the garlic. This time, I let it slowly turn black on my pan. It wasn't smoking and nicely blackened.

I also went to the extend of making my chashu and serving it with this. The few spoons of chashu gravy into the ramen added the difference too.
This time, it was spot on for me. Just the way I want it.
Good enough without MSG or whatever packaged stock.

1. Bring a pot of water to boil. Put in the pork bones and let it simmer for 5-10 minutes.
2. Discard the boiling water and wash the bones clean from scum
3. Bring 6L of water to boil. Put in all the blanched pork bones and the chicken feet and tips in. Bring it back to a boil and lower to a simmer for 8-10 hours (you can boil it longer).
4. Rinse garlic and onion. Slice the onion in to half or thick slices, leave garlic whole. Slowly pan fry them with some oil until they start to burn. Put them into the pot of simmering broth towards the end and let it simmer for 1 hour or 2 to release flavour
5. Bring the pot of broth back to a rolling boil for 10 minutes. (I feel this step is crucial if you want to push the flavours out, the colour turns murkier. If you think it's too concentrated.... don't add more water now)
6. Strain the broth and press the remnants to to release as much 'juices' as you can. See how much you have, if its too little, put the remnants into a pot and add more water to the remnants. Bring it to a boil for 1 -2 minutes and strain it again, pressing them to release the broth. (Maximising flavour extraction! LOL) Total final broth, not more than 3L, season with salt.
7. Bring the broth back to a boil when you serve. It might be a bit sticky when cooled due to the gelatin from the bones.

**I split the cooking time, I simmered the soup for 2 hours the night before and continued the next day for another 6 hours. Take note that the blanching and washing of bones takes time too, and bringing water to boil takes time. Plan your hours accordingly. Total time is more than 8 hours.
You can cook it longer than 8 hours, but when I tasted it at the 6th hour, it was almost there already, the consistency and flavour, and so I stopped at 8. It probably needs more than 8 hours of continuous simmering as mine sat steeping in the pot overnight.

1. Cook ramen according to instructions on packaging.
2. Put onto a noodle bowl. Put in 3 Tbsp of chashu gravy. Then top with 2 cups of broth.
3. Put on preferred toppings and 1/2 tsp burnt garlic oil. 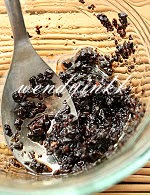 Slowly fry the minced garlic with sesame oil until it turns very very dark brown. Turn off the heat, let it stay in the pan and wait, it will darken and look black.

(Turn the heat on and off, if it still doesn't turn black enough after waiting)


After eating this for dinner...and then for supper.. my husband and I looked at each other and the bowl of broth left behind. We decided not to drink it. LOL. Better not overdose although it taste so good. 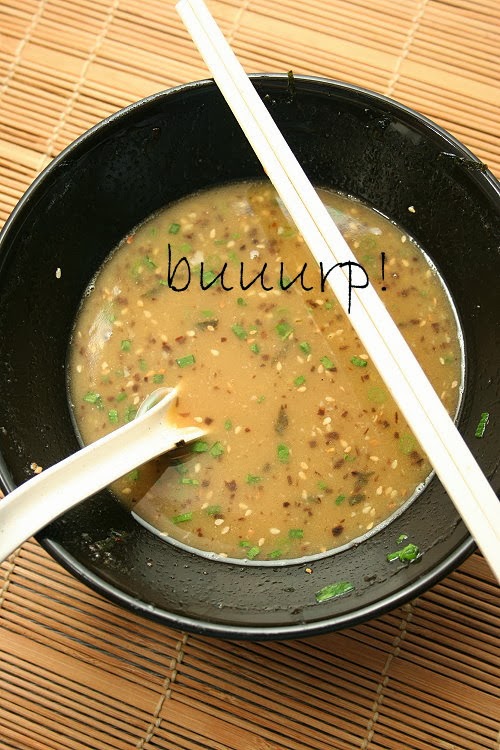 I am submitting this to Asian Food Fest Japan Month,
hosted by Alan of Travelling Foodies
Posted by WendyinKK at 10:30 AM