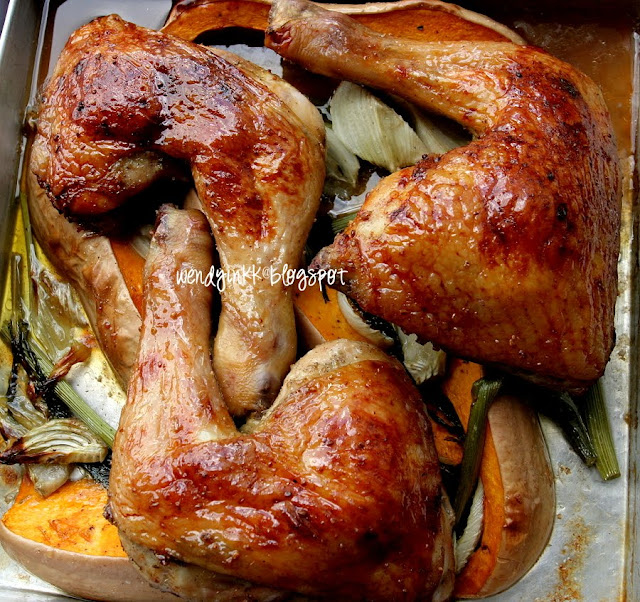 I saw some fennel at Jusco, locally grown at Camerons. Whoopppie!!! They were cheap!!! I didn’t know what to do with them but I bought them anyway cos I was told, it’s a new produce and it’s not sold often. I’ve seen fennel growing in Camerons before, in Mardi Park in Tanah Rata, but I never knew Cameronians will one day plant this to sell.

Then I saw Australian butternut squash. Usually they are pretty big, but this time I saw some small ones. The name is really enticing, butternut. Is it really that buttery? I won’t know until I’ve tasted it, and that’s for sure. This baby cost me almost RM14. Hahaha!!! The big ones will cost me more than RM30. Crazy!!!
Then I came back and searched on the internet high and low for recipes… and I don’t’ want soup. No fennel soup, no butternut squash soup. In the end, I settled down with roasting them. 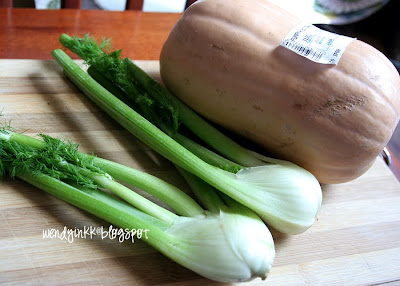 2 bulbs of fennel (rather small when compared to imported ones, if imported ones, 1 will do)
Some salt and some pepper
Few cuts of Butternut squash, just as a rack and part of the meal later on (You can substitute with pumpkin)
Some butter and 1 tsp of honey for each leg

1. Mill salt, fennel seeds and black peppercorns until fine.
2. Rub (1) onto chicken legs.
3. Marinate them for at least 1 hour (do not stack them, and leave them uncovered in the fridge to dry up a bit)
4. Preheat oven to 180/200C.
5. Place butternut squash onto baking pan. Slice fennel and sprinkle them over butternut squash. Season with a light sprinkling of salt and pepper. (just like what Jamie Oliver usually will do)
6. Place marinated chicken over fennel and butternut squash.
7. Thinly slice some butter and lay them on the chicken.
8. Bake for 30 minutes until golden
9. Remove chicken frm oven and quickly brush (I just use the back of spoon) 1 tsp of honey on each leg.
10. Pop them back into the oven for another 15 minutes. They will be very golden when done.

The chicken was just nicely cooked, saltiness level perfect. The roasting juices were wonderfully sweet!!!! Not sweet from the honey but from the chicken, butternut and fennel. What could be better than to have some rice to soak up all the gravy… err.. you may like mash potatoes, but we like rice. And I made some garlic rice to go with it. (Recipe for garlic rice, later) 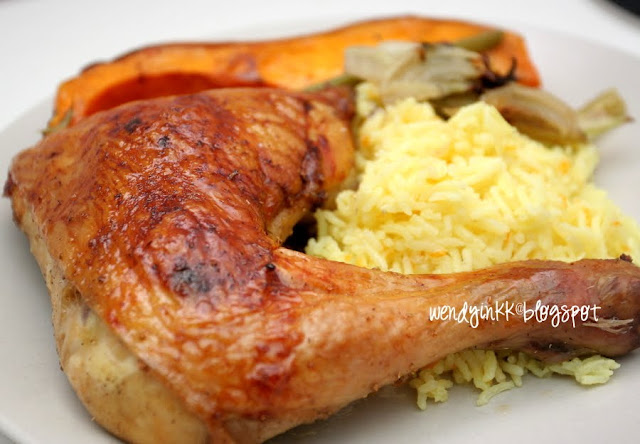 If you ask me what does fennel smell like when raw.. a bit like celery, a bit like parsley.
What it taste like when cooked… Celery, the bottom white part of celery. Just that it has more texture to chew on. 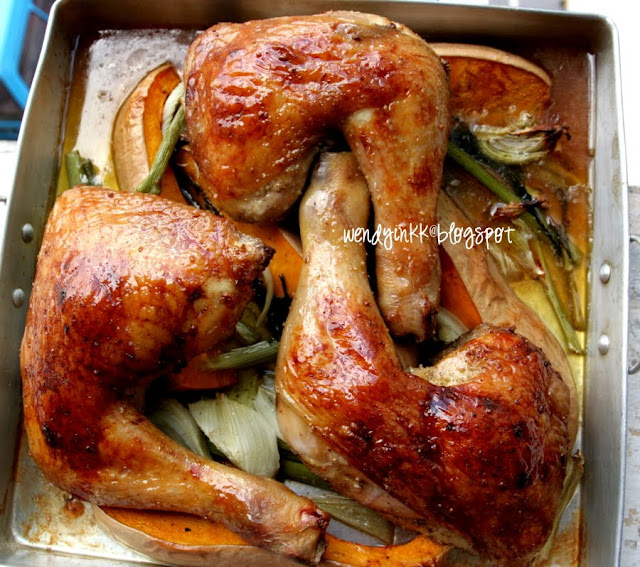 Any of you have any recipes to suggest me for fennel?? Preferably no soups and salads.
Posted by WendyinKK at 11:07 AM