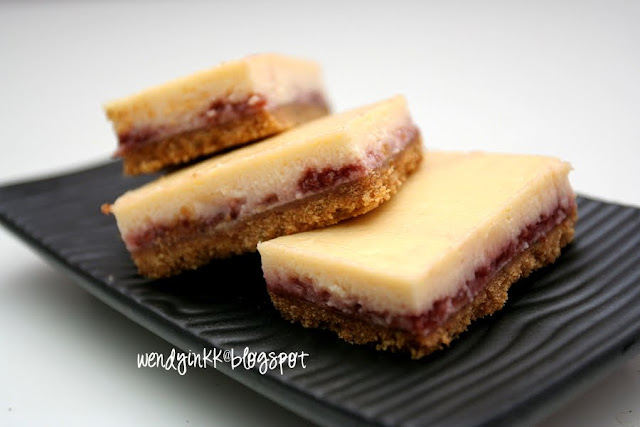 I had some digestive biscuits that I bought almost a year ago because they were on offer and Lydia at that time was loving them, but after I bought them she stopped eating them. So, well, I kept them until now.

I had a bottle of Raspberry jam, newly bought from Jusco the other day.

I had some whipping cream, frozen, left over since the White Chocolate Mousse with Strawberry compote.
When they have been frozen, they can’t be whipped again, therefore can only be used for cooking or cheesecakes.

I have butter, eggs and sugar, definitely at home.

Then I saw this at Peabody’s. Ah-ha, I could just adapt my stuff and make this.

But alas.. it didn’t came up as it was as Peabody’s . Because I used more egg and less cream cheese, the batter was more liquidy and didn’t support the raspberry jam. Oh.. nevermind. Just eat it as cheesecake. Just as nice.

The lime thing was really good. Sour, tangy, and the crust was limey..

1. Preheat oven at 160/180C
2. Line a 7 inch square pan with overlapping baking paper.
3. Combine crushed digestive biscuits, butter, sugar and lime zest and mix well. Press into lined pan.
4. Bake crust for 10 minutes.
5. Meanwhile prepare cream cheese filling. Whisk cream cheese and sugar until smooth. Put in egg and mix until smooth. Put in whipping cream and mix again. Then lime juice and mix.
6. When crust is baked, leave it to cool slightly. Pour cream cheese filling onto crust and dot with 1/3 tsp of warmed raspberry jam, all over.
7. Bake for another 30 minutes until filling is all firm and the top has taken on some colour.

** The raspberry jam don't seem to be in dollops are being baked, but rather spread out on the bottom fo the cheese filling ontop of the crust. 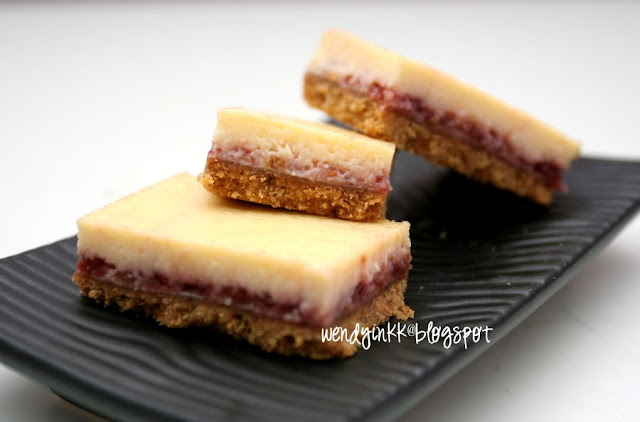