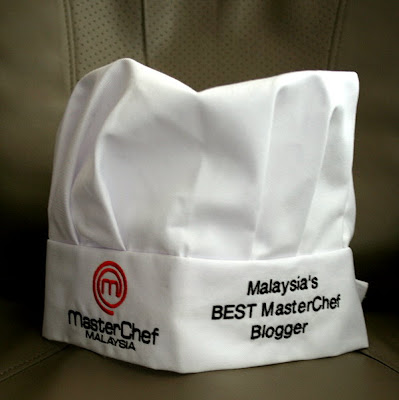 I won it??? Seriously, I'm still trying to suck it in.

Swee San and I forcasted so many things.... and when I arrived early at site, I saw, so many dessert prone ingredients. It wasn't a pressure test, it's an invention test again, but with limited ingredients to choose from.
The "black box" was small, as small like a sliced cake box. I quickly called Swee San, "Eh, looks like fritatta ingredients la, with mushrooms, eggs, cilantro, tomato and maybe another soup, cos got bauguette and canapes. could be pancakes too, as there are honey, chocolate chips and flour. Cupcake liners are provided too! Swee San quickly guessed, in the box could be a fruit, since it's so small, and there are dessert ingredients provided! 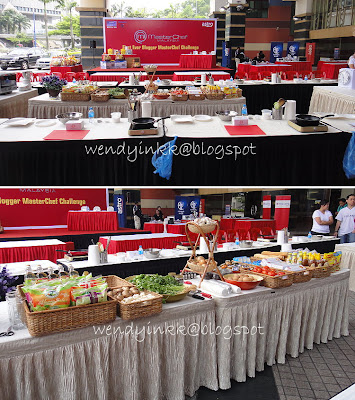 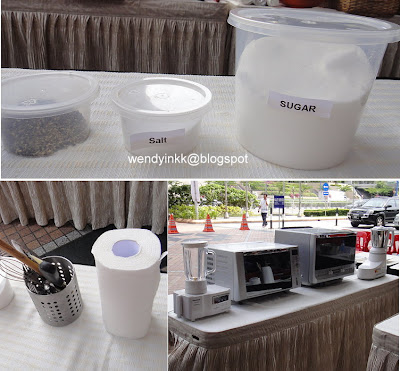 I quickly thought hmm... do a pancake, then maybe make a compote, stack it high, that sort of stuff. Or if make appetizer, bruschetta or soup, I'll be fine with it.

Then, came the time to open up the box.

Swee San was so right. It was a fruit in the box indeed. But we never could've guessed it's not a sweet fruit like AVOCADO. 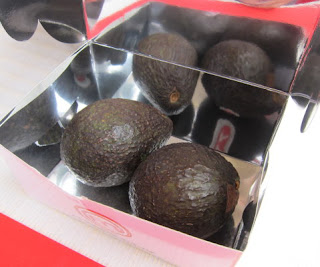 Gosh! What can I do with it? It's the core ingredient and it must be prominent. I've only made salads with sliced ones, drinks with blended ones and the weirdest was as a pasta sauce. But, there's no pasta today!!!!

Immediately I thought of a salad I once did (not posted yet), with pancakes made noodle like and there's mushrooms and vege in it, exactly everything was provided today, except I won't be dressing it with walnut oil, but avocado cream. Ok, I'll make that. We were then told to pick up only 10 ingredients from the provided stuff.. I took flour, eggs, cilantro, mushrooms, onion, tomato, lime, packaged salad mix, butter and milk.Exactly the 10 that I'll need. 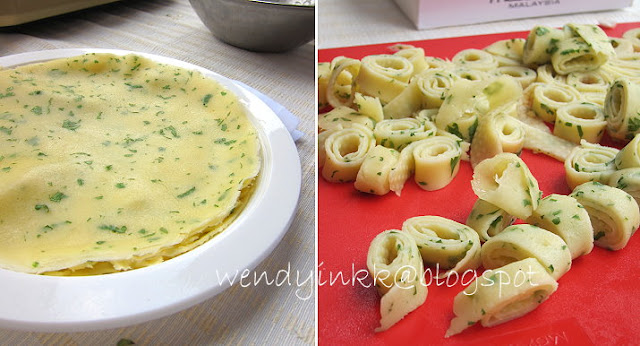 Fried the pancake, sauteed the mushrooms, sliced the pancakes and made the cream. Started plating and I laid the avocado cream on it. Shiiiiiiiiiiiiiiiit.  A bad feeling suddenly surged and it seemed so familiar. Dejavu.......Oops, I've did it again. Just like how I felt when I did my Malay language paper back when I was 17 for a national level examination. Exactly the same feeling. I asked myself, "What am I doing now?". This feeling of uncertainty just came... and it got all over me. I just finished up the dish and gave a big sigh. Just die, and die with dignity, at least I completed it. (Chinese likes to use the word "die" as a figure of speech for something bad that has happened or will happen, not literally meaning death)

If I were to tell you how come I'd feel this way. I don't know, I wasn't sure of the combination of flavours that I did. They were great as individual items, flavours well balanced, netiher too salty or too much of anything, just very well balanced and pretty tasty on its own. But when they are combined.. I'm not too sure. Not sure at all. Some things are pretty much better on its own than to be wrongly paired, then that could spell disaster.

Worse, when I completed it.. I recieved comments saying that they actually thought I'd stack up all the crepes I made, and fill them with layers like a mille crepe. Ya hoh, why didn't I think of that. Why? Why didn't I make it look more presentable, instead now it looked like a pile of mess. Why? 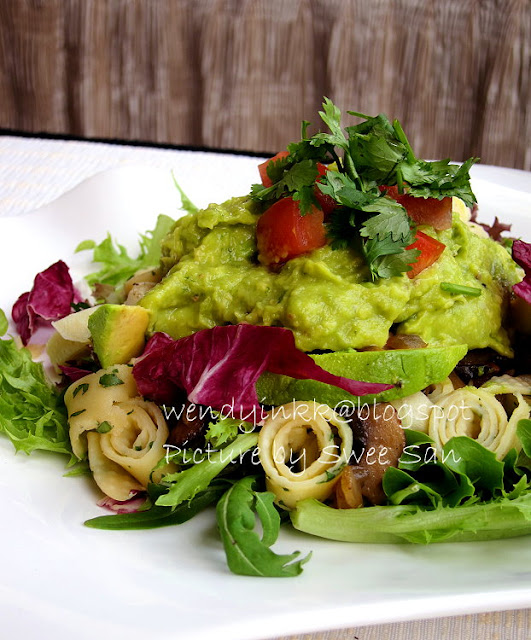 I looked around......... everybody's creation looked so presentable, and mine was a pile of duunowot. My friend said, mine is fine, and she asked me, can win or not, I told her, nope. I've flunked big time this time. I told her, I will only win, if everybody else has oversalted or has wrongly seasoned their stuff, simply because I'm sure my seasonings were well balanced. Presentation and flavour combination..... I'm very negative about it.

When the time came, I went to present my dish, Chef Kerlley was the first to say, "Very colourful". Then I thought, eh, isn't it a pile of mess?
Then one by one, the judges took a bit of the pancake ribbons and dipped it in the avocado cream, and they took seconds and thirds. I was like, "Uh, that nice meh?".
Finally the comments came. (watch it in the video below)

My eyes went bigger and bigger with each comment. Almost wanted to burst with tears as I never, never expected such good response from them. I thought I flopped big time. The biggest pat on the back was when Chef Kerlley told me to leave the plate on their table so that they can continue to eat it. Did my plate stay on the judges table? LOL, the emcee said it'll be better to let everybody taste how good it is. And then so many came asking me whether they can try my dish. In a matter of minutes, my dish was sweeped clean, everybody told me it's delicious. My buddy told me, the best was indeed the avocado cream, if only I piled on more of that. She told me usually it doesn't taste that good as avocadoes can be bland, but my avocado cream has a burst of flavour and she told me, it felt so refreshing, as if she's walking in a garden. Swee San also said the lime added a refreshing taste to the cream.

Well, at least now I can take a breather... phew! Not that bad, still can straighten my neck a bit, don't need to hang that low. But will that be good enough to make me win it, I doubt it, truly doubt it. I still don't think it's that good.

The skills test was chopping onions and.. hahaha.. 6 out of 10 contestants cut their thumbs with the docile looking ceramic knife. Cutting vertically wasn't the problem, but we were requested to chop the onions exactly the same way it was demonstrated. And when we made horizontal incisions, that's when the 6 of us got a bandage on out thumbs. I did quite well, but got some skin in it, LOL. When I was peeling the last onion, I was literally scratching it off because it was so hard to get off, so bits of the skin flew into my chopped pile. Judges commented, texture was fine and good, but got skin, LOL. Ok ok... still not bad.

When they announced the winner, I was like "Huh, really me?" Okay...

There wasn't any camera man that day.. so, it won't be broadcasted anywhere..but...... I had a camera woman! And she's Swee San. See the video below. All credits to Swee San for taking the pics and preparing the video. Thanks girl!!! She recorded the judges comments. Hear it for yourself. 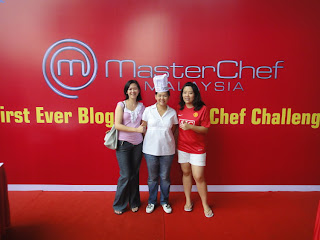 It's sweet to have my good buddies around, Wai Wai and Swee San
I was smiling..but after all the hoohah.. I was still asking myself, is it that good?
And up til today, I'm still thinking of ways I should've done instead.... Avocado Stuffed French Toast, Avocado buttercream cake (yes, with my sponge pancake method right on the pan) or maybe do mini cakes with it.

I'm not jumping with joy unlike how it felt during the semi finals, because I just don't feel like a winner inside as the dish itself didn't win my heart the cook herself. Sad, but true.
Posted by WendyinKK at 11:14 AM