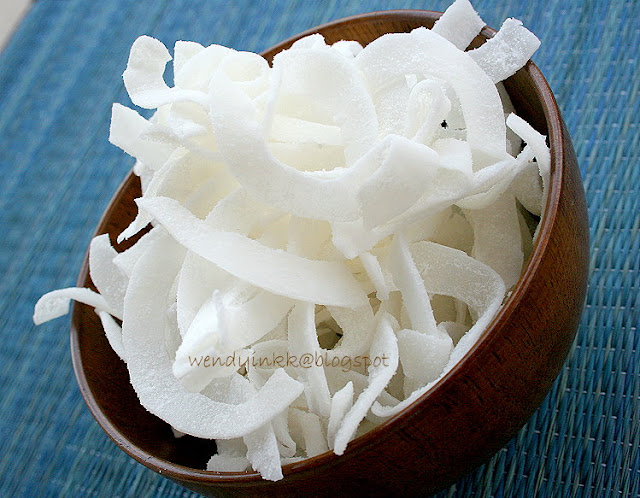 I made candied coconut with gula melaka (palm sugar) way back in 2008. I was very very satisfied with the result. So, with another blogger meet-up coming up (I'm the last to blog about it, so I'll not go into the details, you can read about it at Sonia's, Swee San's, Reese's and Pei Lin's), it's a good chance for me to make this again, since making too little is a bit too wasteful and too much for personal comsumption is not a good idea :)
Good things are meant to be shared, HAHAHAHAH!! Don't ever get fat alone, LOL. 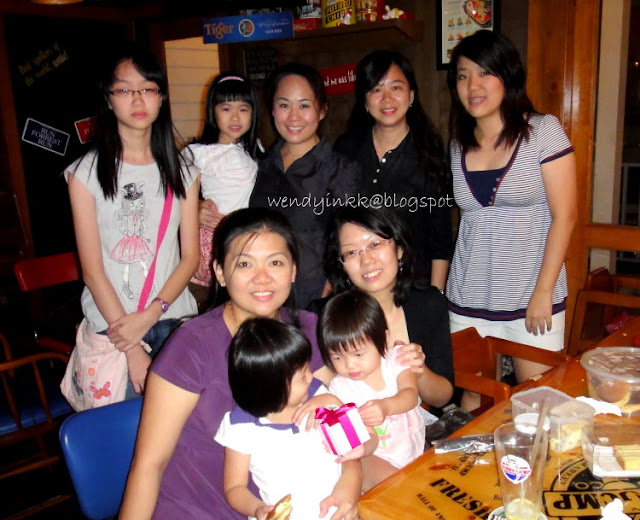 So, you must be wondering, where did I get my coconut flesh.
From the wet market!!

*
Long ago(20 yrs ago), we could only buy grated coconut from the market.
*
Sometime back then (about 15 yrs ago) , we could buy freshly squeezed coconut milk from the market, and it's made with coconuts that were halved and grated by holding the coconut halves against the electric grater, then the grated coconut is poured into a machine to get the milk out.
*
The latest : You won't find the electric grater with a sharp ball and a upright basin at the wet market.
What you will see is a grater that works like a paper shredder. Put the whole pieces of flesh in the upright feeding hole, and what comes out is finely grated coconut. Then the grated coconut is then poured into the extrator and milk comes out :) The latest method is a lot lot faster!
*

This time, I made 2 versions, the old palm sugar version and I tried out the old fashioned white sugar version. 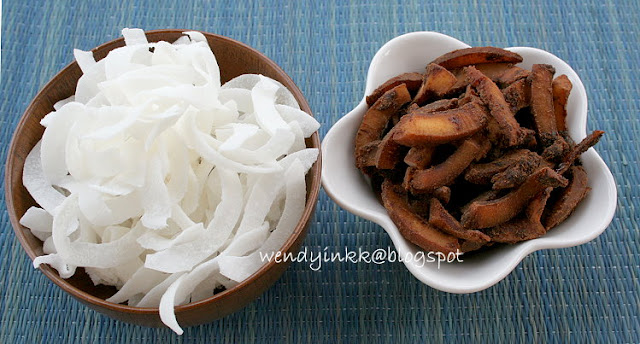 Just keep the ratio of sugar to coconut, 1: 2 and you'll be fine. Means, if you used 1kg coconut flesh, use 500gm sugar. And I mean cleaned peeled coconut. Not the initial weight that you bought from the market. Last time I used the weight I bought and ended up with too much sugar in the pot, a bit wasted. 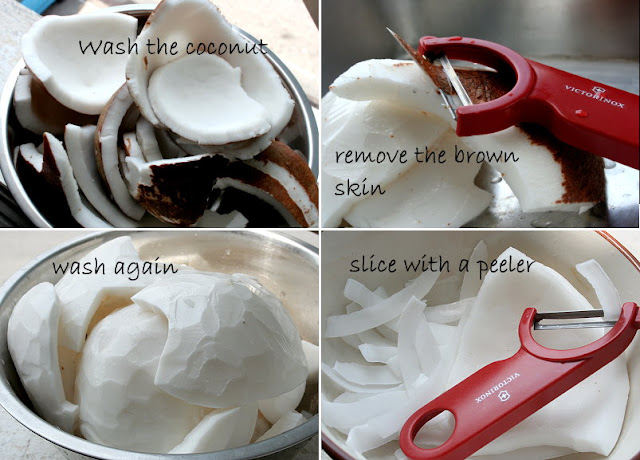 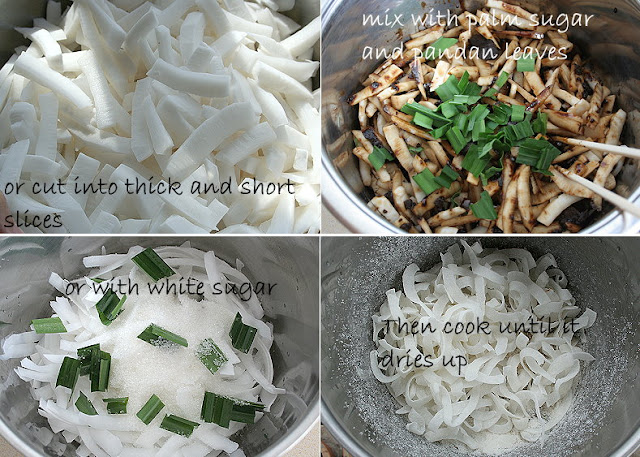 Cook on medium heat until the whole pot of coconut looks watery and reduce to low heat to cook until totally dry. Stir and toss with chopsticks not spoon. Stirring is only needed occasionally until it looks almost dry, then it has to be all the time.

So, here's how the white one looks like immediately after cooking. Pretty dry right? And nope, the base is not burnt. 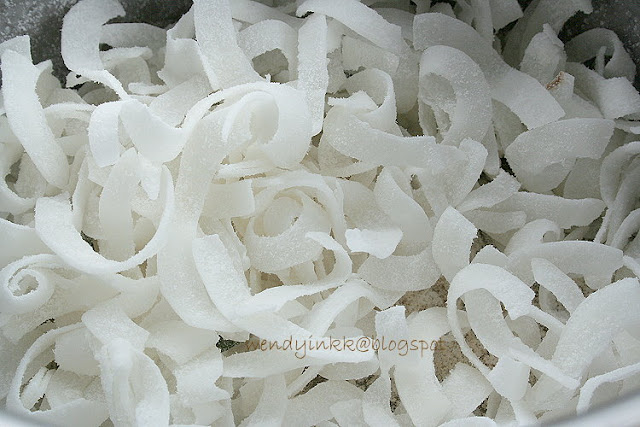 Not too difficult right?


And one thing, I want to share with you.
If you think that you want to buy the purest and best gula melaka to make this snack, DO NOT DO THAT! 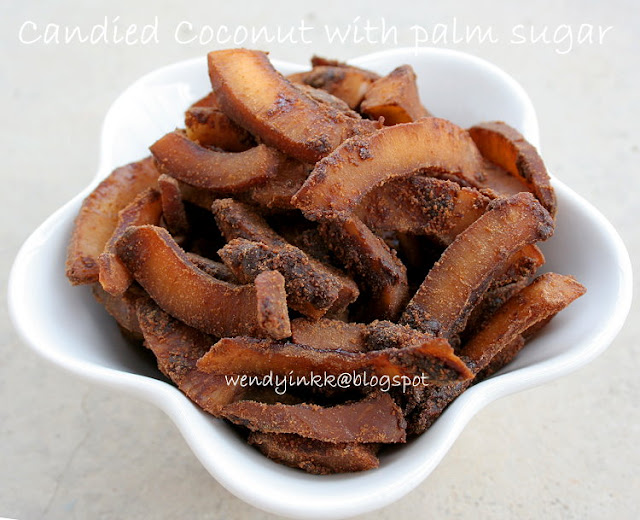 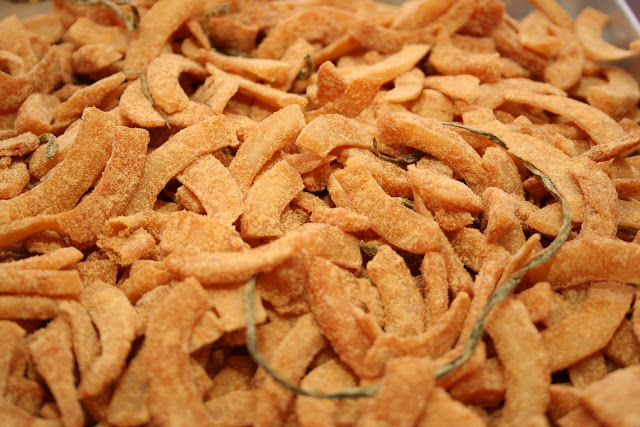 Can you see the difference of my latest attempt with the old one?
One looks dry and one looks clumpy with sugar.
Last time, I used those light coloured palm sugar (light brown not Thai milky coloured ones), which are a lot less pure(made with added white sugar) and are harder.
Pure ones are soft and moist, crumbly when pressed and definately needs refrigeration, if not it'll sweat.
Using pure ones is a bad decision.
I forgot that raw sugars like this are acidic, and when it's acidic, the sugar won't dry properly and stayed in clumps. So in times like these, better buy the less pure stuff so that you can have dry dry coconut, not clumpy ones.


And if you're wondering what am I wearing in that pic? Looks frumpy... Well, it's a maternity dress.
Yes, I am almost 4 month preggers now and the baby's due early June.
I haven't been cooking or baking since early October (unless I have no choice), up until 2 days before the lastest blogger meet (just last week), and yeah, the blog is running with no baking and cooking in my kitchen and it could still run with daily posts until March, yes it's that crazy.
Baking and cooking mojo has been on super low gear during the 1st trimester and I'm glad it's back now.

But I won't be on high gear til very much later, I'm busy busy busy now, and hopefully by Jan, I'll be moving into my new house with a new oven and a few more new toys.
Posted by WendyinKK at 11:15 AM